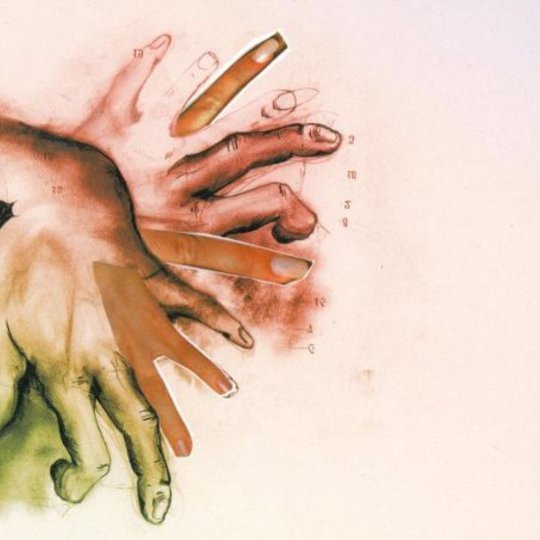 Brooklyn's Emanuel and the Fear return with the short but sweet Hands. It's a release at once smart, topical and intensely personal, proving once again that thoughtful music survives amidst the ruthless buzzocracy of the New York City borough.

For a while now Emanuel and the Fear have been known mostly for their outlandish member count, numbering into the double digits. You expect that sort of thing from orchestral rock. Beyond frontman Emanuel Ayvas and the standard rock toolkit, the Fear includes both string and brass mini-sections. You also expect, with some justification, that the sheer gumption involved in packing that many musicians onto average-sized stages would elicit above average interest in the spirit of naked shock value. Maybe so anywhere else but Brooklyn. But in the indie band capital of the world it's hard to shock anymore. After years of local gigging, national and international tours, a few critically-acclaimed releases, it's still difficult to think of Emanuel and the Fear as more than another local band with barely a head above water.

That's the curse of being a medium-sized fish in a big pond (an ocean, to speak the truth). In a more diminutive setting the ensemble would be prized for sophisticated compositions that tease rock power out of the delicate capabilities of orchestral textures. That's rare stuff to pull off without sounding corny. But all that beautiful precision comes at the price of – how to put it? – a certain nerdery. Emanuel and the Fear give off heavy middle school orchestra vibes. You know, spitballs, acne, and music stands. None of that is worth a damn when assessing the quality of the music, which is marvelous, though it does make the heart cringe a bit with the knowledge that bands like these rarely get the attention they deserve. The next hot buzzband, Emanuel and the Fear are not.

But who can deny the talent? There's a silver lining to being tolerated if not adored. The ensemble is free to play things their way, and Emanuel and the Fear have never made better use of their freedom. Leadoff single 'Over and Over' sparks up Occupy Wall Street themes, which are further developed in the outcry of cultural exhaustion in 'Vampires'. The two tracks 'Song For Rain' and 'Purple Sunless Sky' go against the grain by shedding the full orchestral accompaniment for minimal a cappella, with the latter exploding into one of the most ambitious, experimental soft-noise freakouts Emanuel and the Fear have committed to tape yet.

Hands is an adventurous EP from a band following its own star. Not just musically, politically as well. The songs on the album tell a story, chock full of cultural critique, delivered via the rootsy, country vector of orchestral rock. It's a combination that's a little bit unexpected in the scene and setting that Emanuel and the Fear have chosen to set up shop. At times this makes for a tough sell, but as long as they get to make the music they want to make, it's hard to see why you, or I, or they should give a damn. Long live symphonic nerdery!