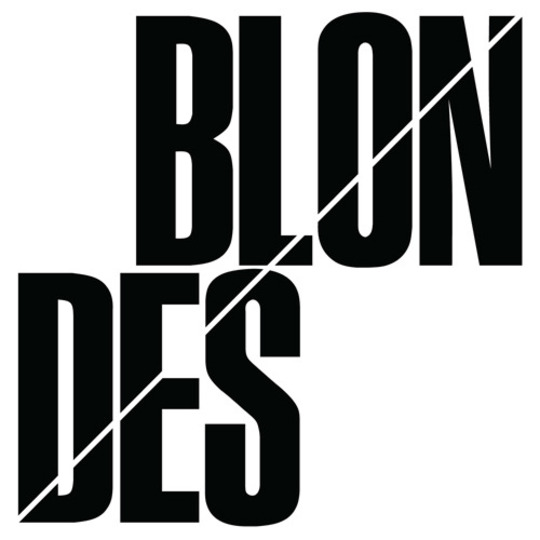 In the year twenty-twelve, whilst the LDR virus was infiltrating the Gagatorium and a strain of brain-drained hairy creatures moved their mouths to allow grunts about the death of guitar music to plop out, the responsibility fell to those not reaching for a noose to make a mends....REDACTED

....and this is why I love Blondes (or B L O N D E S as I prefer to write it) because they take me away from all of these thoughts. This, their self-titled debut album is nothing short of devastating. Call it sigh-fi, slow-wave, disso-dance, tranbian, trance-andental, throbtronica, shoeadelia, droneadelica, gaaasssp, bass-gaze, cat-gaze, lazer-haze or whatever silly genre your care to name... They are Sam Haar and Zach Steinman, and they met at Oberlin College back in 2003, where they studied electroacoustic composition and studio art. They’ve lived in Oakland, NYC and Berlin but now reside in Brooklyn. Yet none of these things really matter when the sounds they make sound so distant from humanity. Not distant in an alien sort of way, distant in that it sounds more like machines interpreting the human spirit than two dudes twiddling a sequencer and lifting their fingers off and on the keys of their synthesizers.

Pay it no attention and this album will pass you by. Pay it too much and it’ll suck you away, far off into its vortex. There’s no in between. You’re either riding the groove, being driven along by the rhythm or it's just humming away to itself. Get too close and it becomes a blur and step too far away and you can’t see, hear or feel any of the texture. In fact I’m pretty sure it never quite comes into focus (at least not in the window of time this reviewer has had his mitts on a promo copy of it).

Much like The Field’s illuminating From Here We Go Sublime or Luke Abbott’s Holkham Drones, each track on this collection of the duos series of 12-inches released last year takes you on a different voyage, which isn’t too dissimilar to the next or the last trip it took you on. And every minute of it puts a rapt grin above my chin. There’s a awe-inducing majesty to the moments when all the subtly introduced parts coalesce and then ebb away but there’s also a sense of feeling completely lost, as if every ounce of euphoria you just experienced is more of a fading dream than a ‘song’ or a ‘composition’ or whatever the hell you wanna call these ‘pieces’. Pulling this record apart and picking out one track over another seems pointless (isn’t everything?) and every second you’re reading this, is another moment of your life you’re not spending escaping and fully immersing yourself in the throbbing bosom of Blondes.

I’m no electronic music expert, I just like what I like. And the thing I like, the truly great thing about repetitive 'dance' music that awes me, is that it keeps raking up its own very recent past but is always pulsing toward a future. It recycles itself, essentially. Like a wheel within a wheel... It repeats and keeps on repeating an idea, all the while slowly evolving it. Each mutation in a song becomes another pixel on the path an entire genre is wandering down... This may sound over the top but spend a few hours walking around with Blondes in your ears and small ideas seem more impotent than normal. Perhaps this is the meditative thing that people always talk about in music or maybe this band are just my eureka moment, when all those years spent politely nodding my head to IDM records has finally paid off. This is bliss, it’s that simple.