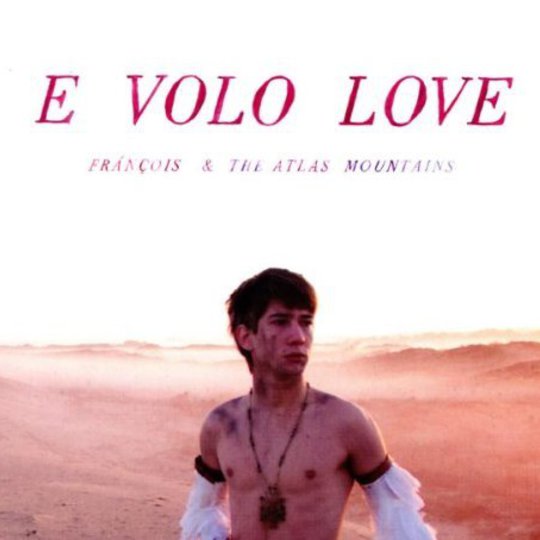 E Volo Love (read it backwards), the first major release by Fránçois & the Atlas Mountains since signing to Domino Records, is a gorgeously pretty concoction: an album full of nostalgic, wide-eyed innocence and windows-open, late night road trip escapism. Essentially the creative outlet of Fránçois Marry from near La Rochelle in France (who divides up his songs between both English and French tongues), he and his band eschew the general stereotype that our nearest overseas neighbour is generally excellent at anything electronic-tinged and generally dreadful at anything guitar-inflected. E Volo Love is evidence of work that remains in progress, but also evidence of a band who can craft some delicate and wistful melodies, swishes of vivid colour and a genuine air of romantic charm without ever crossing that dreaded boundary line into schmaltz and overbearing twee.

In amongst the grandiose sweep of sound and the lushly decorated curtains, E Volo Love reveals itself as a pointedly anglophile album at times, full of nods towards Nineties Britpop acts (the guitars hint at Blur, the starry-eyed whispers of Fránçois recalls some of Brett Anderson’s softer moments and there are hints of Pulp scattered about here and there) as well as elements of late Eighties chime and jangle. But it moves far beyond that, displaying an impressive musical vocabulary from several different sources, genres and even continents. Opener ‘Les Plus Beaux’ is full of afrocentric shimmer and joyous tumbling vocals, as is the terrifically elastic souk-soul of ‘Edge of Town’; displaying a profound understanding of how to combine Arabian and African influences while keeping everything sounding instinctive and natural. ‘Cherchant Des Ponts’ on the other hand, is a contented sigh of stirring strings, heartfelt vocals and a glorious disregard for anything other than its own inherent prettiness. And the atmospheric ‘Buried Treasure’ manages to recall the very best of the early/mid Nineties London guitar scene but with the lager replaced by Côtes du Rhône and the Marlboro replaced by the Gauloise. But best of all are the beautifully restrained ‘Bail Eternel’ and the glorious ‘City Kiss’; a song which sits somewhere between We Are Beautiful, We Are Doomed era Los Campesinos! and British Sea Power’s more pop-orientated flirtations. ‘When they hit their mark, Francois & the Atlas Mountains prove a tremendously effective musical force. The closing ‘Do You Want To Dance’ effectively returns us back to the north of Africa, but this time winding down at the very end of the evening; the band choosing to sit in soft introspection while the other participants spin away; the colours and lights gradually spiralling out of view.

If there’s a light frost of criticism to be spread over E Volo Love, it is that it is occasionally too concerned with making droopy-lidded eyes at the listener to notice that the tracks begin to drift along without particular purpose. ‘Azrou Tune’ is sweet, but ends up meandering rather than striking for anything particularly memorable. Similarly, the soft squelch-funk of ‘Slow Love’, though full of delicate and subtle touches, is never quite strong or varied enough to rise above the level of endearing lounge music. And despite being an interesting and well-constructed track in its own right, lead single ‘Piscine’ is horribly miscast and out of place in the scheme of the record – it simply does not seem to belong where it appears and dissipates a lot of the subtly nostalgic tension that has been steadily gathering throughout the second half of the album. But the hits certainly outnumber the misses and for a foreign-language band attempting to break waves across the channel, it’s an impressive and surprisingly strong album with a broad and intelligent set of influences that span across the continents: from the shores of Africa to the West Coast of the USA; the scratchy underbelly of UK indie-pop to the sunnier climes of France.

It will surprise no-one that they sound more natural and free when they sing in their native French tongue, but the tracks sung in English are far, far beyond any vowel-rolling cliché and are actually rather sweet and touching. There is a considerable amount within Fránçois & the Atlas Mountains expansive scope and vision to admire and if the general public are willing to accept French language into their world, their warm musical charms could comfortably find a place close to the hearts of music fans with a love for such sweetly poignant and intelligent pieces of songcraft.