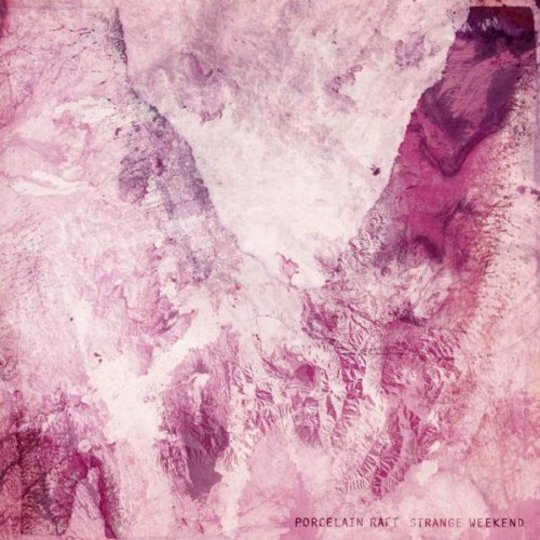 Let’s get straight to it: listening to Strange Weekend leaves questions lingering, even if they might not be apparent at surface level. This debut full-length offering from Porcelain Raft is a perfectly charming set of endearingly sweet lo-fi dream-pop, the sort where the emotional signposts are obvious even if the specific words written on them are not. ‘Unless You Speak from Your Heart’ is an alt-pop song of the brightest hue, all wantaway wistfulness and a hook that sticks around long after the rest of the song’s packed up and gone home. ‘Shapeless & Gone’ is another that, in its jangling guitars amidst surrounding blushes of reverb, occupies a space between dream and reality which is held together again by vocals of a deceptive strength. These are lovely words to use to describe a song, because these are lovely songs – really lovely on a couple of occasions – and yet, in many ways the real fascination of this album is not what’s been included, but what’s been left out.

First of all, unlike many of the reverb-drenched faded-glo pop artists who’ve worked their way through the internet over the past couple of years, Mauro Remiddi – the man driving Porcelain Raft – is nudging 40, getting on for two decades older than the likes of contemporaries such as Youth Lagoon and even over a decade older than relative later bloomer Active Child. Yet tracks such as ‘Backwords’ and ‘If You Have A Wish’ belie the preconceptions that come with that. The former laments the loss of a partner with a heart-on-sleeve pain as strong as that which would greet the end of a first love; the latter feels almost wide-eyed despite its melancholia as Remiddi imparts the repeated refrain “if you have a wish, say it now” amongst crushed percussion and below-the-fore synthetic arpeggios. Where’s the world weariness, the sense of seen-it-all-before in matters of the heart? The artist opts to keep the black spots of his hidden, Strange Weekend very much blossoming with the sense of a life yet to live - despite the fact that (secondly) he’s already done rather a lot with his.

Remiddi has an interesting history as a musician that seemingly evolves chameleon-like every few years. The past has seen stints caravanning with the Berlin Youth Circus as a gypsy musician, writing film score music, including for the 1997 Italian short La Matta dei Fiori, and performing his own composition in New York as part of tap dance show ‘Vaudeville 2000.’ Directly before Porcelain Raft he was part of the compact-sounding indie-pop group Sunny Day Sets Fire; yet he revealed perhaps the most interesting stage of his musical journey to The Stool Pigeon last year, reminiscing about a 1992 visit to North Korea where he and his band represented Italy at the totalitarian state’s Spring Festival – a journey that saw his group coerced into posing for propaganda photos and forced to stand still whilst performing. With that sort of scrapbook of memories behind him you could surmise that Remiddi would make a rather intriguing folk artist should he wish to take that path.

He doesn’t here though, not explicitly anyway. Sonically the songs are strong: ‘Is It Too Deep For You?’ shuffles with a nocturnal restlessness, the clashing of background noises and wayward echo treatments pushed onto his voice giving the effect of him teetering in front of a vast drop behind; ‘Put Me To Sleep’ contrastingly scuttles along with a plucky upbeat skitter. But the themes within such songs are universal, of love gained and lost, late night trysts and early morning longing.

What the Italian does touch on is travel and the sense of temporary location and existence, uttering “how great is it to live in a brand new world?” on ‘Put Me To Sleep,’ intoning that “one day we’ll disappear” on the droning ‘The End Of Silence,” and, perhaps most poignantly, wishing “I had nothing more than what I have” right at the end during ‘The Way In.’ It’s these snatches of lyrical content that perhaps explain best the lack of true autobiography in Strange Weekend, imbuing in their meaning a sense of constant present in their writer’s perception, and of a will to always look forward. That’s no criticism of Remiddi at all – indeed the disparity between what could’ve been told and what has is what makes him a fascinating character - and emotively this isn’t an album found wanting, the protagonist’s tender vocal delivery at the very heart of the at-times cinematic aural expanses he’s immersed himself in. You just can’t help but come away wondering what he’s left unsaid. History dictates that before long there’ll be another project on the horizon, another chameleonic shift; before that happens though you do hope that we’ll get to know a little more about the man sailing the Porcelain Raft.