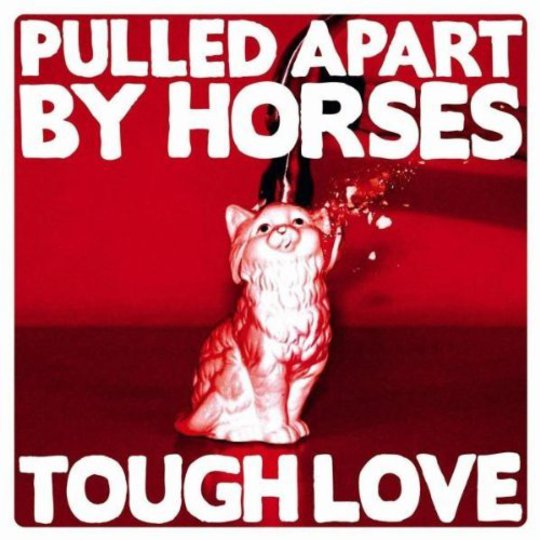 Leeds’s most unlikely daytime-radio-botherers are back for round two of their unruly assault on the world’s ear canals. Pulled Apart By Horses’ second album, Tough Love consists almost entirely of protein, sinew, denim, knackered Converses and unwashed body parts. I say ‘almost entirely’ because obviously, a cocktail of the above things alone would be a terrible thing. Highly unpalatable. In creating these unholy concoctions, what Pulled Apart By Horses also add is just a touch of their own cerebral matter; elevating their songs from moronic Wayne’s World fodder.

It’s a funny kind of clever though. PABH play raw and intellectually mawkish rock songs that, in a very short space of time (average song length seems to be about two and a half minutes) have a way of making themselves feel vital. They’re a step beyond being the goofballs of modern rock; it’s almost as if they have some kind of NLP shit going on in their songs. ‘Degeneration Game’. These boys are just playing dumb. Somehow, they even make sounding like Slade okay (on ‘Bromance Ain’t Dead’). It’s not. Not really (just to clarify). Not for anyone else. But if Pulled Apart By Horses want to sound like Slade, they’re not going to kiss your brainwashed arse and ask for permission.

The band have already spoken of their progress on Tough Love. The songs are certainly possessing of more dynamic than those on their debut album (which, in music industry years was only realised three and a half hours before this one). There is no light and shade, of course – more a case of dark and darker, fast and faster. But the new songs sound crisper, thought out for longer and imbued with all of the experience, cocksure swagger and nervous anxiety that a long while on the road has given them. The riffs are gutsy, the tracks are brief, the social commentary stark.

On ‘Wolf Hand’, when Tom Hudson claws the following lyrics from his oesophageal region – "when I was a kid, I was a dick / nothing changes / threw myself ‘round til I was sick" – you hear the guitars of Mudhoney in there, you think about ‘Touch Me I’m Sick,’ you think about Pulled Apart By Horses, you think about Mudhoney, you think about the hundreds of kids that will scream those words back at the band, in an overpriced moshpit somewhere in the Home Counties. Whilst throwing themselves around. And making themselves sick. Ad infinitum, ad nauseam. Literally.

Pulled Apart By Horses create songs with the desired effect of causing either whiplash, tinnitus, severe addiction or all of the above. And Tough Love is an addictive beast; 11 brutal songs that you could work your way through on the most meagre of lunch breaks – go back to your desk feeling like Clark Kent on a Ritalin overdose. Nobody asked them to reinvent the wheel - they’re just making the gnarliest wheel they can.