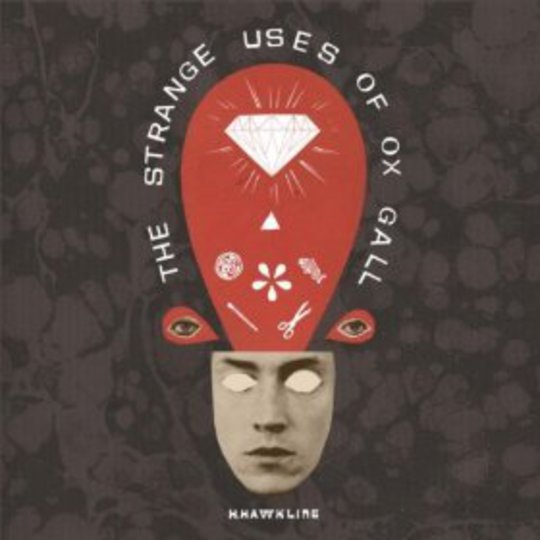 As much as this website’s reviews section is the preserve of precious fops who would balk at the vulgar indignity of their prose being thought of as a mere consumer guide, you can’t entirely divorce it from that idea either. For that reason, nearly everything reviewed on here is available for you to go and purchase with a minimum of hassle. Indeed, this is the case for The Strange Uses Of Ox Gall, the second album by H Hawkline, but only digitally: his label have pressed up a mere mythmaking 150 copies of the vinyl. You can still (as in, like, the day this review goes up) buy it from Spillers Records in Cardiff and Sadwrn, which is a distro/mailorder type place for Welsh language acts. So you should try and do that if you like vinyl, because it’s dead fit and my copy smells like new trainers for some reason; if not, download it for half the price here. Yeah, I don’t like hyperlinks either. Right! Let me tell you about H Hawkline and his album.

Essentially, H Hawkline is a vehicle for the songwriting ideas of Huw Evans, a Cardiff resident who can also be found playing guitar for Islet (who founded Shape Records) and Sweet Baboo. He can also be heard weekly on Welsh radio, speaking Welsh, but the nebulous idea behind the pseudonym is, I think, that it’s something for Evans to escape into. Starting as a solo guitar project along the lines of John Fahey, or one of his modern torchbearers like James Blackshaw, the instinct to write in the band format took over, and led to the more comprehensively sketched-out songs on his 2010 debut LP A Cup Of Salt (also limited to 150). The 12 songs on The Strange Uses… range from hermetic dustballs of musical detritus to somewhat triumphant scrums involving psychedelia, folk and glam rock. In the main, it sounds like it’s been written with a band in mind, which didn’t always apply to A Cup Of Salt, and also helps to explain why H Hawkline’s been getting talked about outside of self-celebratory Welsh indie circles.

That said, Evans and band are often found here digging for inspiration in these same circles, or at least their ancestry. Even before Cate Le Bon starts singing on ‘Ballast’, it has a nocturnal psych vibe acutely similar to her underrated Me Oh My album. The inclusive brainstorms that characterised Super Furry Animals and Gorky’s Zygotic Mynci circa 1995 or so, before people started suggesting to them that they might be capable of writing chart hits, are endemic in the boisterous ‘Funny Bones’ and the melancholy ‘Surf Pound’. In recognising this, it’s an invitation to dig deeper when searching for the essence of H Hawkline. Weirdo-indie acts from Wales who sang in the mother tongue, like Topper or David Wrench; further back still, the bands who did the near-impossible in the Seventies and accrued a following playing a Cymraeg version of psych (Brân, Tebot Piws – Evans had a hand in compiling the two Welsh Rare Beat albums which showcased those bands and others). Most of this album is in English, and it would be crass to reduce H Hawkline’s influences down to a shared language and geography – but it’s not a stretch to say this album sounds the way it does because of where it’s from.

As much as The Strange Uses… showcases a talent for earworm guitar pop, never more than the splendid ‘You Say You Love Me’, it’s sometimes as awkward as you might expect from a disc of which 150 copies exist. Nominally soothing songs such as the aforementioned are manipulated, as if the pressing is faulty (it isn’t); ‘Sea Of Sand’ is reverbed to heck and abetted by quasi-dub FX, like an ancient Lou Barlow solo cut or something. The transition on ‘Two Ghosts At Sea’ between confounding mandolin oddity and sturdy Krautrock jamming makes no real sense, but carries you along anyway. The interludes – ‘Big Red’, ‘Giât’ – are a bit like the sort of thing that appears on Guided By Voices albums in between the sparkling pop smashes. Come to think of it, they serve a fairly similar function on this album.

All of which necessarily means that The Strange Uses Of Ox Gall isn’t going to bring quick rewards. It’s wholly worth your ears, though: a lush ‘vinyl experience’, if you go for that kind of thing, and a warming example of how to rope in folk, indie and psych influences without making some hackneyed, watery gruel.