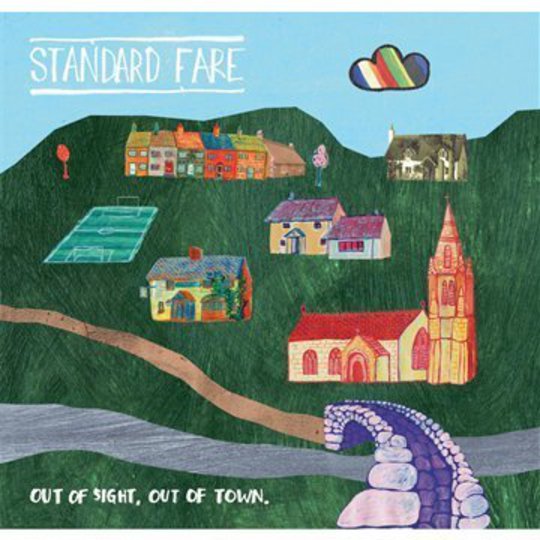 Everyone needs to grow up. Twee tearaways Los Campesinos! discovered this on the recent Hello Sadness, and Sheffield indie darlings Standard Fare have followed suit. Describing Out of Sight, Out of Town, bassist, vocalist and now PhD student Emma Cooper says: “We’re starting to see how we fit into the wider world and how we feel about this.” Coming far from awkwardly singing about 15-year-olds on debut The Noyelle Beat – where critics drew comparisons with their Cardiff-formed counterparts - Standard Fare have become a band who’ve found themselves, or at least one that’s heading in that direction.

With maturity, comes an air of pessimism. Thematically, Cooper speaks from experience, often looking back cynically at past foibles and questioning certain decisions. Gone is the air of youthful naivety, and replaced with uncondescending wisdom, you’d do no worse than listen. Delivered with an untreated crackle – flitting between Kate Jackson’s seductive pitch and the soft-spoken dulcet of Allo Darlin’s Elizabeth Morris – she has a wry dig at immaturity on ‘Darth Vader' (“You get too emotional / You’re lost in your own turmoil / You’re still not five years old”). On The Cribs-ish jangle of ‘Dead Future’ she combines with guitarist Danny How’s boyish delivery to question life’s monotony (“Why are we hanging around a little longer than I wanted to stay?”). She sternly lectures about a cougar fetish on ‘Older Women’ (“Why do you throw away your years like someone wanted your tooth? / There’s no money underneath the pillow upstairs / No fairy who cares”). Finally, such struggles are domesticated during ‘Half Sister,’ a nostalgic recollection of family disputes (“It must be 20 years since I last saw you now / throwing up cherryade in my father’s car”).

Out of Sight, Out of Town’s maturity doesn’t make it any less fun though. Alan Smyth’s production often makes the LP sound like a bedroom jam, all rickety melodies and low end sound, whilst the addition of violinist Brad San Martin (of One Happy Island) and violinist Emily Gunn (of Nat Johnson & the Figureheads) adds a noticeable thrash of rambunctious density. ‘Bad Temper’ loses itself in trademark Los Campesinos! unorganised vibrancy circa-We Are Beautiful, We Are Doomed. ‘051107’ lifts the modest trumpet melodies from a Get Cape. Wear Cape. Fly track. Finally, closing track ‘Crystal Palatial’ combines the bass line from Allo Darlin’s ‘Dreaming’ with a jamboree of barnyard violins. Yee haw!

On ‘Crystal Palatial’ Cooper enters a state of adoration: “We met again a month later / I got her flowers.” It’s a reminder, that while Los Campesinos! have greeted adulthood with a bitter and acidic after taste, Standard Fare have approached it with accepting subtlety. With so many LC! references, it’s easy to see Standard Fare as a poor man’s version. That’s for from the truth though. With Out of Sight, Out of Town, they’re moving further away from the comparisons and firmly into their own light.