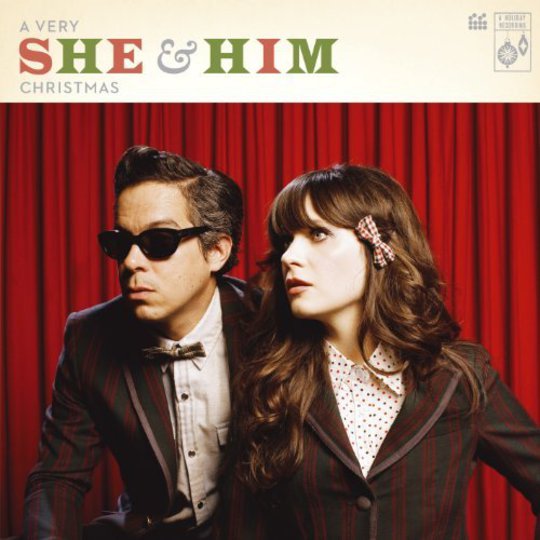 Believe me, I was thinking something very similar when A Very She & Him Christmas arrived in my inbox. Most towns haven’t even had an actor from Coronation Street turn on their Christmas lights yet, and here we have Hollywood’s default Manic Pixie Dream Girl and some sub-Will Oldham folk singer milking the ultimate cash cow that is December 25th.

But don’t be put off by this record’s premature release date, because as She & Him, Zooey Deschanel and M. Ward evoke in an instant the smell of brandy-soaked Christmas pudding, the taste of cranberry sauce and the sweltering comfort of a newly-knitted jumper. It would be enough to make you feel sick if it wasn’t so – and let’s be honest here folks – heartwarming.

A Very She & Him Christmas is guaranteed to exorcise your inner Scrooge, from the lilting "one-two-three, two-two-three" of ‘The Christmas Waltz’, to the delicate jangle of ‘I’ll Be Home For Christmas’, to the faraway lullaby loveliness of ‘Silver Bells’, to the rich, cooing harmonies of ‘Little Saint Nick’. It’s not something that’s easily achieved without resorting to festive clichés, especially when you’re playing songs which, in some cases, have been done to death since the Forties. But somehow She & Him turn your whole world into tinsel for the half hour you spend listening to this album, and they do it without overly relying on the annoying jingle of cheap bells, tastelessly dragging in St. Winifred’s School Choir, or hiring Noddy Holder to holler his festive catchphrase. On most tracks, She & Him sound just as seasonal with only the humble, homely strum of Ward’s guitar and Deschanel’s cocoa-warm vocals.

In fact, the whole aesthetic of A Very She & Him Christmas is remarkably old fashioned, with a timeless simplicity that will get you and your parents slow-dancing around the kitchen while basting the turkey and pouring ever more glasses of mulled wine. Of course there’s something inescapably naff about all of this, but then Christmas invariably is a bit naff – it doesn’t mean we can’t enjoy it. And so She & Him can even be forgiven for turning the corniest of all duets, ‘Baby It’s Cold Outside’, into a frivolously light-hearted holiday romance that’s been stripped of all the sassy vulgarity of say, Tom Jones and Cerys Matthew’s painful version. Only She & Him’s cover of ‘Rockin’ Around The Christmas Tree’ is a little difficult to stomach, due to Deschanel’s clunky Vic-Reeves-singing-in-the-club-style vocals.

A Very She & Him Christmas is unlikely to go down in history as a definitive Christmas album, but that’s partly because that particular corner of the music market has been completely and utterly saturated. Whether you’d like them to or not, by giving tasteful renditions of tacky songs, She & Him can make the blandest November afternoons feel like a super-twee party in Santa’s grotto. It isn’t highbrow or ground-breaking, but it is fun and uplifting. In short, it’s just like Christmas.