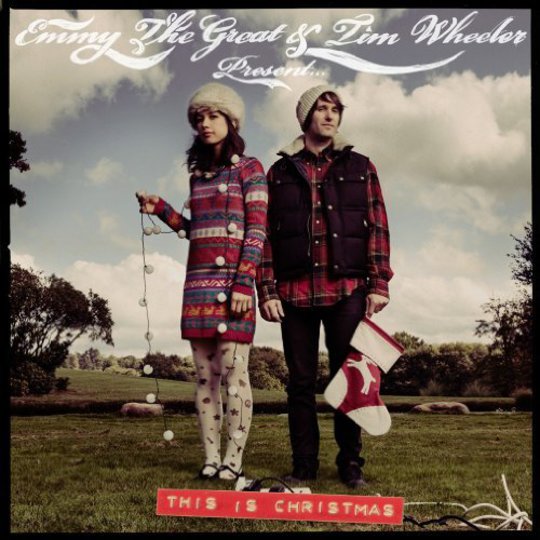 When it comes to Christmas songs and albums it’s more a case of who hasn’t as opposed to who has; offerings have and will continue to pour down the chimney with varying degrees of success from artists and groups both young and old, from the generally respected likes of Low’s Christmas via Elvis and Sufjan through to the collective detritus that makes up The Best 40 Christmas Anthems Ever, a collection one imagines contributes directly to the infamously high suicide and murder rates around this time of year. Somewhat terrifyingly Editors’ frontman Tom Smith and the former Razorlight drummer Andy Burrows also seem to be coming good with their threat of a Christmas album out later this month; if this fills you with anything like the level of panic that it does me, I will be hunkering down in a bomb shelter with some vodka and The Smiths back catalogue until the frost thaws if you’d like to join.

That said, Emmy the Great and Tim Wheeler’s offering has some refreshing and justifiable provenance, albeit whiffing slightly of artistic license; last December the Christmas gods conspired to leave them snowed in and missing flights. After exhausting the board games and whatever other activities new couples turn to, they did what any industrious musical pairing would do and started penning some Christmas tunes, a collection that grew over the coming months to form this particular collection.

A short introductory instrumental kicks things off innocuously enough before a segue into the sounds of a form of Christmas commonly found in shopping malls and bad seasonal TV; sleigh bells chime and infectious drum parts force your head to nod as it fills with stomach churningly saccharine lyrics. It is in fact 'Marshmallow World', the only cover on the album and a song most commonly associated with Phil Spector and Darlene Love. Spector’s version manages to pull off what is ultimately an offensively twee song as a result of natural instrumentation and a gutsy and imperfect vocal; it dilutes the molasses. In contrast, the opening track proper to This is Christmas with its clean guitar sounds and glossy production sounds like it could be soundtracking an ad for Comet as young lovers jovially peruse reduced price 32” TVs. The combination of Emmy and Tim’s vocals is also a consistent issue throughout the record; partly a result of a seeming refusal to harmonise, but mainly because are both blessed with mellifluous tones that, whilst effective on their own, offer little variation or texture together.

It’s not all bad though; ‘Christmas Day (I Wish I Was Surfing)’ with its frenetic strumming, power chords and instantly hummable chorus recalls early Ash, while ‘Home for the Holidays’ shows what’s possible if the mix that’s on offer gels; while still liable to give your dentist nightmares it is a credible Christmas pop song with a beguilingly catchy melody and evocative lyric that captures the feelings of past relationships, missed possibilities, The Christmas Spirit and passing time remarkably eloquently. A light-hearted touch is seen elsewhere when the festive season is analysed from Mrs Claus’ perspective ‘(Don’t Call Me) Mrs Christmas’, while songs that feature predominantly one vocalist (usually Emmy) such as ‘Christmas Moon’ prosper as a result.

Ultimately it’s difficult not to feel a little Scrooge-like when dismissing a Christmas album, particularly one made by a likeable pair of talented musicians clearly out to have fun over and above creating something that will last through the ages. In the right place I’m sure it would go down well; I’m man enough to admit that I’d probably have a very different take on This is Christmas if reviewing it off the back of the scheduled Bush Hall gig, dosed up on bonhomie and a few pints of eggnog. But I’m not; instead I notice that the album closer featuring Emmy and Tim singing the exact same melody against a simply strummed acoustic guitar doesn’t even sound as good as those talented mates so many people seem to have; the ones that tend to pop up and effortlessly rattle off a tune the morning after the night before. Sadly, if Santa wants to get hold of a copy of this Christmas offering he may find himself rooting around in the bargain bins. Bah humbug.