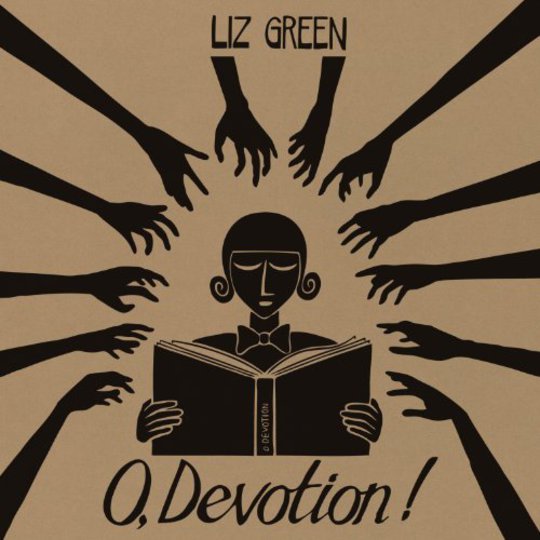 The best way of describing Liz Green’s debut record is to imagine excusing yourself from a few Friday night drinks in town with friends, blindly groping your way to the toilet and then somehow taking a wrong turn in place and time - ending up in an eighteenth century tavern and quickly trying to reconcile your clothes, mannerisms and knowledge with a world that appears alien to you, but perfectly comfortable to them. And at the same time, managing to rather enjoy the beautiful, complicated insanity of the situation.

This album has been over four years in the chrysalis since Green first garnered attention as Glastonbury’s Emerging Talent winner back in 2007. Springing from the yellowing pages of history with authenticity and bluntness, O, Devotion! is welcomingly mature and broad in scope despite its minimalist approach. See, folk was never meant to be meandering and flaccid. It was bawdy. It was lewd. Bits were cut off and bits were hidden in interesting places. No-one gave a shit what their hair looked like. And whilst Liz Green isn’t the sort of singer to go around shrieking for no conceivable cause, there is something in her laidback, matter-of-fact tone and ability to subtly blend orchestration into her songs that conveys a profound gravitas, helping to guide you along her labyrinth of tales like a sturdy and roughly hewn rope of multicoloured fibres.

That certainly isn’t to say that Green doesn’t possess beauty in her voice – she does (just listen to the breathtaking vocals on ‘Gallows’ for proof of what she can charm from her tongue). But in oscillating between sweet and sour, she manages to cleverly magnify the potency of both. In many ways, what makes O, Devotion! so captivating is how simple and sparsely decorated it is: in lacking hysterical gushes, the colours can spread more evenly around the borders of the record. Her voice is a touch of Sandy Denny’s bittersweet lamentation with a gritty soul and pathos more in common with Billie Holliday and Nina Simone, all topped off with a street-smart snarl and disdain that is unmistakably home-hewn. Combined with this is a delectable Waits-esque carnival of instruments and ideas that tiptoe softly through her songs to elicit brightness into the dark and continually lift the songs onto another ledge. Opener ‘Hey Joe’ is all echoing brass fading in and out of the foreground while Green half sings, half yelps the melody. ‘Midnight Blues’ hangs on a rolling, percussive double bass part while ‘Displacement Song’ attempts to keep upright on rolling barrels of brass. Thematically, the gorgeous ‘French Singer’ could be from the Twenties but the curl of irony and post-modern introspection drag the record into the modern era (this seamless blend of the old and the new is crucial in making the album so effective). Equally, you are never once allowed to sink into simple acceptance: the gentle ‘Rag and Bone’ suddenly and gleefully rises up into a New Orleans jazz outro and ‘The Quiet’ continually dodges around to avoid being pigeonholed – this is a record full of unexpected yet subtle twists. And the aforementioned closing ‘Gallows’ - the most traditional track on the record - manages to position itself beautifully between chilly matter-of-factness and emotive pining as the trapdoor swings open to bring the record to a solemn and poignant close.

Musically, the record is beautifully and expertly captured onto tape, Green and producer Liam Watson possessing a touch of rare intelligence and deftness in their ability to vary the pace and instrumentation of the record so that it continually sustains the interest without resorting to predictable and clichéd changes in dynamics and pace. Like the best traditions of folk music, it simply relies on the voice and the story to maintain the interest. No cheap tricks and no frills; just substance. And more importantly, a surfeit of simple yet beautifully crafted songs

Aside from the music itself, what makes O, Devotion! so sumptuously pleasurable to listen to is that it presents as the genuine voice and vision of the artist, rather than the diluted cordial so frequently splashed across the airwaves with the label of 'folk' awkwardly trimmed to fit. It is a record that gathers roots from across the centuries but stands confidently within its own era, both oddly aloof and cockily perched at the same time. A strikingly unique and bold approach to songcraft is presented here and you can only hope that enough of a commercial and critical swell builds behind Liz Green to allow her to continue making music of this rare, strange and wonderful vintage. There is an extraordinary talent present here that deserves time and space to blossom to its fullest and truest extent.