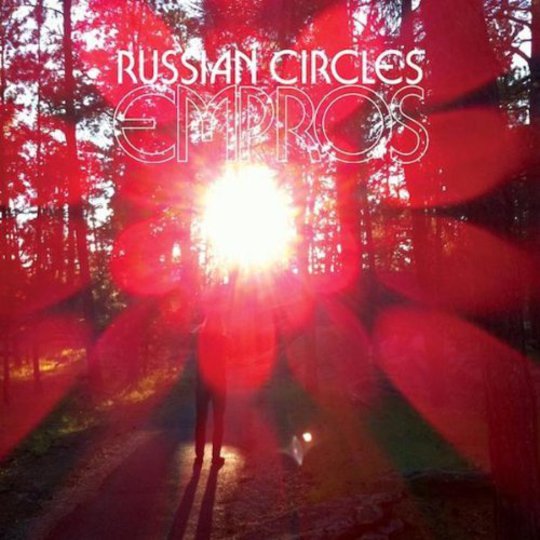 They seem to have a passion for Europe, these Russian Circles. Their last album, 2009’s Geneva, while undeniably accomplished, was named after only the second-most-populous city in Switzerland, while latest effort Empros is seemingly named after a Greek news site.

What we can learn from this (aside from never to use Google to help write the opening paragraph of a review) is that the band have a wider-ranging gaze than that of many of their Stateside contemporaries. Where other, more lethargic, instrumental acts would be content to lean upon one riff for the duration of a song, Russian Circles have proved themselves to possess a rhythmic intensity which empowers riffs with an ever-evolving nature, resulting in compositions which are as unique as they are powerful.

With Geneva as the summit of the Chicago three-piece’s ascent to post-metal beautification, Empros is given the difficult task of answering the question 'where do we go from here?' The answer is to deliver more of the same crushing, and often startling, musicianship but this time with a more streamlined and, dare I say it, refined approach. It’s a consistently gradual progression which defines Empros; contrasts in tone and texture are always smooth and never abrasive, despite their often overtly aggressive nature. Indeed, Russian Circles have become masters of the art of the chameleon-riff, one that shifts to match its surroundings but without ever losing its own sense of individuality and purpose.

Opening with the Mastodon-sized riffery of ‘309’, Russian Circles eventually transform the track into an elegy, conjuring images of barren, devastated wastelands, cinematic in their savagery. What is clear is that Geneva’s elaborate string sections are no longer needed; for all the finger-tapping and guitar acrobatics, this is a more refined Russian Circles, unafraid of sitting back and letting a melodic phrase mature before pushing another fragment to the forefront.

The band’s compositional maturity reaches new heights on tracks like ‘Mládek’ and ‘Atackla’, where both optimism and terror are equally represented through waves of jittery bass, volatile guitar and cathartic drums. Sure, I may have gone overboard with the adjectives but when instrumental music is this attention-grabbing and so far removed from the traditional post-rock movie-score tradition, it’s these evocative mental images which spring to mind rather than a desire for video-screen accompaniment.

In part, this is down to the, quite frankly, massive production at the hands of Brandon Curtis who, like the band themselves, appears to have grown in his position as producer; Empros sounds positively colossal, whether punishing or mentally caressing its audience, ensuring that every one of its six tracks reaches its full potential.

That said, if Empros were to contain one mis-step, it would lie in its ending. Seemingly an ode to what has gone before it in the tracklisting, ‘Praise Be Man’ features an ethereal Brian Cook singing what we can only assume to be, well, praises on top of a distorto-ballad. While it’s a haunting enough sideline, it’s just that, a sideline, and can feel tacked-on at the album’s close, particularly when the former five tracks flow so well into and with one another.

Still, it’s a minor complaint on an album which gives the instrumental rock/post-rock/call-it-what-you-will genre a thorough kick up its collective behind. Empros is consistently epic and life-affirming without ever delving into over-emotional cliché; this is still ten-tonne heavy riffing but it’s riffing that also weighs heavy on the heart. They may have now reached the rank of instrumental emperors but, should Russian Circles’ upward career trajectory continue, world domination won’t be too far down the line.