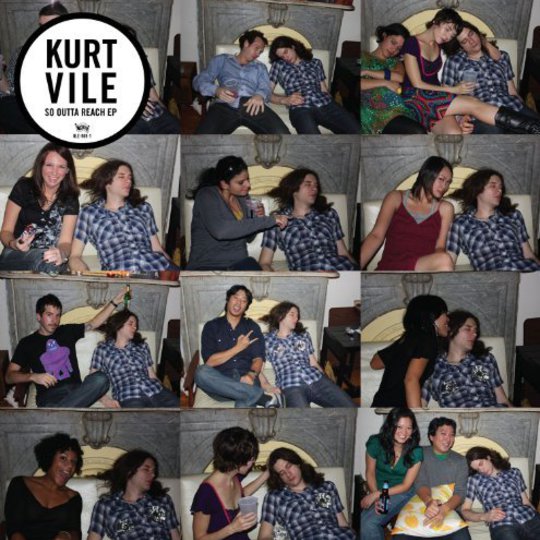 We all have that friend, who probably doesn’t wash as often as is necessary, and somehow makes the trip round the house party, lapping up the shallow contents of all those discarded cans and bottles without a hint of embarrassment. Some people denounce this manoeuvre because it seems desperate or needy or perhaps uncool. My main gripe with it, though, is, well: is there any point? I myself have always been sceptical as to how much of the good stuff is actually left in those not-so-alluring cans of cheap cider, tending to lean towards the idea that there’s probably just a good inch of backwash at the bottom that’s been brewing all evening - just waiting to pass on all kinds of malicious bacteria.

It was with similar scepticism that I approached Kurt Vile’s follow-up to his hazy, lazy, introspective January release, Smoke Ring For My Halo - So Outta Reach being one of those ‘these songs didn’t get into the LP and we don’t know what to do with them now’ EPs. Because, let’s be honest, no matter how good the drink that previously inhabited the bottle was, backwash is backwash.

In fact, on listening to the first three tracks (the second of which is a rather scrumptious Springsteen cover), you’d probably be forgiven for losing control of your oddly reactive music-geek bladder. Opener ‘The Creature’ sees Vile at his pensive, empathic best, languishing in melancholy self-exploration. He then owns Springsteen’s ‘Downbound Train’ with some mighty filthy guitar and his characteristically seductive drawl and ‘It’s Alright’ arrives third, a delicious sonic solace that revels in its stoner pseudo-philosophy, with its the opening lyric: “It‘s alright to hang your coat here” epitomising that oh-so-Vile naïve optimism we all love.

Before you kids start getting too excited, though, this start is not representative of the EP as a whole - your favourite overpriced ‘Jack Wills’ boxers will be uncomfortably dry by the end of these six tracks. The issue is just that, well, the later tracks aren’t as crammed with incisively perceptive lyricism, or brain-invading melody as his previous offerings. ‘Life’s a Beach’ and ‘(so outta reach)’ do, rather sadly, fall flat - bridging the odd gap between the introspective and the feel-good and failing to pull off either with much success. The melodies land on the wrong side of the scratchy/catchy divide and the lyrics (“I wanna go to a mall/ ‘cos life’s a beach” ?!?!) seems clumsy in their over-eagerness to be ‘happy’. That’s not to say the second half is all bad - ‘Laughing Stock’ takes a step back from Vile’s Smoke Ring character studies, and still manages to grasp an unusually subtle poignancy.

Now obviously, we shouldn’t be expecting Vile to regurgitate the formula (not that the album was remotely formulaic) that made Smoke Ring For My Halo such a success, but it’s the songs most similar to that style which he pens so competently. The latter, less Smoke Ringy tracks are a worthwhile stepping stone for him, but Kurt just doesn’t quite pull them off with that catchy, carefree artistry we all know he’s capable of.