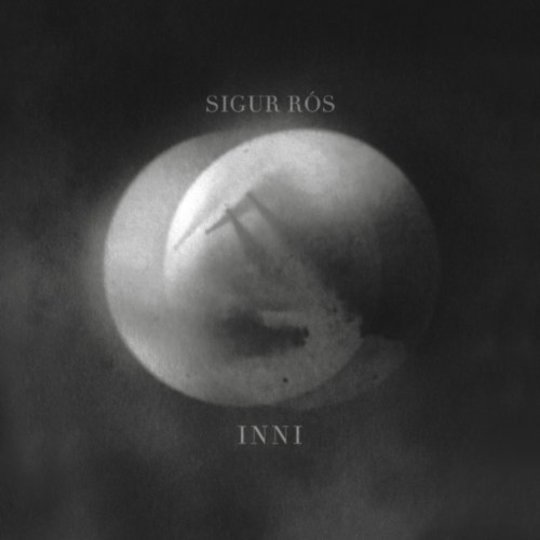 How do you describe the music of Sigur Rós? More importantly, how do you describe it without using the oft-overused word ‘haunting’? This is a quandary I came up against when listening to Inni and watching the accompanying DVD. Inni is the post rock experimental Icelandic foursome’s second live film and album, taken from their 2008 London gigs at Alexandra Palace. It might seem pointless to note that the gigs were in November, but their music sounds like winter drawing near, so perhaps it does warrant a mention.

Many live albums want to big up the applause and adoration the subjects receive from their fans. Not so on Inni; the applause is turned down, the focus is on the music. Whilst Sigur Rós all look a bit like glittery feral creatures when performing onstage in the DVD (hard to tell how much of this is because of the way it is shot), they are hardly a band one would describe as showy. But the music itself is epic, and not in that wanky overblown stadium rock way - epic in the way of glockenspiels and falsettos and cello bow scraping against guitar strings and pounding drums and explosions of piano chords.

‘Svefn-g-engler’ begins the purely audio portion of Inni. With the rumbling and resonating of the organ combined with the grinding of bow against guitar, there comes a sense of taking off and leaving, which is perhaps what a Sigur Rós live show is about. Not like at an Oasis or Manic Street Preachers gig where the focus is all hands in the air sing-alongs and feeling connected with your fellow man, the Sigur Rós live experience is more of an introverted one. Not about connecting with anyone else, but about experiencing the band and leaving your surroundings behind.

Jónsi Birgisson’s vocals have something of the choir boy about them, only infinitely darker, stronger and more intense than the Aled Joneses of this world. It is heartening to hear him smile mischievously at the camera and announce, ‘we make music for the devil’ during a snippet of an interview in the film.

Some songs seem to come directly from the throat, notably ‘Hoppípolla’ where Jónsi’s vocals are deeper and you can hear a kind of raging energy in his voice, though it’s always controlled. ‘E-Bow’ sticks to the high-pitched falsetto, retaining a demonic choir-boy feel, Orri Páll Dýrason’s drumming bringing this home, sounding like the ritualistic hallowing in of some sinister ceremony.

There is a fantastical element to Inni. The glistening cinematography of the film creates an atmosphere of ethereal claustrophobia – it’s not exactly like being at a Sigur Rós concert because it’s in black and white and being watched on screen, but director Vincent Morris has created a different kind of closeness and intimacy which is nonetheless massively affecting. There’s a point where Jónsi joins Kjartan Sveinsson to play keyboard for ‘Inní mér syngur vitleysingur’ when his face lights up in a joyous grin and as they pound the keys together you get the sense of an engine coming into life and of a victory march.

So back to explaining how Sigur Rós sound: like claustrophobia, like darkness, like winter, like frost, like fireworks, like explosions. They are not in the way of overblown stadium rock, but the film shows the gigs ending in an explosion of glitter and confetti and you can’t imagine it any other way.