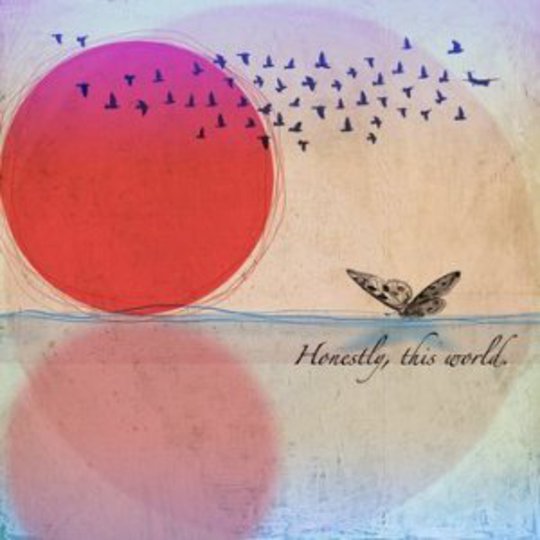 The Moth & The Mirror occupy one of those grey areas in music. Several of the band’s members might already be known to the most devoted disciples of Scottish indie rock, but this is by no means a supergroup. Louis Abbott from Admiral Fallow is the only previously established frontman in this band, which seems to feature the least prominent members of some of Scotland’s most significant acts.

So while the temptation might be to label The Moth & The Mirror as an Admiral Fallow/Arab Strap/Frightened Rabbit supergroup, let’s be clear: on Honestly, This World, you won’t be hearing the dour, dulcet tones of Aidan Moffat or the gaspingly tender earnestness of Scott Hutchinson. Rather, you’ll hear Arab Strap’s former cellist, Stacey Sievewright, step into the limelight as a strong, smart frontwoman, while the glowing guitar-work of Gordon Skene reminds Frightened Rabbit fans of the energy he has been adding to that band’s live shows since 2009.

As supergroups go then, The Moth & The Mirror lack the hipster credentials of a collective like Broken Social Scene, the cult acclaim of a band like The Bad Seeds and the all-round superstardom of a proper supergroup like The Travelling Wilburys. Fortunately, on the evidence of Honestly, This World, The Moth & The Mirror have spent enough time with some of Scotland’s best songwriters to have learnt a thing or two about making a great record.

Opening track ‘Everyone I Know’ is a stunning journey through the band's musical breadth. Its delicately glum acoustic guitar is powerfully illuminated by a deeply rhythmic bass, making an-almost infectious groove. But soon every echo of danceability is bludgeoned out, first by atmospheric high-pitched drones, then by Sievewright’s painfully resigned plea of “I just don’t want to see you like this”, before finally, a searing riff ignites and angrily burns right through the affectionate vocals.

Folkish understatement and angst-ridden post-punk are two things that The Moth & The Mirror do very well, and the distinction between the two is most clearly put on ‘Boxes’. Its first three minutes feel like a lullaby that wraps you up in a radiator-warm blanket, before ripping it away with clawing, scratchy guitars. These contrasts are at the heart of what makes Honestly, This World immediately likeable, and they often come in odd combinations. The title-track, for example, has a sombre soulfulness to it, which becomes completely drowned out by angular post-rock, swelling choral parts and a strangely funky indie-disco section that sounds like Franz Ferdinand having a crack at writing a club banger.

The Moth & The Mirror are at their weakest when they lack authenticity, as on the shuffling guitar-pop of ‘Germany’, which far sounds too much like it was written by fashionable middle-class pretty boys from the South East of England to be played by anyone connected with a band like Arab Strap. These disappointments are rare though – the noisiest moments of Honestly, This World scream with emotional integrity, while the hushed acoustic numbers are rich in sincerity and sweetness.

Stacey Sievewright’s performance is particularly brilliant. As the band evoke the downbeat beauty of Low on ‘Soft Insides’, her vocals yearn, warmly, sensitively, and completely captivatingly. Later, on the implausibly lovely ‘Closing Doors’, she sounds snug, safe but just a tiny bit sad as she whispers “I pull my socks on under covers to keep warm / And I’m dreading filling in any more forms”.

Honestly, This World is a phenomenally fluent debut, as the skill and experience of its performers ensure that its meanings, moods and emotions are articulated loudly and clearly. The songwriting can be a little loose and undefined (‘Fire’ is the only bona fide straight-to-the-point pop song), but the ebb and flow of this record's ambition and scope is nothing to be ashamed of. The Moth & The Mirror have plenty of wonderful ideas in them, and are more than capable of bringing them brilliantly to life. Really, they deserve to be stars in their own right.