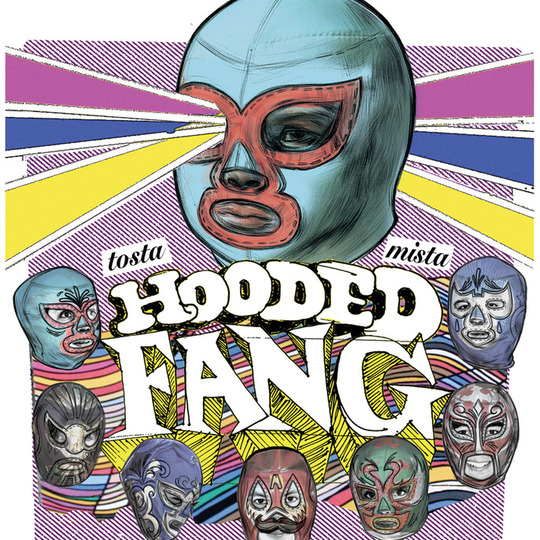 Albums, like lovers, come in all shapes and sizes, and we fall for them for all sorts of different reasons. Maybe your favourite record came along and nursed you at a tricky time in your life; maybe it makes you feel like you’ve never felt before; or maybe it’s guaranteed to piss of your parents, and that’s reason enough to keep it around. The point is this: just as appearances shouldn’t matter when you’re falling in love with a person, trivial aesthetic points like length shouldn’t stop you falling in love with an album.

But you can’t help but be a little disappointed when you put on your copy of Tosta Mista, the second album by lo-fi Canadian indie-rock sextet Hooded Fang, and realise it’s only 23 minutes long. Obviously, not every album has to be Mellon Collie and the Infinite(ly long) Sadness to be enjoyable, but you know – just 23 minutes? Really? And three of the ten tracks are just interludes of the same freaky sample of jazz-café blues? Really?

Okay, so that leaves us with seven actual songs to play with, and they can be broadly divided up into two categories. First, there are the so-slapdash-I-really-hope-it’s-intentional rock and roll numbers, which have got bits of psychobilly riffs tossed over the top and throw-away lyrics about nothing more than having a good time. Then there are the surf-pop shakedowns, soaked in Sixties girl group grooves and crude staccato guitars.

Out of the real rock songs, ‘Clap’ is the obvious highlight. It doesn’t burst, but rather stumbles into life, as the old three chord trick gets played on a guitar that’s never been near a tuner. It has all the excitement of having been recorded in a rush, and while it’s the sort of song that could have been played by any band of the last 50 years, that’s exactly what makes it so immediately likeable. But it’s not a formula for repeated success, as ‘Jubb’ proves, sounding as it does like a bad cover of a Pains Of Being Pure At Heart B-side.

As for Tosta Mista’s Sixties swingers, the title track sounds a little like something from an Austin Powers soundtrack, but there’s a hell of a lot of fun to be had with its mashed potato funk and psychedelic jams. All that’s missing is a young Tony Blackburn introducing it on Top Of The Pops. At the other end of the spectrum, ‘Vacationation’ sounds like a naff Monkees pastiche by Benny Hill, or Wavves without the drug-addled attitude.

The only track that doesn’t quite belong in either camp is the penultimate ‘Den Of Love’, which sounds far too much like Mud’s ‘Lonely This Christmas’ to either be taken seriously as a sorrowful break-up ballad or an authentic Summer of Love slow dance.

And just like that, your 23 minutes with Hooded Fang are up, and your final impression of Tosta Mista probably matches your preconception of such a brief album, in that it’s clear that Hooded Fang aren’t exactly overwhelmed with ideas. Don’t get me wrong – listening to Tosta Mista won’t be the worst 23 minutes of your life, but that’s not to say the time can’t be better spent.

Of course, two-and-a-half minute pop songs do have their place – the enduring popularity of The Beatles’ early material tells us that. But even The Fab Four managed to pad their first few albums out to at least half an hour each, and the guitar-pop barometer is still being set ever-higher today by the likes of Dum Dum Girls and Wavves. So while Hooded Fang’s two-and-a-half minute pop songs are absolutely fine, you’ll struggle to find the time for them when there are already so many better ones out there.