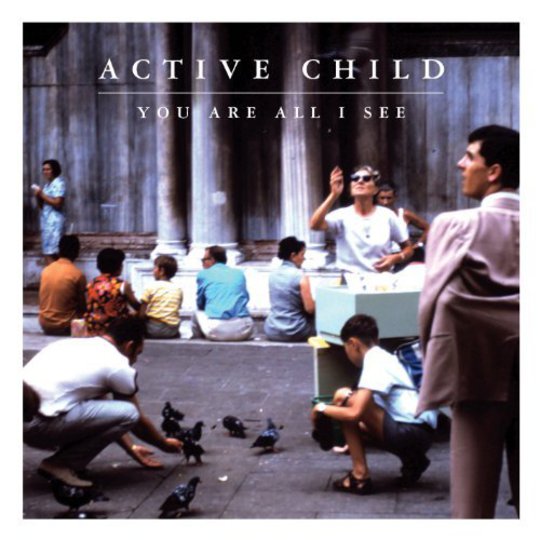 Listening to Pat Grossi - aka Active Child - do his thing, I'm reminded of A Clockwork Orange and Alex's glee when hammering a bit of the old “Ludwig Van”: “Oh, it was gorgeousness and gorgeousity made flesh” the droogy bastard frothed “It was like a bird of rarest-spun heaven metal or like silvery wine flowing in a spaceship, gravity all nonsense now.” Consult any accredited dictionary for the definition of 'sumptuous' and there sits Grossi's pouting mug, the youngster looking all mopey and intense, or maybe a bit otherworldly, or maybe a little smug for having produced one of the most enveloping, most downright gorgeous records of the year. Real horrorshow, like.

Of course, when it comes to lovely loveliness, he has plenty of competition within the genre christened 'forlorn-a-tronica'; what you might define as a liturgical, often string-laden form of electronica, with r'n'b/rave tropes. For instance, the respectively brilliant Chad Valley and garage-a-delic wiz Jacques Greene, or Grossi's kindred spirits Vision Of Trees and How to Dress Well - who plough a similar furrow of ecclesiastical synthetics with the same dichotomy at its heart – the play-off is between divinity and 'urban' music's profane undertones, which if nothing else exemplifies Massive Attack's continued influence on music. Perhaps the legacy of Grossi's past as a choirboy surrounded by his Dad's rap chums, the artist known as Active Child has the edge on his peers operating in the same loose genre.

Made up of a collection of moments, each one possessed of the purity and sparkle of expensive diamonds, You Are All I See may be slight and one-note, but its one idea is executed to perfection: the idea of perfection itself. Be it the perfect female form or the perfect sunrise, the perfect kiss on the perfect jaw line, or even (as on 'Johnny Belinda') the perfect sinfulness of infidelity. Or when combined - the perfect woman, desired as she sleeps through the perfect sunrise, as concerns 'See Thru Eyes'. Wherein with his cherubic voice in full song, Grossi harks “Her body glistened in the morning light”, the seriously amorous synth notes moving across the ear like lens glare. You Are All I See is all about the shimmer, as if rather than playing with cutting edge tech Grossi's touch is so deft, and the sound so seemingly in tune with the natural world, he somehow is able to play with light.

But perfection can be boring without a measure of imperfection, to offset the potentially cloying, almost sinister niceness of it all. Which is where the dirty-rap elements come in. Hip-hop backbeats, 808 handclaps, cascading toms, chintzy coke-rap synths, or the whole kit and caboodle as on autotuned jam 'Playing House', the flourishes grant the music edge and a modish counterpoint to the harp-graced floweriness forming Grossi's ballads. And when the layering is lush and executed properly, and when the binary components – the hymnal and the squalid - lock together in perfect unison, the effect is transcendental; like a heavenly mirror-image of Salem's drag hell. Case in point - 'Johnny Belinda', which picks up where Timba/Timberlake's 'Cry Me A River' left off. Only Grossi tells the story from the cheater's point of view (casting himself in the role), before painting the dog's tragically belated contrition as a cloud-flying religious experience. Unforgettable stuff.

Other highlights include... well take your pick. Flooding the template he hatched on last year's Curtis Lane EP with mountains of pop hooks, Grossi keeps it dazzling for the duration. 'Hanging On' plays like Baby Face producing for Lefteye's tormented spectre, while the trembling title track is splendour incarnate - closer in spirit to the thug-gospel stylings of Nas and Tupac than Fleet Foxes (albeit fronted by a spayed Andy Bell). Meanwhile, the polarised 'Ancient Eyes' juxtaposes the album's deepest synthline against its most elevating harp piece, making for a sublime mix of dread and a sense of God-bestowed wellbeing. At times the record isn't just inspired, it's what inspiration itself might sound like.

A love song for the ages, while 'See Thru Eyes' is a voluptuously mighty thing it is also painfully fragile. And although it can only have the intended effect ensconced in the track's majesty, there's one particular line just too flipping poignant not to flag up. With Grossi glowing under a sonic shower of fluorescent shrapnel, from behind the hot rain he proclaims: “I'll know your secrets tonight” before the song makes a kind of falling/exploding motion. Of course it's only his memory playing tricks on him, but as a tender tribute to a once cherished lover, it's as erotic as it is romantic as it is timeless.

In case you were in any doubt, woman are nothing less than gods on You Are All I See, Take 'High Priestess', where bowed and humble Grossi pays homage to a sapphic deity. A weeping Jeremiah prayer as is James Blake's stock-in-trade, while slightly contrived in isolation it seems natural in the context of the album's prevailing themes. It's again Blake who provides inspiration for the album's weakest track. With its machine-masticated vocals and wilting synwaves, the insipid 'Way Too Fast' sees a drop in standard from the magical to the merely likeable. That is if you like the idea of Florence + The Machine drooling Brit School goop on The-Dream. Each to their own. Other minor missteps include trite instrumental 'Ivy' and misfire 'Playing House', where Grossi's Dirty South fetish gets the better of him.

But if the vision has its tiny flaws, You Are All I Seeat least strides for a type of perfection - the likes of which in real life doesn't exist. In music however, as Grossi is at pains to acknowledge here, fairytales are fair game. With the Californian intent on appealing to the active child in all of us, as was always the case where we were kids, the stuff of make-believe inspires a sense of wonder. “I knew such lovely pictures” as Alex would say.