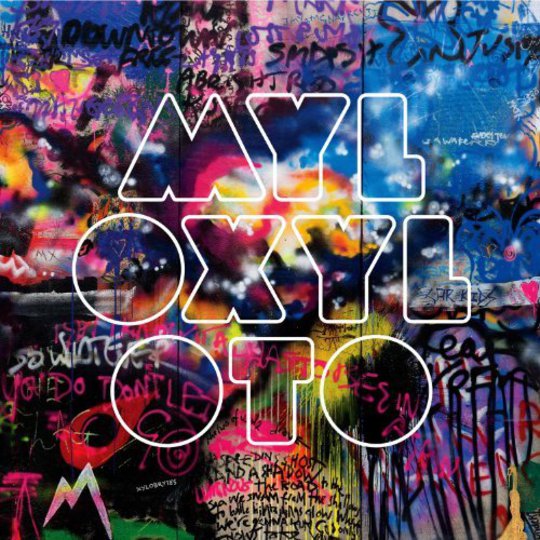 Hello bombastic nonsense! We are old friends, you and I. When I am at Glastonbury and in need of some crowd-sourced euphoria on the Saturday night, or in my car and want to do some indiscriminate caterwauling, I can seek you out and you will be my non-judgemental partner in crime. Whether we want to admit it or not, there is a time and a place for the likes of Coldplay. Ironically, now that people are finally accepting it's okay to like them, Mylo Xyloto does not herald one of those times.

It certainly has some mighty catchy songs. Opener 'Hurts Like Heaven' is all Eighties pop shimmer. 'Every Teardrop Is A Waterfall' is a straight-up earworm, as daft and silly and fun as any of its compadres in this summer's charts. 'Paradise', meanwhile, manages to turn the cliched Coldplay drone into something euphoric and sparkly. It really is possible for their sound to be updated, to meet the challenges of grabbing the attention of a pop-loving 2011 audience while still appealing to my fellow Parachutes and A Rush Of Blood To The Head fans. Some more songs in this vein would be welcome.

'Princess of China', aka. The One With Rihanna On It, is a legitimately great song: all synths and thuds and "ooooooh-woaaaaaah!" hooks. With Rihanna's sex-kitten attitude knocking up against Martin's ponderous croonings, it's almost a bit sexy. It's easily the best track here and an undoubted future single... which in itself is a key to why this album isn't quite the success it wants to be.

In the three years since Viva La Vida, the particular playing field Coldplay occupy has changed significantly. Whereas once the effort would have gone on making a great overall album and the singles would have been almost incidental, on Mylo Xyloto there is a distinct feeling of effort having gone into making big singles, rather than a great album. It's not an unwelcome change of tack, but it means that the inclusion of some of the album's more stripped-back songs, like 'Us Against The World' or 'UFO', just don't really make sense. Considering this is the same man who wrote Viva La Vida, a legitimately good indie-pop album, it's just bizarre that Martin apparently felt the way to go was to polarise the band's sound completely, splitting it into either mega-pop wallops or the most sparse of stripped-back acoustics.

Mylo Xyloto has been described as a concept album about romance in dystopia. But truthfully that doesn't really come across, seeming more like a gabbled attempt to give the songs on here a vague sense of garbled cohesion.In fact, in part because the singles are so strong, it's often difficult to listen to it as an album and glean the concept the band hope will unify the songs. It's popcorn music, and there's absolutely nothing wrong with that. But trying to dress it up in big concepts only belies the belief that it's somehow lacking, which leads to its undoing.

Mylo Xyloto has 'should like' written all over its graffitied face. It ticks all the appropriate boxes: electropoppiness, just enough credibility to get a pass, and anthemics (although not as many as you'd expect). It's not, on the whole, dislikable; it's just a bit of a mess. There is a big difference between knowing your place and knowing yourself. Knowing yourself means you can define your own place; Coldplay seem to have become so obsessed with their place in music that they've forgotten who they are as a band. All the mega-Coldplay fans, and we should acknowledge that they are many in number, are not going to give a fig what I think about it - and nor should they. I just think it's a shame that their long-fought loyalty is being met with this, when truthfully they deserve better.