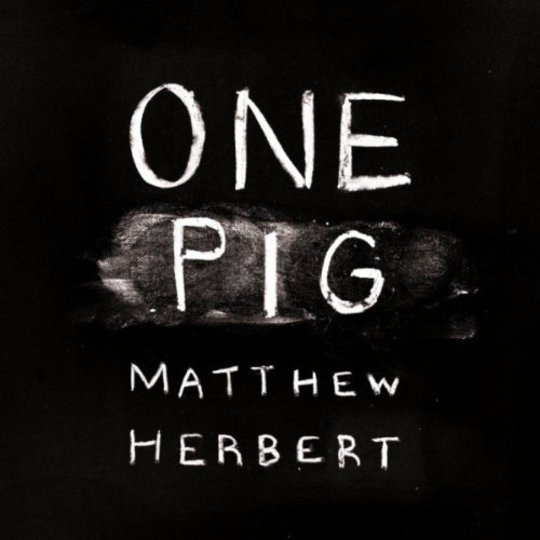 One Pig; it really is an album made out of a pig. Electronica musician Matthew Herbert built the record on samples of the plight of a chosen pig on its journey from birth to death to lunch and beyond. The album makes up the final volume in a conceptual trilogy of albums by Herbert, following on from One One, a record on which Herbert is the sole musician and One Club, a record built upon sounds from a German nightclub. Herbert has sampled everything under the sun via one pseudonym or another, from 3,500 people simultaneously biting into an apple to someone vomiting outside an arms fair. He is a lover of the visceral, using ‘found sounds’ to create politically aware and often surprisingly soft sounding dance and electronic music. In the case of One Pig it would be hard to describe the record as dance and you won’t be hearing it in a club anytime soon, unless it’s a one-off art event somewhere achingly trendy. It is, however, a fascinating project and almost infinitely more listenable than the concept suggests.

Each track title on One Pig is a chronological date, beginning in ‘August 2009’ which starts with silence making way to rustles in the pig pen as the animal comes into being. As the record continues the soundtrack to the pig’s plight is often tense and atmospheric but occasionally oddly relaxing and beautiful. In ‘October’, for example, sampled pig grunts make way to hazy musical crescendos. ‘November’ begins with a regular recording of the clanging of a metal farmyard gate and the squealing of the pig, then looped over to become an anxious, ominous track that wouldn’t be out of place in a horror movie. It feels like a monstrous premonition of what’s to come.

Herbert was frustrated that he wasn’t allowed to sample or witness the actual slaughter of the pig, so there is no recording of that. The entire album has already angered some animal rights activists, and whilst I can respect the disgust some vegans and vegetarians may have with the concept, Herbert has made the important point that if you do eat meat you should be aware of the process that has led to the meat getting on your plate, many of us being disconnected from this. This obviously is no straight-forward documentary showing the life and death of the pig: it’s being turned into electronica. But from the record you do garner a sense of the animal’s journey.

Following death, the pig’s ‘progress’ is still being recorded. The sound of the pig’s body being sawn up and the dripping of its blood form the basis of the melody in ‘February’. Instruments used on the posthumous pig tracks are made from the animal’s body, including a pigskin drum and an instrument which is played using blood. In ‘August 2010’ blood noises are absorbed into what resembles a deep, slowed-down, majestic psychedelic house track. The music eventually gives way to the sound of the pig being eaten in a restaurant. The munching up close to the microphone complete with satisfied ‘mmmm’ noises and the smacking of lips sounds truly gluttonous and revolting especially having followed the pig’s life. Herbert may not be an animal rights activist but he does do a good job of illustrating cause and effect and this is certainly no glorification of eating meat.

The album ends in ‘May 2011’ when Herbert re-visits the pig pen where the creature first came into being and delivers an acoustic lament to the pig. Here he disregards experimental music completely yet it sounds like a radical departure that fits.

With a lesser musician it could have ended up as a big pile of wank, but as it stands One Pig is a fascinating journey from someone at the top of his craft. Thought-provoking, mood-inducing and well worth listening.