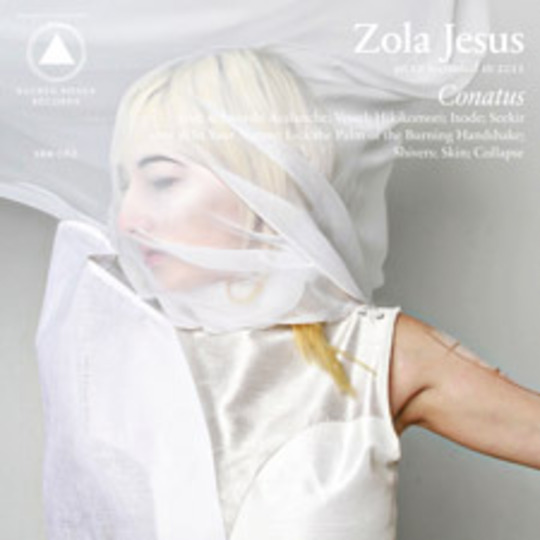 "Conatus: A force or effort simulating a human effort."

While that's just one out of numerous definitions associated with the word 'conatus', it perhaps goes some way to explaining the title of Nika Roza Danilova's (aka Zola Jesus) third long player. Delve further into its origins and you'll find the phrase associated with a number of philosophers, most notably seventeenth century Dutch scientist Baruch Spinoza and his English counterpart Thomas Hobbes. The former's reasoning that 'the force in every animate creature toward the preservation of its existence' still holds true in many psychological mind-over-matter theories today.

As a former philosophy student herself, it's clear that Danilova puts as much effort into the thought behind her songs as she does the music, which seems to take on an almost perennial dark edge. Only recently she stated "I really appreciate artists that constantly evolve and challenge themselves, and I see this record as being about that," and Conatus is certainly a challenging, occasionally harrowing listen in many ways.

Since crossing over to a brand new audience at the start of last year thanks to the Stridulum EP followed five months later by her album of the same name (Stridulum II for the pedants), Zola Jesus has emerged as an unlikely voice for the disenchanted and disaffected sub-genre known as goth. Which is perhaps a tad unfair, because despite the mysterious overtones of her music, coupled with a vocal style referencing that of Siouxsie Sioux and Liz Fraser (among several others), the musical arrangements that punctuate her work owe more to the classical training Danilova received from childhood back in Wisconsin.

As on her previous records, Danilova writes and performs pretty much everything herself (bar the odd contribution from drummer Nick Johnson) and it's this singular determination to succeed that's already seen her write in excess of 50 new compositions since Conatus was completed that sets her apart from any contemporary you'd care to mention.

From the 64 second introduction that is 'Swords', which sounds like hot liquid being poured down a drain while a cavalcade of drums and sinister echoes build up on the horizon, to the haunting climax of 'Collapse' - on which swirling keyboards pave the way for a resounding orchestral finale befitting of Philip Glass in his prime - Conatus delivers crushing blows throughout.

Lyrically obtuse and for the most part inaudible, Danilova still manages to convey an unassuming level of emotion in her voice. The cinematic 'Hikikomori' for example seems to mention the words "blister", "sister" and "golf ball", and even if we were to be making up that last bit, it would be an interesting diversion from the depths of despair Zola Jesus is alleged to occupy.

Perhaps the biggest (and some would say only) drawback with Conatus is when Zola Jesus reverts to type in an almost routine fashion. 'Avalanche' and 'Vessel' sound like outtakes from her previous long player, a fact that's borne true in the case of the former, which was conceived around the same time as Stridulum II. However, at its best, Conatus rises intelligently like a disco dancing phoenix from the flame on the pulsating 'Seekir' and equally adrenalin charged 'Shivers'. 'In Your Nature' too bears all the hallmarks of a latter day Sisters Of Mercy, albeit after having acquired the feminine touch.

When Danilova slows the pace down somewhat on piano-driven ballads 'Lick The Palm Of The Burning Handshake' and penultimate number 'Skin', whose melody occupies a similar floor space to the one used by The Lotus Eaters on their 1983 opus 'The First Picture Of You', her icy vocal draws comparisons with Tori Amos at her most laconic. Haunting until its final breath is drawn, Conatus pretty much does what it says on the packaging, its creator's endeavours in no way wasted on what is a worthy addition to a body of work of uncompromising consistency.