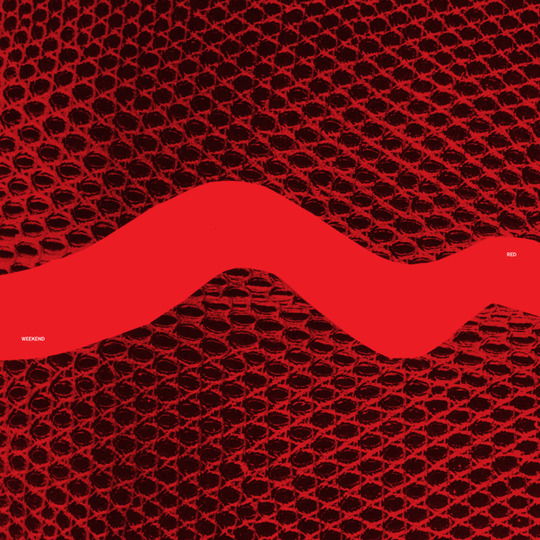 When the then unknown quantity that was Sports landed on the doormat around this time last year, its monochrome sleeve giving little away other than the title and artist's name. However, once the nine songs its cavalcade of sonic destruction were made of had landed within earshot, it barely left the confines of my stereo. However, the mysterious three-piece responsible for such an astonishing record, Weekend, remained just that; a relatively obscure trio from the San Francisco underground.

Fast forward a good few months into the early part of 2011 and their first venture into Blighty, it was clear to see for anyone watching those shows that Weekend were an even more potent force in the flesh. Not least because buried underneath the sonic annihilation were a band whose hearts lay in the first wave of the UK post-punk scene. Indeed the band themselves said as much at the time, citing New Order, Joy Division, Wire and Magazine as greater influences than any of the shoegaze or noise outfits they'd found themselves compared to.

Moving on another six months or so, such boisterous claims can now be held in gospel-like terms, such is the way each and every one of the five songs that make up the Red EP veer between the eminence of new wave to the occasional spurt of white noise and distorted vocal at regular intervals. Recorded earlier this summer prior to July's European tour in the San Francisco studio of one-time Swell bass player-cum-producer Monte Vallier, the Red EP is the sound of a band already moving on to their next conquest, busily foraging ideas while collating a sonic vision that doesn't necessarily rely on excess.

Opener 'Sweet Sixteen' proffers a slow and heavy build up, where drums collide with a doom-laden bass, aided and abetted by Shaun Durkan's effects driven, echoey vocals. Although atmospheric in structure, 'Sweet Sixteen' resembles the aural equivalent of a nervous breakdown in three parts before. Tense, desolate, yet thoroughly engaging without ever giving a hint as to what might be on the agenda next.

Which is where Weekend really come into their own. As 'Sweet Sixteen' descends into a noise infused outro, 'Hazel' is introduced via a halo of drums and ferocious burst of feedback before metamorphosing into an avaricious pop creature not too dissimilar from The Cure circa Pornography and arguably Weekend's most fluent creation to date. Riding on a mostly inaudible lyric that could be about a girl, there's a brutal sense of poise and ingenuity one hopes will influence the way pop music becomes augmented by future generations.

Moving away from that dynamic altogether, 'Your Own Nothing' is possibly their most obvious nod towards 1978 thus far, its lolloping bassline not a million miles from 'Public Image' by Public Image Ltd. Although savage in its vocal delivery, there's even a point where Shaun Durkan takes his four-string into dubbier territories. 'The One You Want' meanwhile takes a leaf out of Wire's book, coming on like the brattier Stateside cousin to Newman, Gilbert et al's 'I Am The Fly'. Once again preferring melody to all-out sonic assault, it could quite easily have acquired the status of lead track in its own right, were it not for the high standards of the rest of the competition here.

Closing number 'Golfers' is perhaps the closest Weekend get to the murkier depths of Sports. Crawling along on the same downbeat path as The Telescopes' 'Nothing' or Daisy Hill Puppy Farm's 'Rocket Boy', it bears all the hallmarks of a funeral march only to increase both volume and velocity over the final third before erupting amidst reverb, feedback and rumbling drums on its finale.

For a band with barely a handful of releases to their name, Red is another tick in the box. With the follow-up to Sports due in the early part of 2012, we anticipate it being one to watch out for, even before 2011 has drawn its last breath. Until that time, this comes highly recommended as an appetiser.