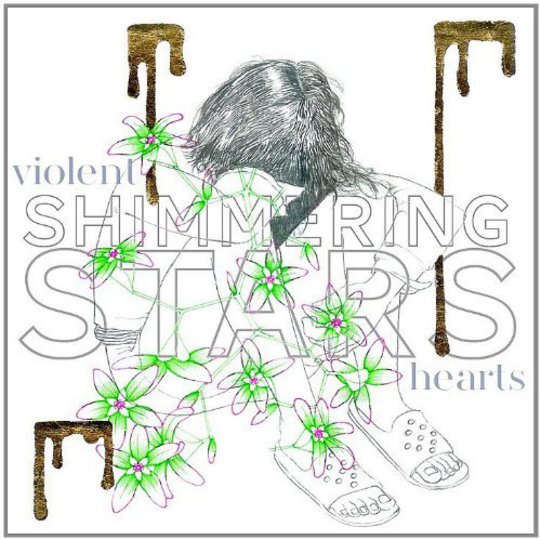 Some time around the turn of the year, a chance encounter with Shimmering Stars’ gorgeous single ‘I’m Gonna Try’ led me to expect that 2011 would see their reverb-drenched Sixties harmonies take over the blogosphere. Like most of my predictions, this hasn’t (as yet) come to fruition, and the band slipped back beneath the radar somewhat until the announcement of Violent Hearts, the Vancouver trio’s debut album. Still, the year is only two thirds down, so maybe they can still make a late break for that catch-all internet domination I anticipated.

As it turns out, the evidence presented by Violent Hearts suggests that such a notion might not be all that far off the mark. Sure, nothing here really improves on the the aforementioned ‘I’m Gonna Try’ (which is present), but there are numerous encouraging occasions where they run it pretty close, most notably in the shape of ‘No One’, 'Dancing to Music I Hate' and ‘Sun’s Going Down’. The album is pretty heavy on wistful, youthful love songs, but there's never really a point where it feels cloying or forced. I expect this might have something to do with the record’s conciseness, with the average song length being about two and a half minutes, and the whole album being over in under half an hour. Above all else, though, Violent Hearts is an impressive work out in big pop song-craft.

Indeed, the band’s unnervingly consistent ability to thread a killer hook through the pools of reverb is far and away their strongest asset, and it is this which makes the crucial difference between Violent Hearts being a legitimately strong album and a gimmicky exercise in hero worship. You see, in the same way as the likes of Magic Kids, Yuck and The Smith Westerns before them, Shimmering Stars are one of those bands whose influences (in this case The Everly Brothers, Spector, Beach Boys etc etc) are etched so nakedly and so blatantly into every fibre of their music, that the songs have to be good, otherwise they’d just look a bit daft.

Of course, in the face of a band like Shimmering Stars, there’s always going to be that tiresome old argument lurking around the corner that any artist whose sound is so heavily rooted in their forebears is somehow less worthwhile than those who break new ground, but, well, it just feels churlish to quibble about such matters when faced with a record as cheering as Violent Hearts. Yes, it’s enormously derivative, but it’s also frequently exhilarating, so who gives a shit?