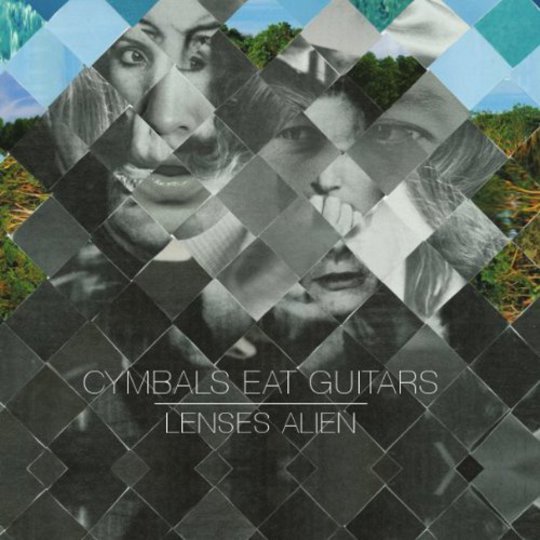 When New York’s Cymbals Eat Guitars first thrust themselves into the reckoning in 2009 with Why There Are Mountains’ punchy histrionics, there lay both a young four-piece with a natural song structuring ability and a tantalising sense of much more to come. For while even the most sprawling numbers in their multi-layered rock arsenal were still able count on a number of hooks that lingered in the memory, the group, led by the untethered vocals of front man Joseph D’Agostino, were prone to growing overly restless within tracks, having moments where their patience over such meticulous preparation would snap. You felt that, given a couple of years maturing, they’d reach these breaking points and hold their nerve, managing to maintain the noise-fuelled peaks without breaking momentum.

Those two years have now passed and, on Lenses Alien, it’s clear that the four-piece have developed jaws of a most chiselled stature. The raging and ranting peaks are now more focused, yet without uncoupling the helter-skelter emotion that so excited first time round. In fact on this second LP of theirs everything seems larger, their feral energy placed onto a spacious canvas that allows considerable breathing space. The omens are good when it opens with the eight and a half minute ‘Rifle Eyesight (Proper Name).’ A track that sees D’Agostino’s vocals initially jump from lulling to fraught with familiarly violent gear changes, it then twists and transcends into a falsetto that drifts away above keyboardist Brian Hamilton’s fluttering notes, the latter’s fingers working rapidly to coat the swelling noise with a smattering of finesse. We’re only four minutes in at this point and it’s already sounding like the best thing they’ve done, a conviction only strengthened when they appear out of the song’s other side with a rousing-without-being-rambunctious coda fixed around a recurring 16 bar guitar riff that fights to be heard.

This is just one example where the group have set their sights on bolder plains; everywhere there are previous components being tweaked and enlarged. The would-be two-minute shoegazey filler of ‘The Current’ feels so grand, with guitars plunged deep amongst a watery depth, that neighbouring tracks ‘Another Tunguska’ and ‘Wavelengths’ find themselves battling some rather unexpected competition. They ultimately succeed in this duel though, the former majestically rising from lonely balladry to fully-bled rally with backing vocals – welcome in their increased prominence throughout – holding up D’Agostino through the choruses. ‘Wavelengths’ meanwhile is of a straighter shape, a lushly recorded slice of piano-brushed melancholy that shows the group’s Pavement influences remain intact.

Perhaps what’s most impressive is how Cymbals Eat Guitars have managed to keep the best elements of their debut in place, resisting the urge that so many succumb to of needlessly ripping up their sound in an often clumsy attempt at proving progression. Tracks like the various cascading segments of ‘Shore Points’ would sit comfortably on Why There Are Mountains, yet they work here too on an album that has undoubtedly moved forwards.

A sense of humility beneath the sonic ambition remains, and the confidence that exudes from the group as musicians still doesn’t cover their sense of fragile openness as people. Lyrics, meanwhile, still flit around psychedelic vision seen through school boy eyes, for instance ‘Another Tunguska’s “then a stream of revenants surged outward like prominences from the sun … at once I was flat on my back my skateboard rolled on down the hill.” Indeed, the sense of the LP being nothing more meaningful than a vivid trip is heightened when, towards the end of the closing ‘Gary Conduit,’ D’Agostino saves his most unholy roar for what would appear to be the punch line of the whole album, “is it teeth-shaking polyphony grace and completion, or nothing?” As a potential self-destruct button to all of what’s just been heard, it’s on a par with Mansun’s ‘An Open Letter To The Lyrical Trainspotter’ as, like Paul Draper, the singer seeks to denounce all he has just recorded.

With Cymbals Eat Guitars, however, the interpretation feels more open ended, and if the lyrics are indeed a send-up then such humour can only be welcomed, for perhaps it’s this self-realisation that’s allowed them to step back from the frayed edges of their debut. Ultimately, whether rattling along on the Trail Of Dead-leaning ‘Keep Me Waiting’ or offering a broad crescendo on mid-point highlight ‘Definite Darkness,’ each track on Lenses Alien offers a different facet to the band that still manages to bear relation to the many others. With their nerve held, this is Cymbals Eat Guitars at an impressively high creative watermark still early in their career.