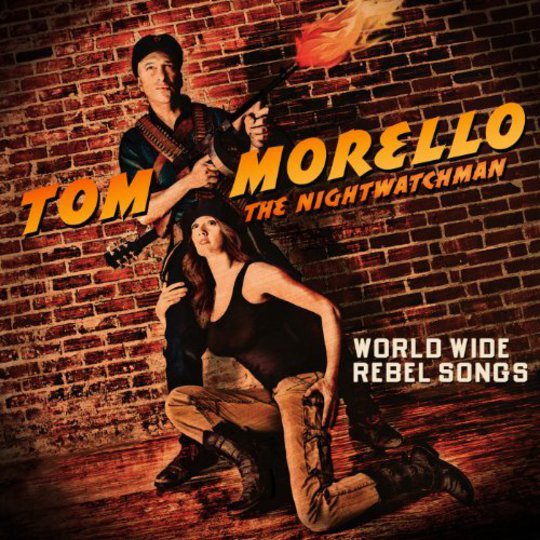 Like many a teenage guitarist, I was once enamoured with Tom Morello. Evenings were frequently spent wondering how he made those crazy sounds and attempting to master the bombastic riffs which made Rage Against the Machine such an explosive force throughout the Nineties. Now, eight years on from my obsession and 20 years since RATM’s all-important debut, Morello’s career has slowed down somewhat. Not since his brief, and by the end underwhelming, stint with alt-rock supergroup Audioslave has he produced anything resembling a mainstream rock success story, instead focusing on protest-folk alter ego The Nightwatchman.

That this, Morello’s third release under the guise of folk troubadour, is now prefixed with his own name is very telling; World Wide Rebel Songs essentially attempts to cram everything that falls under the Morello brand onto one album, with solo acoustic strummers sitting next to hard-rock riffathons, plus everything in between. Combine this with the woeful/brilliant Eighties action hero cover art and it’s hard to gauge just what Morello thinks of himself, not to mention his audience: is he at one with the people and the union workers he so frequently references or is he their guitar-toting hero, here to save the day?

Unsurprisingly, listening to World Wide Rebel Songs fails to provide a definitive answer to Morello’s identity crisis; this is a veritable jumble sale of an album and one that lacks any sense of pace or cohesion, instead settling for sheer eclecticism. Not even the presence of the behatted one’s live band, 'The Freedom Fighter Orchestra', can balance the Jekyll and Hyde that is The Nightwatchman’s musical output, as the likes of admittedly accomplished funk-pop opener ‘Black Spartacus Heart Attack Machine’ create a rather jarring sound clash when placed next to the Latino acoustic strumming of ‘The Dogs of Tijuana’.

Although the genre pendulum continues to sway throughout the record, never quite settling on one consistent sound, it is easy to see where its influences lie. In fact, you can directly map several tracks onto their respective socially conscious benefactors:

Overall, only ‘It Begins Tonight’ surprises in its influences, with more than a passing resemblance to The Strangeloves’ oft-overlooked world wide rebel song and extended freedom metaphor ‘I Want Candy’.

While Morello’s lyrics usually deal with metaphors of war, epic struggles and general bad-assery (for example, ‘Branding Iron’: “I'm a thousand tornadoes screaming across the plains / I'm Gabriel's horn on Judgement Day / I'm months of darkness, I'm years of rain / God's branding iron bares my name”), perhaps the most salient line he utters across the whole record lies in the aforementioned ‘It Begins Tonight’, which he dubs “a crossword puzzle of stolen chords”. This lyrical vignette describes much of World Wide Rebel Songs and, indeed, contrary to his intention, Morello steals and imitates rather than celebrates the long and rich history of protest songs.

With that said, World Wide Rebel Songs does have occasional moments of genuine inspiration. Ben Harper provides an impassioned counterpoint to Morello’s baritone in ‘Save the Hammer for the Man’, which also features one of the latter’s better guitar solos in the last decade, while the album’s more traditionally stripped-down Nightwatchman acoustic anthems, in the form of ‘Branding Iron’ and ‘God Help Us All’, comfortably fit Morello’s self-proclaimed 'black Woody Guthrie' aesthetic.

Nonetheless, there’s the underlying feeling that this album was made to appeal to as many audiences as possible and, in doing so, to partially placate the many fans still waiting for a non-existent RATM reunion album. Instead, what they’ll find is Morello’s homage to both himself and his heroes and, while World Wide Rebel Songs exudes confidence, its execution is like attempting to cross too many ‘T’s with your eyes closed: odds are that you’ll get one or two right, but it’s impossible to consistently hit the mark.