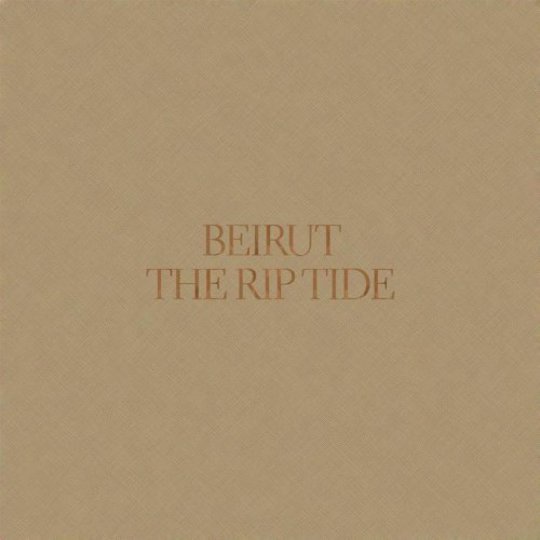 A large part of Beirut's charm has always been Zach Condon's steadfast refusal to allow his band to be in any way tied down to such reductive nonsense as genres. Not that that's ever stopped anyone of course, with the Wikipedia page alone slapping on labels like 'Balkan folk', 'indie folk', 'electronica' and that ultimate vagary when simply no other label will suffice: 'world music'. Honestly, was there ever a more stupidly transparent attempt to define something that just escapes immediate definition? For what it's worth, this reviewer has always wondered why nobody ever thought to put Condon on the soundtrack to a Gabriel Garcia Marquez adaptation that was actually good.

It's with all that apparent stylistic multiple personality disorder, then, that third album proper The Rip Tide strolls along. On the whole more 'Elephant Gun' than Gulag Orkestar, the album definitely leans more towards the singalong end of the Beirut spectrum. You might even say there's an element of Condon exploring his inner pop singer-songwriter on songs such as 'Santa Fe' and 'Vagabond'. Only a small element, though; this is Beirut after all. Paired with the album's running time of only 33 minutes, it's a sign of the album's relentless focus on distilling the songs into their purest form, rather than Condon suddenly making a play to be the next major X Factor songwriter.

Not for nothing is this being described as Condon's most inward-looking record. Opener 'A Candle's Fire' muses on the perennial muddle of relationships, commenting on the song's subject's "endless need for games". 'Santa Fe' talks about the longing for a hometown you once thought you'd never return to; a pertinent tale given Condon's own fabled history of travelling around Europe. 'Goshen', meanwhile, depicts the moment of needing to step up to the plate; in many respects, it's his "time to rise or fail". And 'Payne's Bay' finds Condon in possible self-castigation mode, having found himself "headstrong today, I've been headstrong" - or, possibly, wondering if it's something to in fact praise himself for instead.

Lyrically, the album generally follows along the thematic lines of Finding Oneself, tying in with the frequent allusions to home. At the album's core is the tug of war between looking forward into the wider world with all its accompanying confusion and mess, and the longing to return to home and a more simple, but perhaps less exciting life. 'Port of Call' sums up best the conflict in living up to others' hopes for you, and the pressure that in itself brings: "May you have hope for me now/I danced all around it somehow".

Ironically, considering the introspective nature of the lyrics, The Rip Tide is the album that sounds most like the product of a whole band working in unison, while retaining many of the quirks that set Beirut as a unit apart. It sounds exactly as you'd expect a Beirut album to sound, with the trumpets and ukeleles and occasional dashes of electronica. But this time out, there's less of the 'kitchen sink' feeling that suggests; the title track finds the band at possibly their most lush-sounding to date, sounding a tad like the Balkans channelling Bacharach. The fact that the album is being released on Condon's own label in order to retain full control over their music is a bit of a misnomer; it is next to impossible to imagine Beirut ever sounding like anybody other than completely themselves.

The Rip Tide is neither a sandblasted version of Beirut, nor the band at their most idiosyncratic. The experiences of a man who's travelled the world are in full effect; this is definitely not the 'sod it let's go mainstream' efforts of a band who need to sell or they'll be dropped, like many quirky bands before them. The irony is that, on Condon's own terms, this is easily Beirut's most accessible-sounding effort yet. So maybe the full-on limelight is finally ready to embrace Beirut. Or maybe Condon's finally ready to embrace the limelight. Well if he's not yet, he certainly should be.