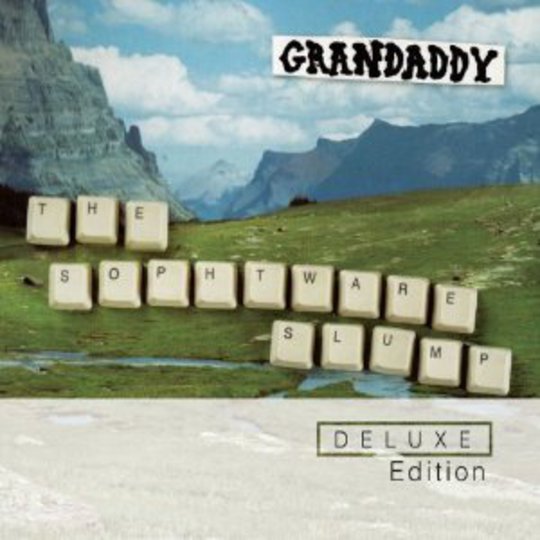 Coupled with a certain space and time, some albums are just the most evocative things. Grandaddy’s The Sophtware Slump will always be a university album for me, though I’d been listening to it for a while before I started studying. I touched on why a while ago, and now, on its eleventh anniversary, I have a few hundred words to expound on the subject.

The ‘Sophtware Slump’ is a reference to both the theme of the record (that of doubts pertaining to technology in modern society) and the ‘sophomore slump’ that befalls so many bands in following up their debut releases. It is a heady, beautiful and ambitious work that holds up with contemporaries such as Mercury Rev’s Deserter’s Songs, Wilco’s Summerteeth and The Flaming Lips’ The Soft Bulletin, all of which arrived just before the new millennium – a rich period for adventurous, subversive re-imaginings of what, exactly, constitutes ‘Americana’. The Sophtware Slump, fittingly, dropped in May 2000, and is Grandaddy’s key offering, adored by artists from Conor Oberst, Jeff Tweedy, Midlake, The National and MGMT to the Super Furry Animals; wholly worthy of reissue treatment. It is often equated with OK Computer, and not without reason: the two share a principal theme, both wring considerable human emotion and depth out of clinical subject matter, and neither baulk at long running times for multi-segmented individual songs.

It opens with ‘He’s Simple, He’s Dumb, He’s the Pilot’: nine minutes in length and an effective mission statement for the record. Sharp, clanging acoustic guitars mingle with sampled birdsong and bandleader Jason Lytle’s frail intonations (“Did you hear them yell ‘Land, damn it land’?”) before the ‘pilot’ of the title touches down and waves of synth and acoustic guitar open the song up. Lytle’s tone becomes softer and sweeter (“It’s just nice to have you back again”), before, finally, twinkling electronics and strings endow it acres of wide-open space. It’s a gorgeous introduction, soon displaced by minor chords, crackles of static and deep, sonorous backing vocals. Two lines are repeated over each other as the song winds its way to the finish line: “Did you love this world and did this world not love you?” and the probing “Are you giving in, 2000 man?” The song finishes, pointedly, with a plea: “Don’t give in, 2000 man.”

There are many ways to read ‘…Pilot’, to consider ‘2000 man’ and who or what he represents. Mankind on a broader scale; the concepts of isolation, seclusion, obsolescence; the inherent difficulties in returning to something or somewhere now daunting and unfamiliar. Whatever, it remains as spine-tingling now as it was eleven years ago, and crucially not without hope and a sense of empathy. Because while this record is heavy and sad, it is bold and generous too; in its melodies, its sonics, its structure. The real weepies here (‘Underneath the Weeping Willow’, the ‘Jed’ pair – and oh, how gorgeous they all are) all nestle up to more uptempo moments – shining, effervescent pop songs like ‘The Crystal Lake’ and ‘Hewlett’s Daughter’, breezy in the face of water-based apocalypse, or the thrashy ‘Broken Household Appliance National Forest’, which takes the Nature vs. Technology theme illustrated by the cover art to ridiculous extremes.

But back on that melancholy, or more specifically, ‘Jed’: the doomed, cobbled-together humanoid whose plight haunts these songs. His story is detailed on the disjointed, spaced-out ‘Jed the Humanoid’, where he’s assembled to amazing scenes, only to dwindle and fade as his creators begin to lose interest, before eventually turning to alcohol and his (literal) undoing. His story is fleshed out by a later song in the form of a poem Jed left behind before he ‘stopped’. Lytle, in the guise of one of Jed’s creators, sings the verses over a deep, bruised groove: “I try to sing it funny like Beck / But it’s bringing me down / Lower than ground / Beautiful ground.” It’s a sad tale – a parable, more or less, of something (someone) left behind, useless and alone to the end – and it could so easily have been ridiculous. But the conviction; the plaintive, longing tone with which Lytle sells it not only makes it work, but transforms it into something utterly resonant and genuinely heartbreaking.

Grandaddy released several compilations, EPs and splits alongside three other studio albums between their inception in 1992 and dissolution in 2006, and this deluxe edition gathers plenty of great B-sides and miscellany from The Sophtware Slump era. ‘Aisle Seat 37-D’, ‘I Don’t Want to Record Anymore’ and especially ‘She-Deleter’ offer up playful, sometimes schizophrenic visions of where the band were at during the time, among over an hour of bonus material. There are no more Jed songs in the archive (‘Jeddy 3’s Poem’ doesn’t feature, oddly), though the previously unreleased acoustic demo of ‘Jed’s Other Poem’ should be a boon for fans, likewise that of ‘Hewlett’s Daughter’ and the original intro to ‘…Pilot’.

‘Jed’s Other Poem’ is subtitled ‘Beautiful Ground’, one of numerous references to ground, water, and nature in its simplest, most unadorned state. Lytle was heavily influenced by his Modesto, California roots, as seen in this revealing interview with the Guardian, which details his jittery, drug-addled mindset while writing and recording the album, something he accomplished on his own in a farmhouse in the middle of nowhere: “In my boxer shorts, bent over keyboards with sweat dripping off my forehead, frustrated, hungover, and trying to call my coke dealer,” he laments.

Which kind of makes sense: The Sophtware Slump is clearly the product of a fragile, sensitive mind; one plagued by unease relating to the oncoming turn of the century and the gradual loss of interaction with our environment. But as stated, it is not a vision bereft of hope or vestiges of clarity. Closing the record is another tear-jerker, one that shifts the focus from the earth to the heavens: ‘So You’ll Aim Toward the Sky’ should perhaps be inseparable from ‘Miner At the Dial-a-View’ the song from which it segues, where another lost narrator dreams of returning to a home he left long ago, hopelessly pumping money into a machine that effectively acts like Google Earth does now.

‘…Sky’ makes for a grand farewell, though to what, exactly, is not clear. But as it closes, the humanised female voice of the ‘dial-a-view’ returns to offer the miner good luck. He replies wearily, but in kind. It is a small, mundane exchange, but an essentially human one. There’s got to be something in that.