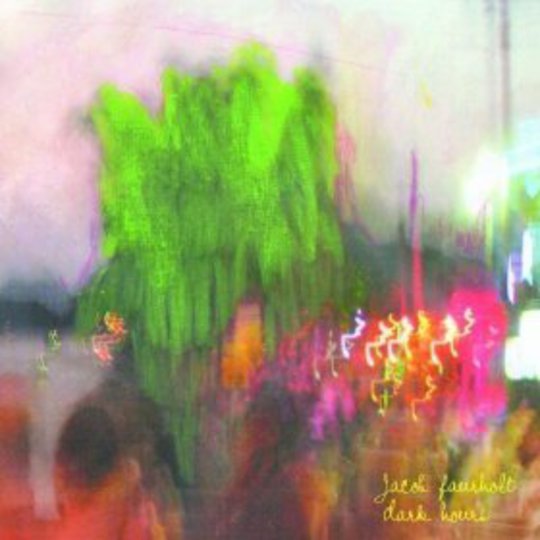 He might be Danish by birth, but from the first dirgey guitar chords of the titular opener of his third album Dark Hours, Jacob Faurholt instantly transports the listener to the sort of gothic Americana hinterland that has been populated by the likes of Will Oldham and Sparklehorse. A place where, on record, the beautiful side of life is never too far from the darker side. The distortion on 'Dark Hours' doesn't bolster the skeletal guitar so much as it lends it a lingering decrepitude which compliments Faurholt's creaky vocals and gives the chorus of wheezing squeezebox and subtly brushed slo-mo drums the feel of a gorgeously meek rallying cry.

His sinister side is most fully indulged on the penultimate 'So Far Away', which is built around the creeping horror movie tension of a tinkling piano, adding distant reverb-laden 'Be My Baby' drums a la Jesus & Mary Chain, acoustic twang and the muffled lo-fi sound of distorted bass, all of which eventually dissolves into a drift of unsettled squeezeboxes. For what it is it's effectively executed, but it comes off a little over-cooked, not helped by the forced monotone vocals.

Indeed Dark Hours is a more satisfying record away from the extremes of its sonic vocabulary, combining mainly acoustic textures with lo-fi indie-rock crunch and rudimentary experiments with found-sound. Given its name, 'Themes of a Troubled Mind' is deceptively gentle in sound and optimistic in sentiment with Faurholt's coarse whisper of “Today's the greatest, tomorrow will be better, trust in all this hope” over dry guitar and a slight drizzle of organ. 'Black Lake Lodge' is initially more doleful in tone, but the murky bass that anchors the first half of the song gives way to the bright clarity of plucked banjo and peeling violin. While this conjures up images of rustic Americana (all splintering cabin porches, flaking paint work and backing choruses of crickets), 'The Hoax' takes things one step further with the constant background noise of falling rain. It sounds heavy-handed on paper, but on record it's beautiful, with no small credit due to the backing vocals of Nona Marie Invie, the perfect foil for the prematurely wizened Faurholt.

In fact the presence of vocal accompaniment becomes rather a decisive matter maintaining interest in the second half of the record: Faurholt himself doesn't have the most distinctive voice you're likely to hear. There's not the slightest hint of Danish in his wholly American drawl. He does stray from the prevalent slurred style, but his adoption of a Conor Oberst-esque (earnest, high-pitched) yelp on 'Medicine' suggests an artist perhaps a little too in thrall to his influences to be a truly honest and dynamic singer in himself. The vocal contributions from other singers thankfully provide a pretty pleasant distraction from this point. Sóley Stefánsdóttir of Icelandic group Seabear, provides beautifully complimentary harmonies on 'Creatures In the Sea', a Low-esque mid-paced jaunty number complete with glock tinkles. Conversely on 'Like Cars Crashing' the vocal harmonies provide an appropriately off-key backing to the slighty off-the-beat ukulele strumming.

It's not all just pleasantness here though. The little experimental flourishes are genuinely thrillingly. The first time the wailing FX and lo-fi drum machine interrupts the plaintive verses of 'Directionless' it sounds horribly incongruous, yet next time round the two sections converge into one and sound perfectly (and shockingly) harmonious. Likewise the passages of trebly noise-pop which sound like they're coming through a cheap radio on 'Medicine' are brief, but joyous successes, ingeniously bringing some straight up catchy pop to an otherwise dourly atmospheric record in an oddly incidental manner. A perfect example of the little pleasures to be found on a record that is a long way from perfect, but never far from intriguing and atmospheric.