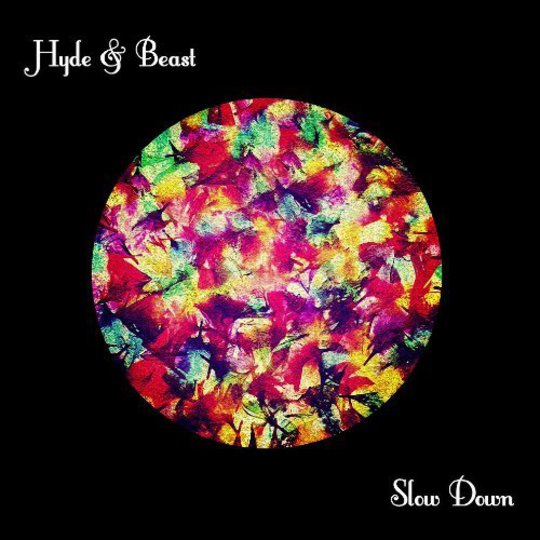 If you’ve followed the career of The Futureheads, you’ll know that much has changed since the jerky, punky, time signature changing days of their debut album. These days their sound is more polished and more restrained. It’s not something The Futureheads should be criticised for – they continue to write some of some of this country’s finest guitar-pop – but it makes you wonder where that thirst for avant-garde experimentalism went.

Well, the fact that their next album is going to be entirely a cappella might provide some answers. And so might Slow Down, the far-from-accessible debut album from Hyde & Beast. The record is a self-produced collaboration between Neil Bassett, who North-East indie fans will remember from The Golden Virgins, and The Futureheads’ glum drummer Dave Hyde.

You might remember Dave best (if not for being able to play the drums by only moving his arms from the wrist down) for his brief turn as lead singer on ‘Danger Of The Water’ from The Futureheads. His muffled mumblings made that song all the more sinister, and undoubtedly the bands’ most unsettling track to date. So it’s no surprise that Slow Down, with Hyde on lead vocals, is darker than any album he’s worked on before.

Just take ‘You Could Buy Me Anything’ which is built around the low, tuneless strum of a guitar, collapsing into a chorus of Dave’s creepy falsetto. Its suicidally slow pace and twanging dissonance gives it the feel of a Field Music 7-inch being played at 33rpm instead of 45rpm. This bleakness is matched by the track that follows, ‘All Because Of You’, as vocals are slurred and chords are audibly wrenched into something approaching life. But as much as these songs might sound like a slog, they’re full of charm and beauty.

Opener ‘Never Come Back’ is the best example, as it does what all opening tracks should, by setting out the Hyde & Beast blueprint. The introductory piano plays droopy major chords that sound as though they’re being played at the end of a crumbling pier in a rainy northern seaside town. The sky outside is grey, but the pianist is muddling on and making the best of it anyway. The emotion of the song peaks with a chorus that brings in a jubilant brass band to gloss over the gloom. It’s both a clumsy and brilliant twist.

It’s also quite bizarre, which is another of this album’s themes. ‘Last Chance For A Slow Dance’ is stranger than most, with lyrics that plead for a leaving lover to stay. What’s odd is the way lines like “I would give the sky / For just one more night / Please just stay” are literally moaned, almost reluctantly, as though the sentiment is a chore. It’s a superbly surreal take on a love song, even if it’s not one that’s like to win any woman’s affections (unlike genuine tearjerker ‘Go To Sleep’). Stranger still is ‘Wolfman Blues’ which combines fuzzy sub-Libertines guitars, honky-tonk piano and a sludgy bass, all playing in different keys like a hazy Eno-era Roxy Music artrock jam.

Hyde & Beast turn off course again with ‘You Will Be Lonely’, which is an authentic and unusually jolly country-dance number – a wry, British take on bluegrass. It’s one of two tracks to feature Field Music’s David Brewis and another ex-Golden Virgin, Lucas Renney on bass and guitar. The pair also appear on ‘Lord, Send For Me’, which has subtle Eastern influences that make Hyde & Beast’s ‘Tomorrow Never Knows’. What’s great about Hyde & Beast is that they’re able to explore such diverse varieties of music – snippets of British music hall and Sixties psychedelia, fragments of glam rock and folk, a slight White Album aesthetic – but always in a tasteful way. Their songs are never bland genre studies or tedious pastiches. The pair maintain a hushed reverence for their musical influences and treat them with their own subdued personalities. It all makes for a record that is undoubtedly their own and unlike any other. Make no mistake, Slow Down is not the feel-good album of the summer, but it’s an unusual and impressive insight into the weird and wonderful world of Hyde & Beast.