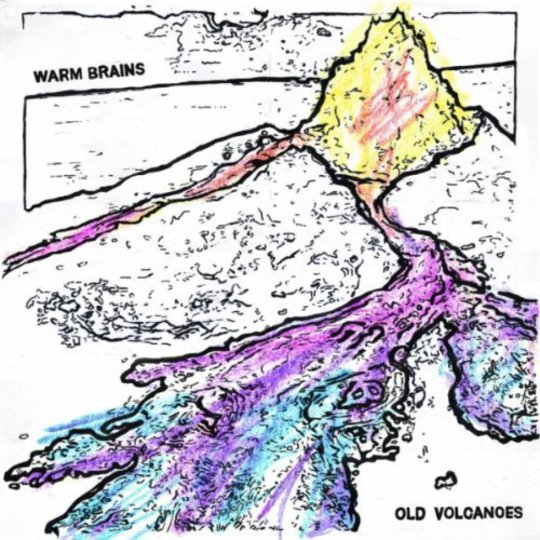 With the Nevermind baby nearly old enough to sup its first Bud in a US bar, grunge’s dirty roots have once again taken hold with countless new bands rolling-up the sleeves of an old Melvins t-shirt, lacing a shiny new pair of DMs and kicking the reverb pedal. With howled Dinosaur Jnr solos and fevered fuzz, Warm Brains’ debut single ‘Let Down’ initially indicated that Rory Attwell’s new project would be following in the same rubber soled footprints. But his debut album Old Volcanoes shows Warm Brains is anything but another square in this plaid plague.

Since coming to the attention of the public psyche as one third of short-lived teen thrashers Test Icicles, Attwell has always been a team player rather than a leader. Going on to form Kasms he still took the backseat as a guitarist hiding behind lead singer Rachel Mary Callaghan’s flamed-haired howls. Leaving the group early last year citing the reason as a change in the band’s dynamic, he took a further step-back taking the role of the go-to producer for east London’s bands, like Male Bonding, Fair Ohs, Veronica Falls and Teeth!!!

But, rather than do a Syd Barrett and slink further away from the limelight, Old Volcanoes is Attwell coming to the fore and taking full-control for the first time in his career. Recorded over six months in the studio he co-runs with Tom Vek, he single-handedly wrote, performed and produced all of the tracks alone, only seeking help for the female vocals on three tracks roping in Veronica Falls’ Roxanne Clifford, Gemma Fleet from Trogans and Florence Van Camerijk from Paradise.

The record starts like a blurred image coming into focus as the disconnected chords of first track ‘Worried Seed’ are suddenly overtaken by a pounding bass, which is then lacerated by a jagged-psych solo before ominous soaring choral melodies engulf the entire track. This tension bubbles under the surface throughout the album ever so often rearing its head and taking a gnarled bite, like the disgustingly dirty bass-line and disembodied vocals on ‘Marble Arch’ and the nose-bleeding disorientation of ‘This Salt Makes Me Sick’.

But as a record it’s not a rough ride; Attwell maps out a measured journey of a mix of emotions and musicality as he punctuates boisterous noise with sweetened pop. Title track ‘Old Volcanoes’ has an infectious sway reminiscent of Blur’s ‘She’s So High’ and single ‘Let Down’ is a pure fun furied freak-out. He injects breathers in the shape of Van Camerijk’s gentle harmonies on the melancholic yearning of, ‘Painting 2ft Tall Lines’ and the sleepy chorus rich closer, ‘Stone To Sand To Glass’.

With Attwell playing all of the instruments each track could have easily sounded disjointed - himself admitted that he struggled to translate the ideas from his head into reality. But they never do. ‘Rotunda’ gives a glimpse of how Attwell built each song as the guitar solo, his preferred instrument, hinges the track leaving the bass and drums to create a dense fog around it. Whilst ‘Weird Eyes’, although not the catchiest track, has an off-beat tempo reminiscent of the musical deviancy of These New Puritans as eerie piano loops chase tumbling off-kilter drum beats.

Not the strongest singer, Attwell pushes his vocals throughout the record, changing their shape and character. For the most part, like on title-track ‘Old Volcanoes’, ‘Let Down’ and ‘Drunk Drivers’ Attwell sticks in his most comfortable range half-chanting school playground melodies. But, on ‘Marble Arch’ and ‘Weird Eyes’ he makes his vocals sound almost roboticised and contrarily ‘Painting 2ft Tall Lines’ and ‘Stone To Sand To Glass’ reducing his voice to a choral whisper complimented by the hushed female backing vocals.

Lyrically, it appears to be a cathartic album with the words veering towards the confessional. Title track ‘Old Volcanoes’ has the deadpan “don’t help when you spend another night with someone who’s my friend and I’m not invited” and ‘Painting 2ft Tall Lines’ offers the painful refrain: “I try to hold on, I hold onto you”.

Attwell’s debut perfectly demonstrates the art of loud, quiet, loud music that clutches onto pop sensibilities in one hand and a distortion pedal in the other; something only a handful of bands, let alone solo artists, have ever really truly having gotten right.