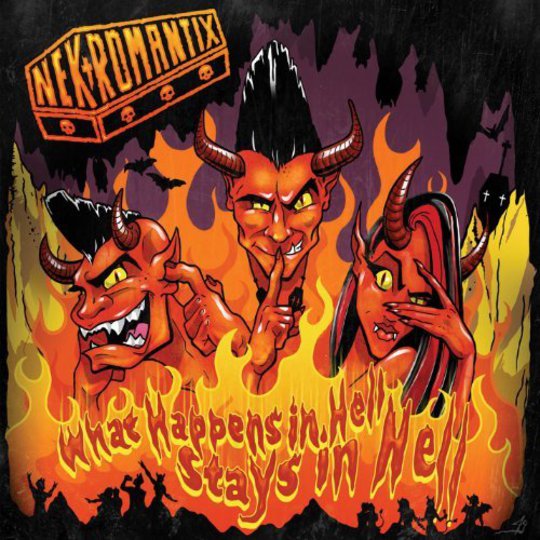 Never quite sleazy, unhinged, contaminated or corrosive enough to conjure psychobilly's hellacious setting, on What Happens In Hell, Stays in Hell Nekromantix have provided a clean shaven account of their beloved sub-genre when something a little more radical was needed to restore relevance to the antiquated sound of bluesy horror-punk.

You need only listen to the Dead Kennedy's 'California Über Alles' to know how effective it can be to pair halloween-y death rattle'n'roll with political content. Suddenly psychobilly's dumb puerility becomes absurd satire and rendered deliciously is the idea that the real boogeymen are usually the men hiding in plain sight - in polished boardrooms or as Jello Biafro had it, in public office. Liars' Sisterworld had several latter-day examples of this idea, satirising LA's perennially soulless by transforming the city into a surrealist netherworld. There's also Pissed Jeans, who by marrying ludicrously puffed-up doom-punk with mundane concerns like going bald, are able to paint a portrait of masculinity in hysterical, dread-ravaged crisis, or better yet express exactly how horror-ific it gets when your utterly bored with life - much more vividly (and entertainingly) than ten 'No Surprises' combined.

It's a wonder, then, that in this day and age the likes of Nekromantix plump for retreading that same old 'I-Was-A-Teenage-Werewolf' schtick for the zillionth time. The sonic tropes and trappings of psychobilly are so recognizable by now that lyrically a 'billy band can say more or less anything without fear of deviating from the milieu. But the opportunity is wasted on the Danish-American trio and the listener has to make do with tongue-and-cheek knockabout fare devoid of subtext and fuckin' proud of it. Though I suppose if your lead singer plays a coffin-shaped stand-up bass you can write songs about a having a bat (or indeed several) in your pants and still be totally rad.

Released on Hellcats records, home to all things mohawk-adorned and quaintly old fashioned in the field of punk, with the spunky abandon of a man half his age, the gnarled Kim Nekroman conducts a hi-octane grindhouse jolly with indomitable exuberance, the album oscillating between macabre pop-punk and vintage LA hardcore across its 13 tracks without stopping for breath once. As it often the case, the title track is the finest moment. Although crying out for some squalid Cramps-ian self-abasement, the switchblade riffery and RFTC drag-racing tempo makes for morbid mosh-gold. Meanwhile, a Cave-esque tale of death-by-fangy-femme, 'I Kissed A Ghoul' nails the creature-feature thing perfectly, while, all cheapjack whammy faints and hillbilly lilt, 'Bela Lugosis Star' is a frolic down Hollywood Boulevard with the titular horror titan riding shotgun. Last on the thumbs up list is 'Monsterbait' which begins with a lumbering hard rock intro before careening towards a devil-may-care finish, the boys laughing and hollering over speed-laced drums courtesy of their vampirish girl-drummer - the kohl-eyed Lux Nekroman.

For only surviving founding member Kim to still be going after 22 years and eight albums is both commendable and a little tragic, especially when the ailing sub-genre has long since been drained of its smart-dumb transgressive bite and seems even more juvenile than it did when the Danish born Californian first put pen to paper. It might have seemed illicit a decade ago (or two) but in 2011 for the combo to add nothing to the table banishes them to the realms of niche interest for aficionados.

By psychobilly's own modern standards it's serviceable, faithful, consistent and good for a groggy pogo, but in the greater scheme of things there's very little here to nourish the modern punk fan, especially at a time when the likes of Ice Age, Women and Fucked Up are starting to doing something really interesting with their three chord thrash.