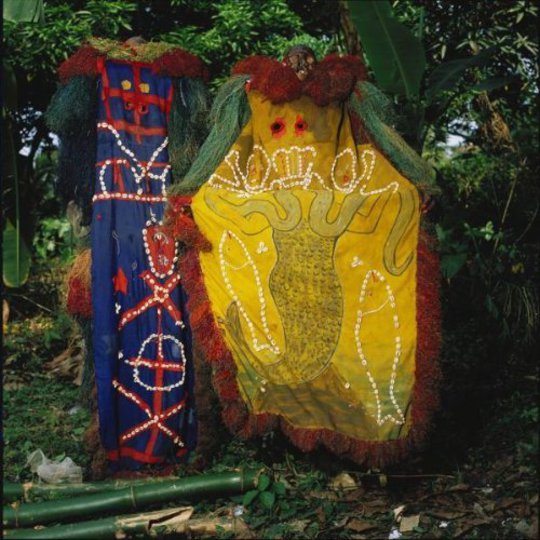 If the chill of Washed Out or Foster the People isn’t your summer fancy this year, Highlife’s African sizzle might be the sun kiss you need. Consisting of Doug Shaw of White Magic fame plus contributions from White Magic’s Mira Billote, Ariel Pink’s Tim Koh, Gang Gang Dance’s Jesse Lee on Best Bliss and previous associations with Animal Collective, those familiar with White Magic might be able to predict what’s coming: psychedelic frenzy, minus the electronic bits.

That’s not to say such predictability is a bad thing. This project is named after the Ghanaian genre that emerged during the nineteenth century, known for its joyously clean melodies. Some of you might already be aware of this Highlife since its rise in 2008 via Shaw’s own blogs. You’ll be happy then that ‘F Kenya RIP’, and ‘Burying Stones’ jet as joyous as ever. Whilst White Magic comparisons are unsurprisingly present, ‘Tuareg Dancehall’s lilting repeated guitar sounds just at home on White Magic’s ‘Through the Sun Door.’ But here Shaw captains vocally whilst Billote provides background harmonies instead – the layers of instruments project rays of dancing texture that were absent from the modest White Magic. Shaw isn’t afraid to vacate home comforts but still manages to play to his strengths.

Shaw is self-admittedly indebted to the guitar melodies of the highlife genre – his playing style travelling in a jetting progression through each track. Taking an excursion with his joyous voice, it’s a partnership that transforms this project into his own – avoiding over-indulgence despite its meticulous and complex arrangements.

The skittering percussions in ‘War Fair’ display the influence of a vacation in Trinidad last year, though clocking in at 46 seconds it's a fillery opener, while the farewell of ‘Wet Palm Trees’ lacks the oomph of the preceding tracks, despite being a suitable and calm closer. Taking in the background and the fact that Shaw isn’t African, this EP is perhaps a remembrance of his journey to Africa from an interesting outsider’s perspective that doesn’t turn into your typical bland holiday slideshow. It’s an adventure worth listening to.