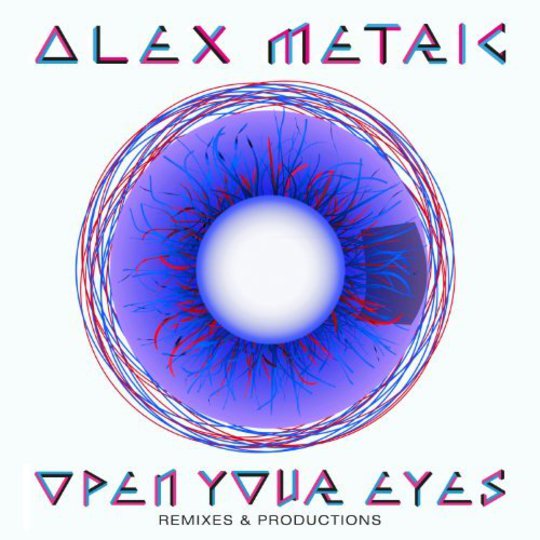 It's the middle of summer, and for The Yoof that means one big thing: plots hatched to hit the dance floors of the Balearics, and mainstream dance music dominating the charts as a sort of Ibiza-by-proxy for the older folks who never quite managed it (ie. me). The annual chart invasion of drum machines and repeated samples is usually heralded by the accompanying attempts of every other genre to 'get on trend' with remixes proving just how appealing they really can be to the Smirnoffed-up masses. Enter superstar DJs and, hot on their heels, the pretenders to the crown: in this case Alex Metric, sparkly dance producer and remixer extraordinaire, with his debut Open Your Eyes.

Yes, calling it a 'debut' proper, as though it consists solely of original material, might be being a bit charitable. There are only two original Metric songs here: the title track and album closer 'End Of The World'. The rest of the album is made up of what appears to be the definitive collection of Metric's remixes to date, along with the Metric-produced 'Black Sky' by Infadels and, er, another remix of 'Open Your Eyes' by Style Of Eye.

It's obviously difficult to judge things like lyrical quality or artistic integrity when it comes to remixes, primarily because all the heart and soul - or lack of it - has usually been invested in advance by someone else. In the worst cases, a remixer can come in and manage to completely mangle a song through the art of cut and paste; or, alternatively, barely touch the song and make everyone wonder why they bothered. Fortunately, Metric is neither kind of remixer, stamping enough of his own proclivities towards blips, squiggles and samples on songs like Phoenix's 'Lisztomania' and Bloc Party's 'One More Chance' to actually establish his own musical identity during proceedings, while never smothering the identity of the original song or artist.

There's a really good mix of remixed artists on offer here, too. From Niki & The Dove's 'Mother Protect' to Depeche Mode's 'Personal Jesus', via Gorillaz' 'Stylo' and Fenech-Soler's 'Lies', the songs compiled here would already be a masterclass in how to make a really good pop mix tape, even in original form. That's one key to why this album works where others like it often fail - Metric may be a dyed-in-the-wool dance producer, but you don't get everyone from the Beastie Boys to the newest pop songstrel lining up, songs in hand, asking to remix their work if you don't have a love of all genres, and that certainly comes across here.

All that, though, presents a dilemma. Because Metric is easily as good a straight-up producer as he is a remixer, it's not unnatural to want to see more of his original work present. 'End Of The World' in particular is an especially catchy and involving effort, Charli XCX's laissez-faire vocals bumping up against the vaguely Eighties instrumental stylings. Strangely, the title track appears not in original form, but instead as both a remix and an instrumental: a bit disappointing, especially considering the original's brilliant video has brought Metric to wider attention. If there's one thing to quibble about, it's the desire to see more original material - if only to demonstrate what brilliant pop Metric is capable of when not confined, even slightly, to another artist's vision.

It's a minor quibble though. On offer here is the pick of what is already a pretty good bunch of remixes. Odds are you've already heard a lot of these songs, but for anybody looking for either a good introduction to Alex Metric or a summary of what's good in pop in the twenty-first century, you could do a lot worse than this. In the end, the only big requirement of albums like this, whether you are a Yoof in Ibiza or a more discerning music fan, is to be fun to listen to - and Open Your Eyes is certainly that.