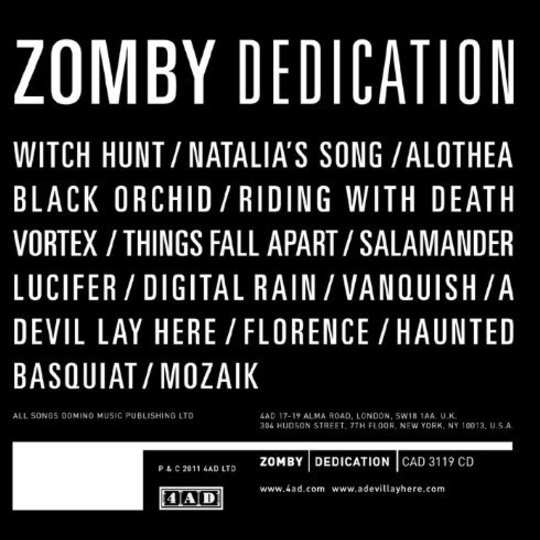 Where were you in '92? Where were you in '92? Where were you in '92? Nope, not a reference to Zomby's first album, proper, released back in '08. Well, not directly anyway. It's not particularly a reference to M.I.A. either, as much as the people that turned Arulpragasam's agitprop art into a unit-shifting science. But what of those people? Diplo, Rusko, Switch, Blaqstarr and so on. While it's unlikely that dubsteb and eski will be falling off the sides of a Tesco shelf-filler's trolley anytime soon, there's even less chance it'll specifically be an album by one of those torch-holders. Main reason being, and you can probably include Rusko's already forgotten O.M.G.! into this equation, they're not exactly album people. Zomby, with record number two, Dedication, proves two things: why he's different, and why he may well be one of dubstep's, and music's, brightest flames.

It's a curiousity of electronic music that so few big name DJs and producers appear capable of making (half-decent) full-blown long players. You're either one or the other, and it's a distinction that especially stifles the producer/DJ. So many take time out from being a record player or tweaker in favour of being a genuine Record Maker, yet so few have made the transition well. Don't cross the streams. It would be bad. But like Venkman, Zomby got fuzzy on the whole good-bad thing. And like all the genuine talents, the kind that make you dry-heave envy like it were an indigestible food substance, Zomby can just about do it all. Well, when he shows up.

So maybe Dedication is genuinely one for the fans. Something created, crafted, cared for, that doesn't rely on the conjoined talents of other people; something that will always be able to relied upon when, perhaps, the human being behind it, can't. And there's no denying the talent behind Zomby. The fact that Dedication is a complete and utter sea change from rave homage Where Were U in '92? is the most obvious signifier. The new album's black sleeve points to that change of tone. The sirens are (virtually) gone. The ecstasy-friendly melodies are gone. The temptation to drive a pimped XR3i to an empty car park at 3am is gone. '92 was ostensibly a album about parties, for parties. Dedication is something almost at polar opposites. At times, Dedication harbours a loner's intensity; a morose, dead-ended thoughtfulness and gnashing intent brewed and boiled up in bleak bedrooms and damp backstreets. Thirty-two seconds into the insect buzz of SALEM doppelgänger 'Witch Hunt', a pistol is cocked and three retaliatory shots are fired.

Some might already be desperate to name-check Burial at this point, but Dedication possesses little of Untrue's trippy glow or ethereal warmth. There are some warmer synth'd string snippets to be found ('Adagio For Lucifer', 'Resolve', 'Florence'), but Dedication essentially chooses to eschew Untrue's synth-heavy aesthetic and dubstep rhythmic foundation. In their place are sparse, bereft composition and constant mood-plotting and directional changes. And, more often than not, pretty simple house beats. It can be hard to sit still with Dedication or get mentally set with it. But that doesn't make it any less compelling. It makes the patchwork so intriguing that it's almost impossible to put the record down until each particular mood has been able to hit home some. Borrowing from and building on so many forms (dubstep, eskibeat, grime, house, trance, ambient) Zomby has successfully made the exploration of his own sick levels of creativity a neat trip for the listener, too.

The opening few tracks leave you under no illusions that Dedication is any kind of thematic piece. Following the more classical dubstep of 'Witch Hunt' comes 'Natalia's Song', the longest and most track-like track on the album. A clear nod to the brooding and seductive progressive house/trance that spilled out of New York, Holland and the UK in the late Nineties and early Noughties, it layers sampled female vocals over dulled-out beats and slivers of numb hi-hat. It has paper towel production value. But then you figure that might be the point. Don't let the emotion of the track be dulled by anything. So dull the rest and let the emotion of the vocal be clearly heard. Whatever. It's one of the tracks of the year. Then, 'Alothea'. To all intents and purposes, a deep house, post-club meditation that leads seamlessly into 'Black Orchid' AKA fucking chiptune euphoria.

The craziest thing is how seamless the mood switches are. 'Black Orchid' into 'Riding With Death' is the equivalent of thunderstorms and hail into quiet, peaceful dawn. But it works like there isn't a separation. It's a trick Zomby pulls at will and at regular intervals, but there's seldom an occasion where you feel jolted into position, like Zomby might be guilty of straitjacketing the listener into a state of ADHD. Sure, on this evidence, the maker of this record may well be chronically afflicted, but the slightly insane trip for everyone else is by turns frantic, engrossing and, mainly, ridiculous fun. Fun too is the inclusion of Panda Bear on 'Things Fall Apart'. Like Pantha Du Prince's Black Noise, it almost feels like greed to hear a member of Animal Collective on an album this strong. Unlike Black Noise's 'Stick To My Side', this is a collaboration that fits comfortably, Lennox's cyclical vocals melding to the bleepy maelstrom to good effect.

The dexterity of Dedication might be the thing that grabs the attention first and may well be the thing that takes the most time and effort to become used to. But the great magic of this record is that while acclimatisation to Zombyland is taking place, there's so much depth to explore, be it the bizarrely effective tonal shifts, the diversity of musical style, the sense of simplicity that, no doubt, veils immense complexity. Maybe Zomby missed that ATP show because he was perfecting this near-perfect record. Dedication. That's what you need.