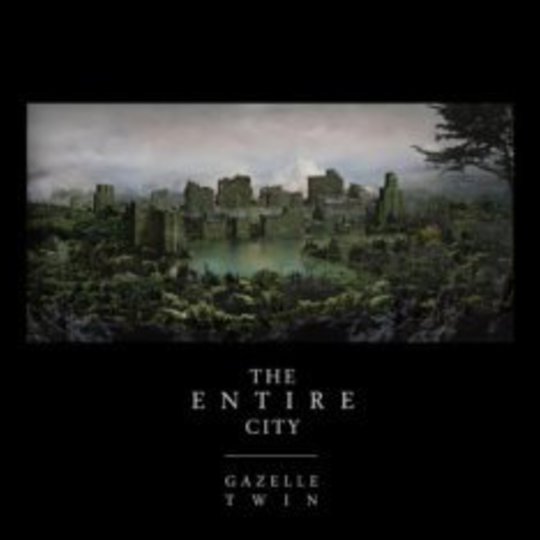 Elizabeth Walling used to be in a relatively unremarkable band playing relatively low-key shows alongside friends and acquaintances acquired during her relatively usual musical education. Indeed, in her own words, this was a woman who had few ambitions beyond being 'a sort of bog standard composer, really.' Fuck knows what happened next - these days she seems about as normal a prospect as Gandalf waving a staff at a viciously giggling Gok Wan in your aunt’s utility room. Such is the nature of Gazelle Twin, a warped reflection of Walling herself: she not only eschews, but actively discredits whatever flighty notions of Normal - normal dancers, singers, women, humans... - you might harbour, before reconstructing a relentlessly daft world of fantastically fucked-up, spectacular weirdness, as Gazelle Twin, entirely from scratch.

According to interviews, Walling goes about this by retreating into a shell she’s lumbered since her childhood as a human girl. That fear of self-expression is embodied by a discomfitingly elaborate on-stage persona and costume, originally inspired by Max Ernst’s shapeshifting Loplop creation. It also extends to the music of The Entire City. Insofar as any series of intentionally abstract and unintelligible words and noises could be said to 'address' a concrete idea, unsettlingly epic second single 'I Am Shell I Am Bone' does a fine job of addressing the shell tendency; not just in title, but the groaning thrum of synth, pulsing drum-shots and, above all, Walling’s distorted, barely perceptible vocal, constantly being tugged to and fro in an electrical fuzz - it sounds as if drawn from her throat, processed through a deteriorating hard drive and reproduced via the reanimated voice box of a dead ghost. Likewise, the bleak instrumental title track sets an enticingly nightmarish scene, building a dystopian musical landscape out of off-beat drums in 5/4 time, chased by a fleet of archaic horns - which’ll be eerily familiar to admirers of Hidden-era These New Puritans - eventually simmering in a gentle chorus of wildly ascending harmonies.

You could argue that the way Walling presents Gazelle Twin visually has little business propping up this album review. In most cases I’d agree: increased focus on the appearance and actions of ’our’ pop stars has led to a sort of uncomfortably intimate demystification, which risks turning this whole fan-artist deal slightly tits up, particularly when ostensible role models are unveiled as dull, over-sexualised drones manufactured beyond any semblance of significant human nuance. But that’s kinda the point here: what Walling’s mysterious, asexual outfit enhances - and what the forthcoming interactive version of this album will likely take to its twisted, logical conclusion - is the confusion inherent in humanity itself.

Unlike, say, Sasha Fierce - aka, Beyonce in fancy dress - or Lady Gaga, who for all intents and purposes appears to be ‘crafting’ an (exponentially unconvincing) persona as she goes, Walling uses her lack of overt personal association with Gazelle to make an unselfconscious psychological investment in her artistic ideas, which can at once be as visually playful as they are intensely thoughtful. Never slipping too far from accessibility, this gooey musical soul manifests itself in everything from the choral harmonies of swirling, Fever Ray-esque sunset haze 'Changelings,' to 'When I Was Otherwise's Hail to the Thief-inspired synth throb and military drum snatches, to 'Obelisk's naked cry of something that sounds like, but probably isn’t: “Where the fires burn in” - fragile, understated and frightfully beautiful, regardless. For all its wrong-footing attempts to reinvent and hide inside itself, The Entire City - while slippery as a fish out of water, by all accounts - is crystal clear of ambition and concept. It’d probably be better for everyone if we could turn ourselves inside-out from time to time, eh.