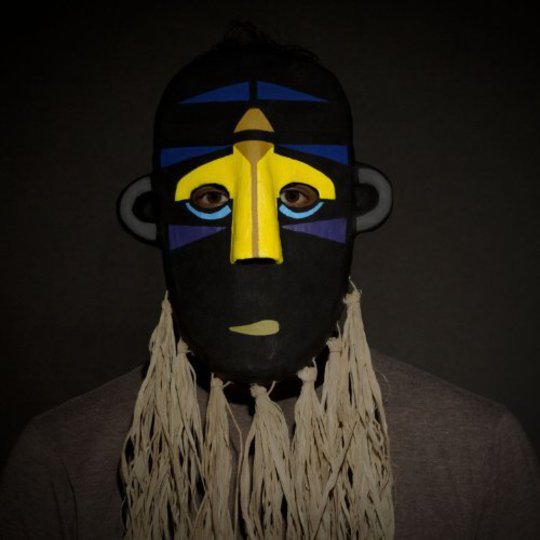 Above this chunk of text, you will see the soon-to-be iconic SBTRKT mask, behind which lies an anonymous wizard of a producer. He has been brewing remixes under the radar for a while now, and made his debut on the Young Turks label last year with the release of the Step In Shadows EP, a small collection of electronic instrumental tracks that caught Pitchfork’s eagle eye. Since then, he has been slaving away to create his self-titled debut album, 'one of the finest records the dubstep genre has produced so far' - so sayeth Steve Lamacq. And I'm in agreement with Steve here.

Citing De La Soul and Run DMC as influences, SBTRKT first learnt about dance music from his 18-year-old DJ cousin when he was 11. His record cleverly draws upon a range of influences, from the formative sounds of Massive Attack to the Chicago house stylings of opening track ‘Heatwave’, to the broken beats of ‘Right Thing To Do’ - clearly an element influenced by his old stomping ground, Plastic People. In particular, there’s a strong theme of UK funky throughout the album, exemplified by the gorgeous Roses Gabor’s smoky-sultry vocals on ‘Pharoahs’. SBTRKT creates an intricate tapestry of sonic elements that fluently weave in and out of each other. The tracks are sewn together effortlessly; they tell a tale, from the ballad-esque ‘Trials of the Past’ (“So I’ve got to sit up, sit up, up, up / For my heart to come down, down, down”) to the self-conscious reflections of ‘Never Never’ (“It’s complicated when you gravitate towards yourself; / On the other hand it’s hard to talk to anyone else”).

The delicate twinkling thumb keys and warm synth pads of ‘Hold On’ establish an intimate instrumental foundation, to which Sampha adds “You’re giving me the coldest stare, / Like you don’t even know I’m here, / Why don’t we turn the leaf?” It’s a sort of soul-dub track, this one, yet has an almost punky vibe, proving that contemporary production can be impactful without constantly referencing the obvious harsh beats of D&B and Jungle. What follows, though, is ‘Wildfire’, in which the vocals of Yukimi Nagano retort “Your innocence; who’s brave? / Drowning in; would you save me? / It’s a crime if you don’t, / You’ll despair by the throat”; the lyrics float ablove a wobbly bass line and dizzy sirens, unable to avoid the, well, unavoidable dubstep movement.

Both live and on record, Sampha’s luscious, velveteen vocals contrast with the dewy electronic instrumentation produced by SBTRKT. On stage, they take total control of the forever-evolving layers of sound. The pair surround themselves with a fort of synthesizers, keyboards and computers. SBTRKT violently attacks the drum kit, ricocheting heady beats off the walls. Sampha flits from one techy piece of equipment to another, synth helicopter-like reverberations skipping around the room, from one eardrum to another.

Representing UK production at its best, SBTRKT’s self-titled album is playful yet gritty. Apols for getting all Cher Lloyd on yer ass but, as she would say, it’s got bare swagga. SERIOUSLY, this record is fucking good, flawless, almost, and hard to stop listening to. What SBTRKT has done is take all the best elements of the past two decades worth of dance sub-genres and used these ingredients to make a 11-course popping candy meal of an electro album. The intricacies of its production, paired with soulful vocal melodies, are enough to propel the bubbling UK underground electronic movement into the mainstream periphery. SBTRKT has shoved his way to the front of the audience and now sits side stage, ready step out of the shadows and jump into the limelight.