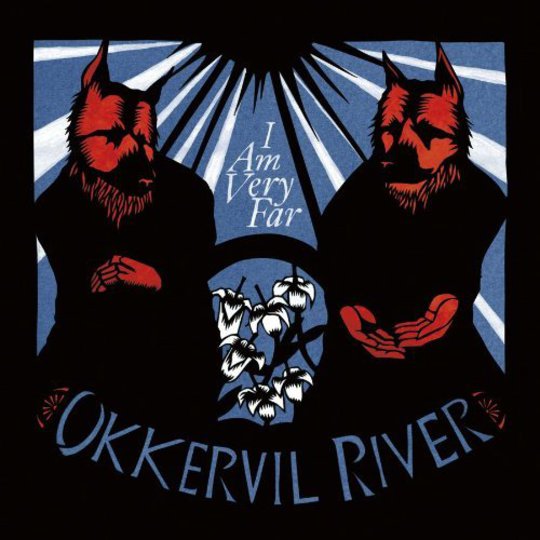 Ah, indie rock! Sure, you read more books than rock‘n’roll, get invited to more parties than the blues, take better drugs than pop. But tell me, do: why wear all that self pity on your sleeve, indie rock? If only you were to harvest more records like I Am Very Far, indie rock, you and I would surely still be cresting those giddy, teenage waves of yore! I Am Very Far, wherein Will Sheff calls upon the gods of fiction, poetry and theatre to deliver a dual sonic and lyrical masterstroke, poised to elegantly blow your doors from their hinges, indie rock! Wherein Austin’s Okkervil River suavely obliterate trends towards navel gazing cynicism and meretricious, self pitying one-upmanship - for shame, indie rock! Wherein percussion and orchestration glide majestically, above and beyond mere backdrop, evoking in themselves a wonderful lyricism, indie rock! Think this sounds pretentious? It is! It’s brilliant! And lord, the theatrics! Ramped up to proportions so shamelessly Big, so superlatively humungous, as to render cries of ’Arcade Fire-esque!’ and ’reminiscent of early Springsteen!’ quite, monstrously inadequate.

Esteemed syntactic gymnast Will Sheff inches further into the spotlight with every release; even last LP The Stand Ins - a plateful of The Stage Names’ leftovers - provided an unlikely rallying cry in ‘Lost Coastlines’. But while that song was undoubtedly exceptional, it was arguably the high water mark of a record somewhat lacking in focus. I Am Very Far - equally sprawling, but in an altogether more expansive sense - sees Sheff’s own production mark a sonic evolution every bit as drastic as that heard from Don’t Fall In Love With Everyone You See to Black Sheep Boy, or Black Sheep Boy to The Stage Names. Which is to say, it is, from whatever way you look at it, an absolute jeffing Godzilla of a thing.

'The Valley' lays out an opening scene as thrillingly ambitious is it is familiar. Built around a simple, minor pentatonic guitar riff peppered with an intense, spaghetti-western salvo of snare thwhacks and deathly clouds of synth, it is comical, melodramatic, bold, pretentious, sublimely enrapturing and musically akin to the blast of hot air as one steps out of an airport to the desert.

Watch the Sun / Switching in the sky / Off and on

Where our friend stands bleeding / On a late-summer lawn

Electrically it pulses with the 'chaotic, powerful energy' bestowed upon Sheff during his time collaborating with, and ultimately befriending, Roky Erickson. Showcasing Sheff’s distinctive, bookish nous, ’The Valley’ indirectly alludes to the closest thing you’ll find to an overarching theme on the record: that being that we, you and I, are hurtling towards some imminent tragedy, the precise dimensions of which are unknown.

Just as impressive are the less in-your-face passages: each dormant scene positively bristles with sharp bursts of life. Underpinned by eavesdropping walls and whispering shadows, ’Piratess’ is a svelte rejuvenation of ’Murderess’ - a rough hewn, lost gem taken from Sham Wedding/Hoax Funeral, the band’s 2004 split EP with Shearwater - that calmly ignites in mushroom clouds of mistrust and betrayal. Indeed, like The Stage Names’ compendium of literate first person biographies, I Am Very Far finds Sheff playing good cop/bad cop throughout, at once brutal and sympathetic to his characters. Snaking multi-POV narratives are par for the course, and even oddly moving Kaputt-era Destroyer groove ’Your Past Life as a Blast’ - 'the most songwriterly song' on the record - while a swooningly delightful emotional snapshot, plays rather like a scratched DVD; a collage of intriguing but profoundly fractured life stories.

I’m asking, ‘Do you want to come and make me shiver?’

I’m thinking, Squeeze my arm and feel it pull away / Like someday, baby, when we differ.

Again, the impression is that, unlike the whimsical musings of 'winding' indie folk records, or blunt-witted grunts of Big Rock, Sheff’s words are certainly working towards some greater end, albeit one perhaps best known to himself; ’Your Past Life as a Blast’ and ’White Shadow Waltz’ flaunt an almost (yes) Lynchian knack for eliding key details, often sending the timbers all aquiver entirely out of the blue.

Though tempered by fleeting interludes of tranquility (’Hanging from a Hit’s ballroom waltz update on Black Sheep Boy’s ’A King and a Queen’ offers a particularly elegant mid-album sedative) the whiplashed frenzy distinguishing I Am Very Far from its predecessors is best served by the aforementioned Bigness. Employing a huge backing band to stirring effect, ’Rider’ (a knees up jaunt akin to The Rolling Stones’ ’Rocks Off’, resplendent in some wholly unexpected Brian May guitar stylings [but actually not rubbish]) and ’Wake and Be Fine’ careen along with such breakneck bombast you’ll scarcely be able to keep pace with their biting imagery without a lyric booklet to hand. The latter tells of a society on edge as it tears itself apart at the seams, exhibiting four stark first-person narratives of songwriting bent more Byronic than ironic, outplayed only by the album’s centrepiece and pinnacle ’We Need a Myth’. Here, Sheff’s despairing cries could be invoking anything from a Brothers Grimm fairytale to the second coming. Either way, underlined by triumphant flashes of violin zigzagging to ground level and stately grand piano, it sets the stage for the album’s ponderings on decadence and redemption to arrive at a climax of singular orchestral magnificence.

Overall, I Am Very Far is to these ears a triumph for what some will (wrongly) rebuke as pretension: insightful literary extravagance and melodrama at a time when taking pride in ignorance and indifference seems to be the cultural norm. Both a likely contender for the finest indie rock record of the year, then, and a breathtakingly chaotic venture far beyond that genre’s remit.