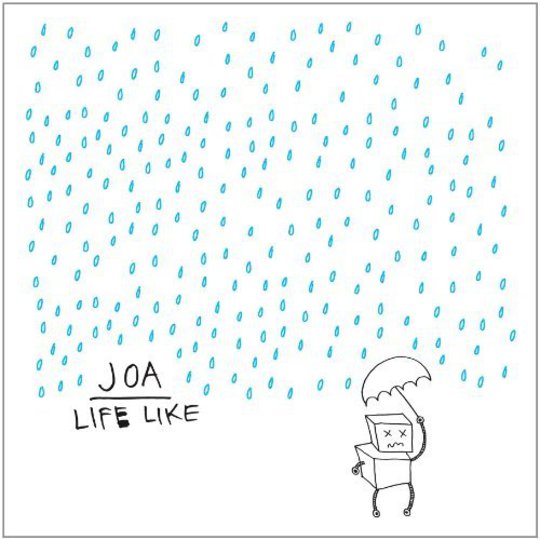 As the sole full time member of Joan Of Arc, Tim Kinsella doesn’t make life easy for himself. Despite his deft skills as a songwriter and lyricist, he sometimes seems too willing to experiment and obscure his work behind concepts that don’t always come across as well as intended. On the one hand, this does mean that as a band, Joan Of Arc rarely repeats itself, an admirable quality, and one that can provide rewarding results for the long-term fan. On the other hand, it does mean that some records sound like a sprawling impenetrable mess, rather than the high concept work that was intended. Life Like, the group’s fifteenth album, eschews any sort of avant-garde tendencies and instead opts for actual songs. The result is a focused and surprisingly restraint affair, words which are rarely associated with a Joan Of Arc record.

Life Like sees the band strip down to its core of bass, drums and guitars. Gone are the electronic flourishes, the sampling and studio experimentation of previous outings; the Joan Of Arc of Life Like are a taut rock outfit, with no time for messing around. This streamlined approach is down as much to choice as necessity. Raising funds through a Kickstarter campaign, the group only had five days to record. With a limited budget, and limited time, sticking to the script is vital. That’s not to say that all the band's calling cards are gone. Tim Kinsella’s voice still operates in that weird area somewhere between a warble and a screech. Angular, spidery guitar parts in awkward tunings come courtesy of Victor Villarreal, aka one of the best guitarists of the last 20 years. For some, the news that Villarreal appears on the record is reason enough to like Life Like. His return to music after ten years will no doubt have some Kinsella fan boys shitting their pants. Luckily, he doesn’t disappoint.

The most out there moment on the album comes right at the beginning, with opener ‘I Saw the Messed Binds of My Generation’, a mostly instrumental guitar workout that clocks in at just under ten minutes. It’s also the only song title to feature any clumsy punning, another Kinsella trademark. Elsewhere, ‘Like Minded’ features the kind of syncopated bass & drums, coupled with delicate guitar picking that Chicago bands seem to do so well, whilst ‘Deep State’ features some guitar tapping that seems at once to outshine both John Fahey and Ian Williams. If anything, Life Like is Villarreal’s album. His guitar work provides the flourishes and intricacies that underpin every moment of the album, that pull the songs together and accentuate every moment.

Joan Of Arc, and the various related bands are blessed with the great advantage of being a cult band. Regardless of the quality of their output, there’ll always been a portion of their fan base that will appreciate whatever their next move may be. Tim Kinsella could fart into a microphone and at least one person would claim it to be the best thing ever. So where does that leave Life Like? It’s a strong record, not their best, but better then the last one, easier going then the one previous to that. If anything, it’s closer in feel to the Owls' self titled album then anything in the Joan Of Arc back catalogue. The lack of any real experimentation does mean that it fails to match the very best of the Joan Of Arc, but the consistency and restraint on display puts Life Like in a lot, lot better light then some of the group’s hugely varied output.