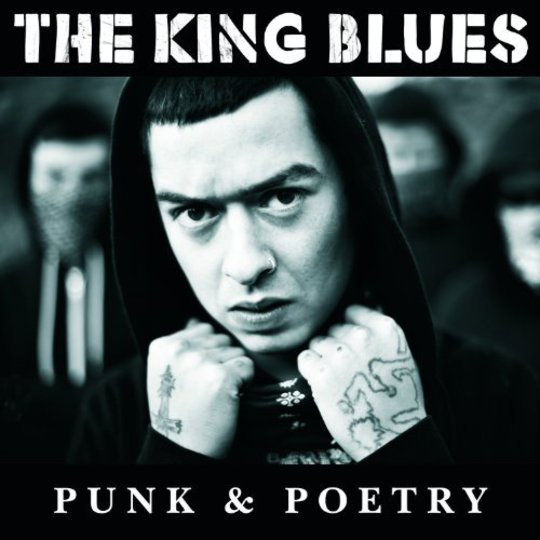 Rightwing governments and protest music go together like beans and toast. So, it was somewhat inevitable that the ConDem government would soon spawn a response from musical circles, especially as it sets about dismantling the institutions of British society in the name of 'austerity measures'. And it's unsurprising that long time political activists and agit-punks King Blues' third album, Punk and Poetry travels down the path that many an earnest musician before them has carried a placard upon.

The thing is, though, that it's actually bloody great. Hackney's finest have not only made a record that encapsulates the sense of frustration, disempowerment and incredulity that permeates so many living rooms, pubs and workplaces in the UK, but which is also a damn good album in its own right.

Musically, it's eclectic, coupling the Blues' familiar ska-punk with folk, drum and bass and even some Scroobius Pip-style poetry skits: the latter includes the furiously righteous 'Shooting Fascists', more of which later. That's not to say that they've diluted their ska roots, though: in fact, 'Set The World On Fire' and 'Headbutt' are two of the finest pop-ska tunes I've heard since Rancid were in their prime.

The music ain't the be-all and end-all, however. Lead singer Itch has always been one to wear his heart on his sleeve, but unafraid to wield a wicked wit. Punk and Poetry showcases both of those traits to full effect. His lyrics range from outraged fury to strikingly beautiful imagery, all infused with a very British observational humour and sensibility. 'The Future's Not What It Used To Be', 'Five Bottles of Shampoo', 'Fucking Angry' are all great examples of this: however, Itch's finest moment is the aforementioned 'Shooting Fascists'. A simple anti-EDL ukelele tune that end on the simple refrain, "Your granddad didn't vote for fascists - he shot 'em", it's the most poignant, quietly outraged and effective moment on the entire album.

Admittedly, Punk and Poetry isn't perfect. The politics are occasionally a bit student soapbox, and the subjects railed against seem a bit random - as if the Blues have taken inspiration from whatever's on the front of the Daily Mail that morning. The sentiments also come across as clumsy from time to time, not least the occasional diversion into 'troo luv will save the wurld' territory.

That mawkishness is all part of the album's charm, though. For all its awkwardness, for all its outrage in major chords, it's ultimately hopeful. Sure, there are some bum notes, but it's music with passion. It makes you want to DO something, and that is what a real protest album is really about.