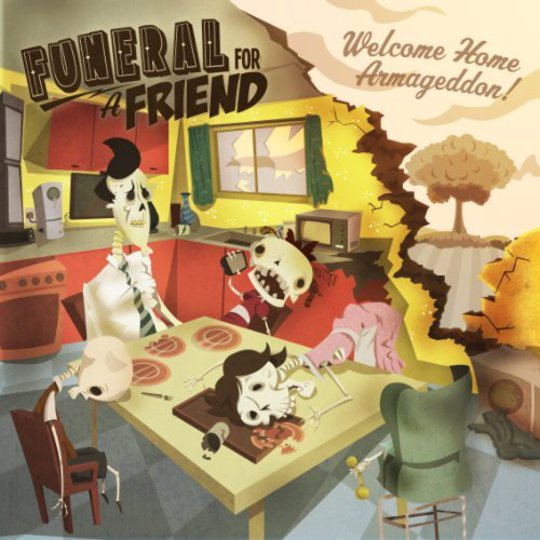 You have to feel a bit sorry for Funeral For A Friend. Despite being inappropriately hailed by some as the 'new Nirvana' upon the release of 2003’s critically-acclaimed debut Casually Dressed and Deep in Conversation, the Bridgend quintet has never quite mustered the commercial appeal which seems to surround countryfolk Bullet For My Valentine and Lostprophets. Whether this is down to the abandonment of (whisper it) post-hardcore leanings on subsequent releases or simply due to the fickleness of the music business in general remains unclear but, nonetheless, here they return once more with fifth studio album, Welcome Home Armageddon.

Considering the confounding personnel changes that have affected FFAF in recent years (bassist leaves, is replaced, guitarist leaves, new bassist replaces guitarist, another new bassist joins), it is somewhat surprising that Welcome Home Armageddon is the closest the band has come to capturing not only the sound, but also the unadulterated enthusiasm that accompanied their early work. Indeed, memories of early noughties teen-targeted rock acts initially come to mind as 44-second intro ‘This Side of Brightness’ lures the listener in with its slow, soothing guitar picking before presumably causing mass heart attacks when the relentless pace of the punk-infused ‘Old Hymns’ kicks in. Unfortunately, modern times have seen the majority of consumers discovering the length of each track before listening to an album, courtesy of their surprise-ruining, cardiac-arrest reducing friend iTunes, but it’s a curiously endearing nod to the past nonetheless.

In spite of its somewhat hackneyed opening, Welcome Home Armageddon proceeds with an almost unstoppable vigour and it certainly feels as if a few boogies to the tune of the line-up shuffle have helped songwriting efforts immeasurably. ‘Sixteen’s spiralling guitar melodies are a fine example of a band reborn, as instruments rise and fall with a precise yet delicate grace, complimenting the feelings of both optimism and despair implied by the title. Indeed, Welcome Home Armageddon feels like the work of a much younger band, not least because of Matt Davies-Kreye’s occasional penchant for well-rhymed but ultimately meaningless lyrical contributions. The mere mention of the title ‘Owls (Are Watching)’ is enough to send shivers down the spine, but when accompanied with lines like “open windows above the sill / flowers bloom to make the air less chill”, we are forced to question not only the emotional, but also the scientific foundations upon which this album’s lyrical content is built.

Still, only 14year-olds who themselves claim to have experienced the grisly phenomenon of a “bleeding heart” pay close attention to such lyrics, right? Fortunately, Welcome Home Armageddon is one of the most instrumentally and compositionally impressive albums Funeral For A Friend have unleashed thus far; ‘Aftertaste’ is reminiscent of Deftones’ heavier seven-string moments while ‘Broken Foundation’ finally gives in to temptation as Kris Coombs-Roberts lets rip with a (gasp) Iron Maiden-inspired guitar solo. On the other end of the sonic spectrum, ‘Man Alive’s bass-led themes demonstrate the solid foundation new bassist Richard Boucher provides for the band, his dynamic and tasteful playing style creating far more of an imprint in the mix than previous low-end merchants.

While recent albums may have displayed the band’s versatility, Welcome Home Armageddon’s scream-laden, speed-driven approach is going to make a lot of Casually Dressed fans very, very happy; the likes of ‘Spinning Over The Island’ and ‘Front Row Seats to the End of the World’ are undeniably in the vein of earlier work and, as such, this latest release could be heralded as the much sought-after ‘return to form’. However, for those (apparently few) who appreciate both recent and old material, Armageddon may feel like a confident leap forward accompanied by a hesitant step back: introspective ballads like Memory and Humanity’s show-stopping highlight, ‘Charlie Don’t Surf’, are noticeably absent, instead replaced with slower tempo, but no less fierce, anthems such as ‘Medicated’.

Yet that’s not the position Welcome Home Armageddon attempts to occupy in the Funeral For A Friend canon; this is a fast-tempo, punk and metal-tinged homage to days gone by and those yet to come and, as a result, may well be the band’s best effort since their much-lauded debut.