The King of Limbs 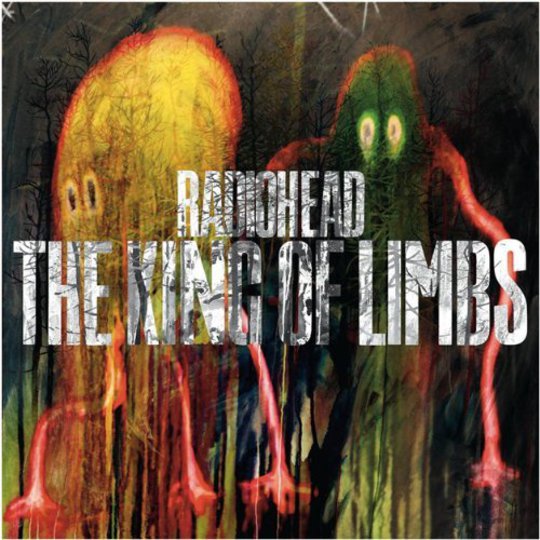 Ahoy-hoy! So the idea was for a 'proper' review of this record after we rushed out this committee job. But a month later, looking back over what I wrote, I still basically agree with it, and I think it'd be denigrating the efforts of my co-writers to simply re-write this into a longer version of my own thoughts on The King of Limbs. Also it saves me some work. And you know, we should be saving ourself for TKOL2. A mark has been added as the average of the scores the contributors gave the album, though I didn't actually publish that at the time.

Calm down, calm down: it's not a real review. That's because here at DiS, we don't play by nobody's rules. And when that bastard Yorke forces - FORCES! - the world's media to bash off reviews of Radiohead's eighth album The King of Limbs at such dizzying speed that virtually every analysis I've clocked of it so far features the reviewer admitting they haven't really made up their mind yet, then this one plucky website refuses to play ball. Everybody else should be ashamed. We should be sent money and medals and fine wines. It is definitely, definitely not to do with fear of a kneejerk analysis getting written out of history. Definitely not.

Anyway, here are a selection of short reactions to The King of Limbs from members of the DiS writing corps. (If you're from Metacritic and reading this, don't panic, we'll have a review around the physical release.)

As with some of their back catalogue, Radiohead's latest needs a certain amount of re-orientation upon alighting. A cursory listen reveals little but a motorik highways and disjointed digital echoes. A second listen intercepts the choir-grade swells pumped throughout and the subtle lift of mood from abstraction to a studied electronic gospel. The third finally filters out your aloof electronica references and focuses on the elements which make it defiantly Radiohead - the delicate but sturdy skeletal guitar lines, the slurred undulations of Yorke's keening and the ritual snares ricocheting in the background. And suddenly you rest easy - after initial alienation by subtlety - realising laid-back for Radiohead is often exhilaratingly eclectic.

The King of Limbs definitely represents new ground for Radiohead in its cohesiveness and its unnerving, stifling mood. For these reasons alone, it is a good album. Problem is, though, all has gone before means that something merely ‘good’ represents failure for Radiohead. I’m six listens in and it’s yet to fully reveal the intangible wonders of a Radiohead record, but fingers crossed it’s just a matter of time.

The King of Limbs shares its genealogy as much with The Eraser as it does with In Rainbows, and as a result it often feels as if Yorke is the architect here. The word ‘grooves’ that’s been bandied about is of course owing to those off-kilter beats – the very same that make it sound as if Kieran Hebden or Steven Ellison should get a writing credit. It’s this rhythmic impetus that creates the space in which Yorke can paint his melodies, or Greenwood add his subtle orchestral teases (not least the stunning brass touches on ‘Bloom’ and ‘Codex’). It’s a hypnotic, often beautiful record, but – our laughably overinflated expectations aside – will it ever develop into anything more?

This one will finally split the fans: there’s no compromise, no tilt to the past. Doused in skittering, fractured electronica; sub-bass and jazzy drumming, this is a record about texture, tone and rhythm; yet possessing melodies of ethereal seductiveness and fragments of sheer beauty. There’s a fascinating clash between jazz and electronica in the depths of the grooves, a tussle neither truly wins but both leave satisfied. As for claims that Radiohead remain a conventional rock band, The King of Limbs sneaks behind and exquisitely slits their throats. They are somewhere else now. Their best record in a decade: stunning.

So it's great, obviously. They're a wonderful band. Perhaps the most widely accepted Wonderful Band of our time; I certainly don't know many Radiohead dissenters. That near-blanket consensus can be a dangerous and stultifying thing, but it's undercut in this case by the rare joy of coming to a record with the minimum of pre-listening hype, words that will inform how you hear the music. The week-long trail before release (four days, in fact, since someone at XL obviously realised about two thirds less people use on Twitter et al on a Saturday) meant no-one got to write the narrative of the record before the majority had heard it. From the brief glimpses I've stolen at statuses and blogposts the dominant reaction has been to mention Afrobeat. Phil Selway’s incredible restless drumming and the cleanly plucked cyclical guitar figures in 'Morning Mr Magpie' make it an obvious touchstone. I hear less afrobeat and more bands overtly influenced by it. There's a High Places-like flinch of a sample driving 'Bloom', and clean Foals-esque guitar doodles punctuating 'Separator'. My favourite thing about The King Of Limbs is the sense that Radiohead are ready to make disturbing sounds again after the relatively safe hand played on In Rainbows. The best example is the appropriately titled 'Feral', but there are also unnerving synthy sweeps on loan from 'Idioteque' shimmying through 'Morning Mr Magpie'. It’s not all gold, 'Give Up The Ghost' is an unwanted return to their listless gloomy side and 'Codex' drags. There's also a nagging sense that they're mostly operating in second gear, but Radiohead earned the right to do that a long time ago.

Bereft of helpful interviews, press releases or lead time in which to contextualise The King of Limbs, a lot of the snap responses to Radiohead’s eighth album have been characterised by the same studied urbanity that met Kid A and In Rainbows. ‘It’ll take more than that to surprise ME, Thom’, chirrup the people who Thom surprised last Monday. To boil it down to simple facts, The King of Limbs is both Radiohead’s danciest record and their most obtuse. I’m enjoying it as a mood piece, an adventure in groove and texture, though as yet ‘Feral’ and ‘Codex’ are proving the only earworms. I suspect people will only truly get their heads around it when the next record turns up: the very act of being a new Radiohead album means TKOL will be analysed as if it were a grand artistic statement, but I suspect it is intended as a low key affair, and that’s how it’ll sit in their back catalogue, with a more melodic outing next time. I am not complaining, though.

Gone is the sumptuous orchestration and bombast of In Rainbows, in favour of Amnesiac-era glitches and sultry musings on humanity. Amnesiac was never my favourite, but this may well prove to be Radiohead’s most accessible album, mostly because for once it sounds roughly the same as The Great Public’s idea of what Radiohead sound like, especially on ‘Separator’ and the stunning ‘Feral’. I’m slightly worried though, because between the subtle rhythms and the ‘less is more’ approach to everything else, this could end up being Radiohead’s sex album. Wrong. Also: Thom dance as an Olympic sport. Let’s make that happen.

King of Limbs sounds gorgeous and atmospheric, that much seems beyond question. This album seems purposefully designed to be listened to on quality headphones as you walk through the settling dusk. What seems more questionable however is whether any of the individual songs will stack up favourably when put in the context of Radiohead’s exceptional back catalogue. Hearing them played live alongside established Radiohead classics is going to be very telling indeed.

My flatmate and I have a long-running argument over whether Radiohead dropped the ball with In Rainbows or not, and though I don’t believe they did, I can see where he’s coming from. It’s not an album I’ve returned to with the same fervour as their earlier work, but as this extremely Radiohead-centric weekend has demonstrated, their back catalogue is so uniformly strong and so uniquely their own that to chastise something for not being quite on that level feels a bit unfair. Is The King of Limbs on the same level? Does it have that special feeling of a Radiohead album? I say yes. Impenetrable at times, both unsettling (‘Feral’, ‘Morning Mr Magpie’) and wonderfully, deeply serene (‘Lotus Flower’, ‘Codex’), it is subtle, detailed and rich – a little slight, perhaps, but we’ll see what happens there. (And even if nothing does, that’s fine too).

Radiohead are probably the best band the UK has ever produced, aren’t they? Sure, The Beatles had their moments, but they would have been much better if they’d traded Paul in for a modular synthesiser, and as-yet Thom hasn’t made us sit through anything as insufferable as 'Imagine'. King Of Limbs is no change of direction for Radiohead, but right now they’re probably in the best phase of their career. Let’s leave it a little while before trying to reinvent the wheel again, OK lads? This current design is working perfectly. More of this please. Lovely.

Just as Kid A and Amnesiac owe a considerable debt to the early works of Autechre, The King of Limbs reappropriates the frentic shuffle of Flying Lotus and filters it through years of collected influences to create something approaching different. No mistake, it will not be remembered as a classic, but it does show imagination, intrigue and a stubbornness many have come to expect from the 'Head.