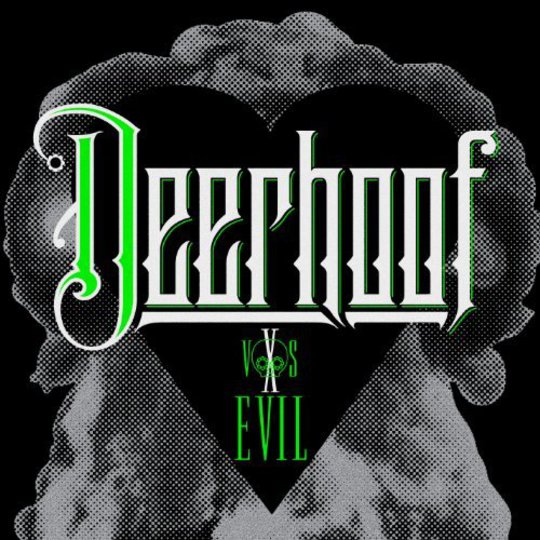 Satomi Matsuzaki sounds like a child absent-mindedly singing made-up songs in the back seat on a long car journey. I bet she pissed her parents right off. To anyone familiar with Deerhoof it’s easy to forget quite how wacky their primary singer comes off, and vocals tend to make or break music to new listeners more than anyone would care to admit. You don’t often hear people whinge about annoying drums or praise emotive bass playing.

Some find Matsuzaki unworkably cutesy, but she undeniably lightens what would otherwise be impenetrably complex math rock, trenchantly noisy punk, worthy guitar hero workouts or schizoid idea-overload doodles. You couldn’t imagine Deerhoof being anywhere near as effective as an instrumental band, or with any other singer. They’re a band bound by the juxtaposition of multifaceted music and her simple, limited voice.

On this, their eleventh album in 14 years, Deerhoof combine a dense mix of the disparate styles and sounds they’ve explored previously. ‘Super Duper Rescue Heads !’ Is not so much kitchen sink as every cleaning appliance in a small borough colliding. A beautiful mess of dump-sourced drums, twinkling keyboards and super-condensed scratched guitars. Each of the last four Deerhoof records has had a clear standout song, this is Deerhoof Vs. Evil’s

One thing largely absent from this record, as it was on predecessor Offend Maggie, is overt dicking around. There's no ‘Dog On The Sidewalk’ here and no-one's missing him. Instead there’s an ever-increasing sphere of influence at work, from the Krauty momentum of ‘Secret Mobilization’ with its urgent, constant bell, and the Black Dice-like synth squelch upon which ‘The Merry Barracks’ is built.

Given the virtuosic ability of Greg Saunier, John Dieterich, Ed Rodriguez and Matsuzaki it's surprising how little of their work is sternly serious. Any moment of portentous noodling is undercut by not only Matsuzaki’s voice but also the band’s tremendous restlessness. It's hard to think of one song of theirs that follows a conventional verse / chorus / verse structure, they typically they play around with one idea for a bit then move haphazardly into something else.

On ‘The Merry Barracks’ Matsuzaki appears from nowhere, sounding a little spooked after Saunier’s opening salvo: “Hello, hello, hello / hello, hello, hello / atomic bombs are going to explode”. She ruins the uneasily grooving mood a little. By the time she’s acclimatised it does the most unexpected thing for a Deerhoof song – it repeats a section.

The band’s impatience makes them simultaneously exceptionally exciting and somewhat hit and miss. It also serves to expose lack of imagination on the rare occasions it turns up. Closer ‘Almost Everyone, Almost Always’ is a bit of a drag, despite its dreamy final section. ‘No One Asked To Dance’ is a slightly unconvincing pastiche of... What? Spanish classical guitar? Nordic nursery rhyme? Even their experiments are wide in scope and difficult to define, which is what makes them so endearing.

There’s a slight Animal Collective tinge to Deerhoof Vs. Evil, an ear for unexpected traditional sounds sequenced in a modern way. Like that band it’s difficult to be anything other than pro-Deerhoof. Whether you enjoy the finished product or not, (and I really struggle with Animal Collective) there’s a laudable dedication to trying to make music in a new way.

Deerhoof are a band of bold moves, clear talent and admirable restlessness. Matsuzaki’s sometimes misleadingly cute voice is what makes them obviously lovable, but what bleeds from the music as a whole is enjoyment; the fun of being in a unique, adventurous band and making songs for the sake of themselves. If familiarity breeds contempt, regularity breeds complacency, and Deerhoof’s prodigiously consistent output should not overshadow how precious they are.