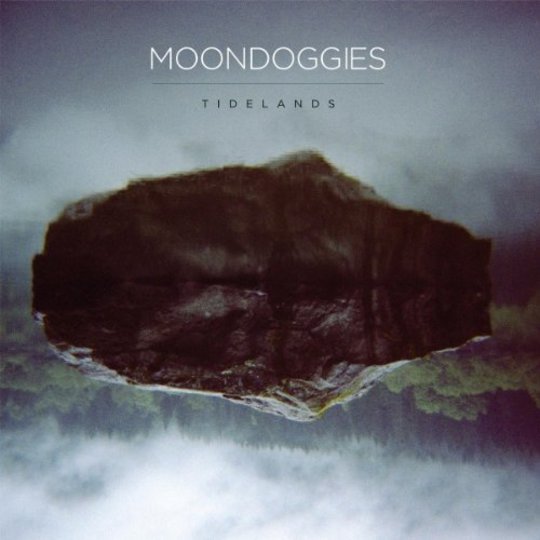 I'd like to ignore the obvious stumbling block and get straight to the songs, but I can't get over The Moondoggies' name. There's something puerile about it, or something filthy. Or maybe both. Seeking enlightenment, I looked up 'moondoggie' on urbandictionary.com, and learnt that to moondoggie is 'the act of spreading organic peanut butter infused with human breastmilk around one's anus'. Alright then. I looked forward to the lyrics.

Sadly, there's no kink to be found here – Tidelands is straightforward Americana, conventional from the get-go. After 2008's Don't Be A Stranger, Tidelands is the second album from the Seattle quartet, delivering another expanse of bluesy beardy-rock in the vein of Creedence Clearwater Revival and The Band. Opener 'It's a Shame, it's a Pity' chugs along winsomely enough – a bunch of hoarse complaints delivered against a brisk beat, but, by the time singer Kevin Murphy reaches his closing epiphany, “It's just a lie, it's just a lie” (referring, I'd gathered, to freedom), I'd wondered if I'd already got the measure of this melancholy band.

By title track 'Tidelands', I knew what was up. While evocative – I could imagine it providing cosy company somewhere bleak and watery – there are many other albums that do this better. Tidelands, languishing in a swamp of dreary minor chord progressions, sinks into comparative mediocrity.

I hoped for a hypnotic harmony to shine out over one of the gloomy chord sequences, since elsewhere, The Moondoggies are likened to Fleet Foxes and their ilk. But even when Murphy stops one of his plaintive grizzles (of which there are many) to make way for something more imaginative, it falls short of beauty. 'Lead Me On', with its winding violin and insistent beat, tries hard for peaks and valleys. But whenever the harmonies could be opened up to turn into something extraordinary, the band runs for safety, taking an unambitious route through to the next part of the song, which is – d'oh! - often a repetition of what they've just done.

Bereft of beauty but big on warm, sludgy sloppiness, Tidelands soon turns tiring. 'What Took So Long', just three songs in, quickly meanders into a monotonous refrain and stays there, as does the following song, 'Uncertain'. It's clear that there's a lot of heart in these young Moondoggies – these boys are belting it out – but anything that might be exquisite is buried under the meat-and-potatoes songcraft.

Keen to find something that would make Tidelands seem more than just sweetly forgettable, I focused on the lyrics. But I'd been listening to Pavement earlier in the day, and that had set my standards. Unsurprisingly, anchoring songs in such numbskull koans as “Well, hell, down in the bottom of the well/and in the end, seems so hard to tell” and “Oh, wanna go, I don't know/many people I follow,” fell short. I did enjoy the solipsistic truculence of “I don't expect you to understand/what exactly is inside a man” in 'Empress of the North', though. It was just a shame that what was inside this man was nothing more than “dreaming about your red hair,” along with mentions of the sea, sun and moon. Cripplingly banal, as far as lyricism goes, but either i'm a soft touch or cliché still has power – I caught a distant whiff of the kind of longing that I rely on Vetiver, or even Euros Childs to conjure up, and that was almost lovely.

The album's closer, “A Lot of People on my Mind”, is the one song I'll return to. It's got a solid, moving sentiment, and it's the only time that Murphy's voice effectively stands out against an unobtrusive guitar. But it's not enough; I'm pretty sure I'd be more entertained by the peanut butter kind of Moondoggie.