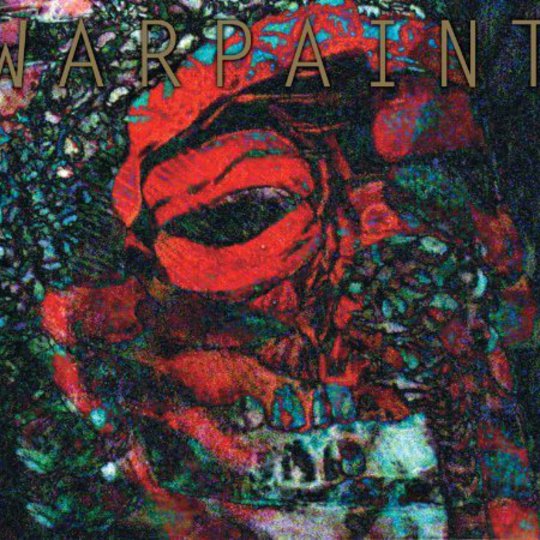 A couple of months ago, I prefaced a review of Everything Everything’s debut album with some waffling thesis attempting to grapple with the fact that the term ‘indie’ is no longer really synonymous with music put out by four piece retro guitar combos on independent record labels. Maaaaaaaaaybe I still believe that, but I guess all the chillwave in the world isn't going to alter the fact that while labels like Rough Trade choose to sign four piece retro guitar combos like Warpaint, then maybe indie is just going to stay plain old indie a while longer.

Now, the term ‘retro guitar combo’ is no condescension. It’s just that on the evidence of debut album The Fool, it’s pretty crystal clear that Warpaint have listened to some Smiths records in their times, more than a smattering of Joy Division, a bit of early Cure, maybe some Young Marble Giants. And if they’re a bit late to the party with regards to reviving this sort of music, that hardly matters when they frequently manage to do it so exceptionally well: certainly the phosphorescent waterfall of guitar drops that ends ‘Warpaint’ the song – you’ve got to love a band with a title song – is exactly the sort of thing that Jonny Marr has annoyed the world by refusing to play for the last quarter century..

In any case, while The Fool’s chilly, chiming dreamscapes hark back to the past, Warpaint have a few distinct quirks to their make up. The key one, maybe, is that the band were actually founded in 2004, and while the line up has changed considerably and an EP (Exquisite Corpse) has been issued, the band are from callow, scrappy youths their heroes were on their early records (The Fool’s gestation was longer than The Smiths’ entire career). There is an incredible level of detail and accomplishment to The Fool. There’s the ominous, pinwheeling arpeggios that streak out of opener 'Set Your Arms Down's hulking metal chassis. There’s near enough everything about the gargantuan 'Warpaint', from its menacing, semi-industrial beginnings, the pulsing shards of feedback, and Emily Kokal and Theresa Wayman's mechanistic pulses of vocal, all an overture for that astounding guitar line that begins to weave and build after the two minute mark. And the strung out, feverish mix of wiry, diamond hard guitar drops and oddly distant playground chanting that ends and begins 'Composure' is a sublimely wrought little piece of music.

Key to such moments is the band's painterly songcraft: The Fool features only nine tracks, most of them around six minutes in length, unhurriedly crafted so that every bit sounds just so - that rattle of floor tom there or this screech of distortion here - never compromised by any urge to write 'the single'. Maybe the band aren’t quite musos, but they're evidently talented musicians to a woman, and they've achieved a level of detail rarely accomplished by a democratic indie band, the type of detail you associate more with control freaks of the Sufjan Stevens or Dave Longstreth mould.

That accepted, I do wonder if the band could do with a benevolent dictator figure, because if there's one thing The Fool is lacking, it’s personality. The band’s line up has changed extensively over the years, and a lot of other people - big names – have put their oars in as well: Exquisite Corpse was produced by John Frusciante (Josh Klinghoffer also played on it), while The Fool, produced by Tim Biller, features additional mixing from Siouxsie Sioux and Andrew Weatherall. Sure, there are moments - notably 'Warpaint' – that are full on ensemble triumphs, but at other times a certain sense of self is absent. The vocals can be telling: when deployed in an instrumental way, they’re generally fine, but when more exposed and conventional – as on ‘Undertow’, or the middle of ‘Composure’ – then Kokal and Wayman’s tones rather disappoint, bland, OC/L Word/Grey’s Anatomy-esque yelps, all nonspecific Noughties North American angst-lite, devoid of the idiosyncrasy of the new wave singers whose music they’ve studied so hard. There’s normally some interesting key change or unexpected shift in musical gear to take the edge off, but these songs lack a centre of gravity, something intrinsically Warpaint. At the risk of appearing mildly sexist, I couldn’t help but think wistfully of The Organ at times, a much less accomplished band of musicians who made the same influences and a singer with a similar range work far more potently, simply because Katie Sketch’s soul was so tangibly seared into the music. The Fool, by contrast, often sounds like it was assembled by a spectacularly talented committee, like the minutes of the recording sessions are probably filed away in a sterile LA duplex somewhere.

Is that what it takes to be a successful retro indie guitar combo in 2010? I’m sure it’s not, but such precision tooling helps if you’re going to be five years or so behind the new wave revival zeitgeist. I should probably end here with some platitude about what the future may have in store for Warpaint, but the truth is I don’t have a clue and they’re doing fine, and whatever they do next will probably be just hunky dory. That said, a bit more soul and a dissociation from anybody involved in the Red Hot Chili Peppers most certainly wouldn’t go amiss.