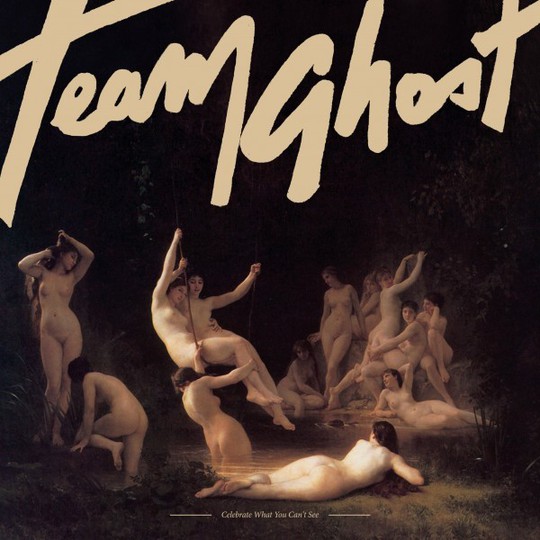 M83. There I said it, and I’m going to say it plenty more in this review. For those not familiar with Team Ghost yet, they comprise Nicolas Fromageau, multi-instrumentalist Christopher Guerin and the producer Jean-Phillipe Talaga. Fromageau was a founding member of M83 along with Anthony Gonzalez, but the two parted ways after 2003’s Dead Cities, Red Seas & Lost Ghosts, an album which many consider their best, although Gonzalez enjoyed increasing popularity (and critical acclaim) with Before the Dawn Heals Us and this website’s album of 2008 Saturdays=Youth. While these records saw Gonzalez take M83 in a warmer, more accessible verse/chorus orientated direction, Team Ghost’s You Never Did Anything Wrong To Me EP sort of picked up where the glacial electro-shoegaze of Dead Cities... left off.

Their second EP in a row, Celebrate… makes the case for the worthiness of the EP in an age where so many artists release an album as soon as they’ve written enough songs. This isn’t to say that the EP feels like a mere prologue to an LP, because Celebrate… maintains the high quality of You Never Did…. Yet these songs wouldn’t have quite worked on one disc, because, without being precious about it, each set of songs has its own dynamics, regardless of the fact that the two EPs bare many similarities. The EP betrays a common trait of Fromageau’s since (and including) Dead Cities…, in that songs are often just one big propulsive surge of drama or drifty - but melodically and emotionally to the point - ambient pieces. These are the sort of songs that need the right tracks round them to emphasise the feeling, particularly given the scarcity of vocals.

This EP's structure is best described as an ambient centre bookended by bursts of melodramatic urgency. ‘High Hopes’ opens the record with rustic music-box plonkiness, shrouded in phantasmal synth strings, but it isn’t long before some searing guitar takes the song soaring into the stratosphere amidst crashing cymbals and bleepy arpeggios. Guitar makes its presence felt much more than on Fromageau’s previous work, usually soaring by in a blur of distortion and delay. ‘Signs and Wonders’ is a case in point, but Team Ghost show their defter touch as the chiming guitars intertwine with treated piano chords which tremble forebodingly as if in anticipation of the imminent onslaught. The increased reliance on guitar is pretty reminiscent of M83’s Before the Dawn Heals Us, but Team Ghost are staying loyal to their atmospheric roots and there’s no hint of the more verse-chorus pop leanings of M83’s most recent output, something enforced by the ethereal electro heart of the EP. The title track utilises an angelic synth choir and other sly electronic touches to distort the timbre and force of a plaintive piano figure in an undulating manner, while ‘It’s Been A Long Way But We’re Free’ retains the ethereal surroundings, but has a sparkling swirl of synth arppegios at its centre, hinting at imminent histrionics before suddenly fading out. The additional song ‘Into My Arms’ renders the EP a predominantly ethereal affair, although Fromageau’s voice takes centre stage and is beautifully adorned with trickles of piano after each breathy line.

Celebrate What You Can’t See effectively reaffirms the straight up quality, as opposed to mere potential, which You Never Did Anything Wrong To Me greeted us with. While it remains difficult to say it really distinguishes itself from the work of Nicolas Fromageau’s former band, there isn’t any real reason why it should. The blueprint M83 made was in thanks in huge part to him and often Team Ghost’s strength lies in their ability to subdue their music flights of melodrama just as they are encroaching. This makes them interesting as a sister band to M83, but they are equally a vital and engaging band in their own right.