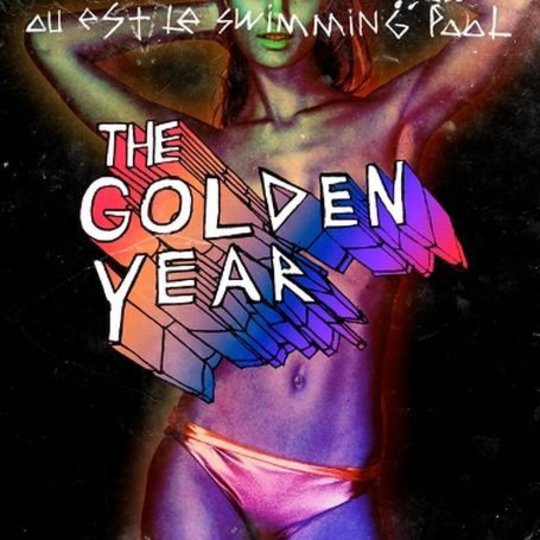 When their singer Charlie Haddon died on August 20th this year, the issue of the release of the debut album by Ou Est Le Swimming Pool paled almost entirely into insignificance. The story of the end of Charlie’s life is an awful one, and there is nothing I can add to it that you haven’t read already. While it would be completely crass for me to talk about The Golden Year without acknowledging the tragedy which preceded it, it would be equally wrong to discuss the album exclusively in the context of Charlie’s death. Chances are that if you’re reading this, then you know the background, and you’re probably here to get an idea of what the record sounds like.

For the most part, The Golden Year sees Ou Est Le Swimming Pool building on the reputation which their previous singles built for them as doyens of punchy synth pop. The album houses a good five or six instances where the band completely and utterly hit their mark from a pop point of view, snaring you with a catchy chorus or insistent synth line and refusing to let go. ‘Dance the Way I Feel’ and ‘Jackson’s Last Stand’, in particular, provide the sort of devastatingly effective thrill out of seemingly simplistic ingredients which so many bands strive for, but which few achieve as completely as this.

When you’ve hit on a successful formula for pop perfection, there’s always a danger of overdoing it, and laying it on too thick with the hooks, which has the inevitable impact of diluting their effectiveness. This is a pitfall which Ou Est Le Swimming Pool sidestep here, because The Golden Year isn’t played out entirely at full speed, with the pop stompers broken up with the odd slowie. While the more downbeat moments like ‘Our Lives’ don’t necessarily show the band playing their strongest hand, they are useful in saving The Golden Year from overwhelming you with boisterousness (aka The Passion Pit effect).

In spite of anyone’s best efforts to separate The Golden Year from its background, it was always likely that there would be one or two moments where its context would result in moments more poignant than the band probably intended them to be. ‘Better’s occasional dark sentiments, although masked by an upbeat melody, make for pretty difficult listening: “The quiet walls are more help than a friend could be”. A similar effect is created by the waves of delicate hope which open up the album on ‘You Started’, particularly its “You have started the beginning of my life” refrain.

Whether or not The Golden Year will prove to be the only album Ou Est Le Swimming Pool ever release is, at the time of writing, unclear, and is something which is a private decision for the band’s remaining members to make in their own good time. Clearly, if they do continue it will be with an entirely different dynamic to that which produced this record, a dynamic which at once shows the finely honed instincts the band possessed even at this early stage, as well as highlighting the potential they had for the future. Hopefully the strength of the album means that this music is what Charlie Haddon will be remembered for, rather than the manner of his death.