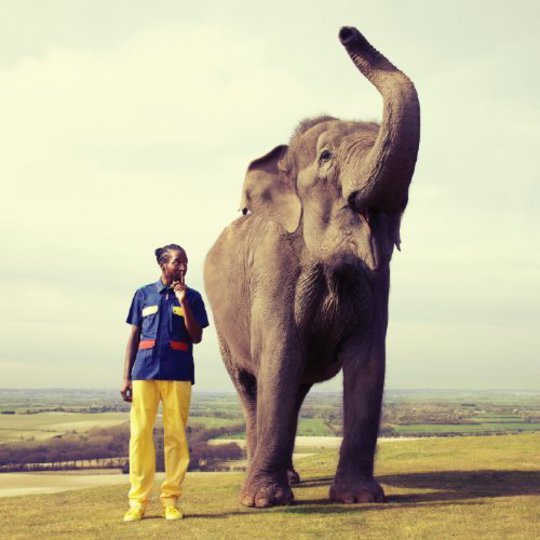 You might have expected the Big Dada label’s previous attempts to grab a slice of the grime pie to put them off touching the scene again. However, the reputation of longstanding producer and MC Jammer as being level-headed and stoic is as pronounced as that of Wiley – who released one album on Big Dada and then flounced off – being an absurd head-the-ball. As such, BD are on firmer ground with Jammer’s long-awaited debut album, which has an ace sleeve featuring our man shushing an elephant and a clutch of tracks with that hallowed ‘crossover potential’ which, during what isn’t exactly a commercial boom time for grime, is something on the to-do list of most figures in the scene.

Notorious as a go-to man of grime, with membership of/affiliation to numerous crews in his time, he’s keen to let you know about it, albeit by means of bigging up the great and the good of the genre. D Double E, Kano, Wiley and Ghetto are all reeled off on ‘The Beginning’, which kicks off Jahmanji and which is one of those tracks that you get on most grime full-lengths, where the protagonist condenses his career to date into a few minutes to self-salute the fact he’s finally got his album done.

While there are a few too many tracks on here that just fly past without leaving much impression, ’10 Man Roll’ is hyperactive and addictive, and has been repeatedly caned in this reviewer’s abode over the last fortnight. Producer Mumdance’s combo of rapid snare cracks and trancey synth riffs works a charm; this is the sort of banger that encapsulates everything (that was) great about grime. Jammer is out on the piss with Skepta, JME and Frisco from Boy Better Know, and their agenda for tonight is to blag into a club, take drugs and, having scanned the crowd to check there’s no wankers who’ll kick off, “get on the mic, say ‘Boy Better Know!’ and shut the whole place down in a rage.” Their collective grandeur is really quite modest, when you think about it: as I say, this is why grime was so damn fresh in the first place, and why all that corny if well-intended Reynoldsian chat about it being a British answer to US street rap took root.

Toddla T, a hybrid-crazed producer whose modest success has arguably spawned folks like Mumdance, gives ‘Back To The ‘90s’ a backdrop that sounds like 20-year-old piano rave would if was made using today’s best digital gear. Why does Jammer want to visit said decade? “Reebok Reebok Reebok Reebok,” he clarifies. Dude there’s this website called eBay, not sure if you’ve heard of it.

For unabashed daftness it’s outstripped by Toddla’s other production on Jahmanji, ‘Party Animal’: this is a massive sample of Adonis’ 1986 house classic ‘No Way Back’ over which Jammer tries to hoover up some of that loose ‘Yates’ Wine Lodge playlist’ cash, post-‘Bonkers’. “Keep jumping! On the dancefloor music’s pumping! If you’ve got a boyfriend just dump him!” Pro tip: being told to have fun tends to make matters less fun.

When Jammer doesn’t have any buddies donating guest bars, the tracks seem… sparse. ‘Max Not Minimum’ is busy as heck rhythm-wise, a relentless glitchy clatter that makes a lot of ‘future garage’ sound fairly workaday, but after 30 seconds or so of his one-paced cackling flow, I basically want to hear someone else. Also, he namechecks Ed Hardy but forgets to clarify that Ed Hardy makes shit, horrible clothes worn only by pricks. ‘Don’t Play With Me’ is pretty much the same deal, suggesting that when Jammer comes up with an especially rad beat he can’t bear to let anyone else bask in its glory. He was a producer for a good few years before approaching the mic, and it kind of shows: he might have birthed some amusing Snoop-ish slang (murkle, neckle, seckle etc) but that doesn’t equal MC greatness.

Jahmanji has two notably contemplative tracks among the bustle and bounce, and they’re two of the album’s highlights. ‘Bad Mind People’ feeds dub reggae into grime with a sympathetic hand and a sweet old-skool dancehall chorus courtesy of Lickle J; later on, ‘One Too Many’ – despite having a backbone of hyper-commercial trance (sounds like the Big Brother theme, in fact) – finds Kivanc overdoing it at a rave and blacking out. He sounds genuinely despondent, and renders ‘One Too Many’ the necessary corrective to ’10 Man Roll’. It’s these highs and lows that make Jahmanji worth an ear, along with a scattered few beats Jammer cooks up. This probably isn’t going to get played from beginning to end too often, though, and not just because of the ADD-addled iPod generation.