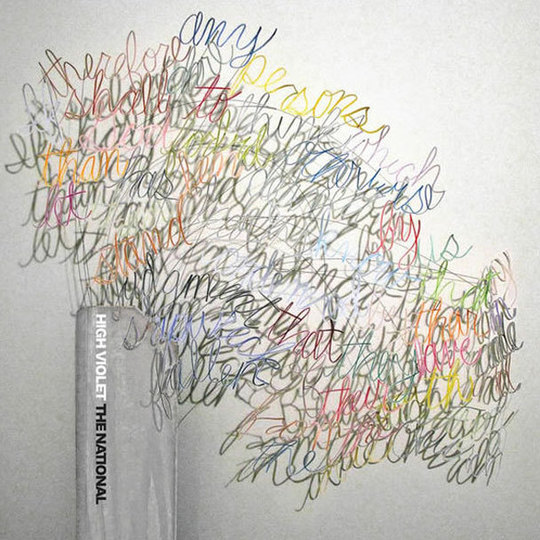 You don’t really need me to tell you that The National’s High Violet is one of the year’s most feverishly anticipated records, nor do you need it rehashed how 2005’s Alligator and 2007’s Boxer revealed their charms gradually, seeping into listeners’ headphones and their hearts long after receiving initial spins. The enduring quality of the New Yorkers’ previous long-players means that whether they like it or not, High Violet comes burdened with heavy expectation. It doesn’t just have to be a good album, it must be a brilliant one; it can’t just be better than what it follows, it needs to be an outright modern classic.

Which could all be construed a little unfair. If anything, it’s massively heartening that a band can take ten years and five albums to manoeuvre themselves into the kind of position The National have, and do it so completely on their own terms. All this in mind, it’s tempting to consider the album completely in isolation, removed from any hyperbole or talk of troubled gestation periods; the perennial debate over which of their two previous is finer, even. Tempting, but ultimately impossible, particularly if you’re the kind to hit up sites like these almost every day, and besides: albums don’t exist in a vacuum. They’re shaped and moulded as much by each individual listener’s experience and state of mind as they are every painstaking ounce of work their makers might have put into them. The only thing I can say with any surety about High Violet at this point is that it will simultaneously meet and fall short of the conjecture and anticipation that surround its release, pleasing as many as it will inevitably disappoint. That, and that it is quite brilliant, in an up all night, listening to it repeatedly kind of way. I mean, it is a new National album, after all.

Let’s start at the end, because to my mind ‘Vanderlyle Crybaby Geeks’ might be the most perfect thing the band have ever committed to tape. For a set that peddles so purposefully in restraint, the unabashed sojourn into waters anthemic does come as a surprise, but it’s all the more memorable for it. When the lush string arrangement finally surges skyward on its second chorus the effect is blindsiding, shiver-inducing: lump-in-throat exhilarating in its splendour. “I’ll explain everything, to the geeks” Matt Berninger sings, at once resigned and hopeful, weary and wise.

Part of what makes ‘…Geeks’ so effective is the relationship it holds with all that precedes it. High Violet is arguably the band’s most instantly gratifying disc to date, but it’s by no means instantly great. It’s a measured, brooding collection that does sound fine on first listen, but so much better on the fifth, and will still be offering fresh snippets of brilliance come the fiftieth. Whether it’s Aaron and Bryce Dessner’s ceaselessly intuitive guitar parts, a bonkers lyric courtesy of Berninger or Bryan Devendorf’s sterling percussive work – or any one of its starry guest players’ contributions, from Sufjan Stevens to Justin Vernon to Richie Reed Parry of the Arcade Fire – The National combine and congeal with single-minded determination here, and highlights are rife, if hard come-by. (Nicholas Dawidoff’s New York Times profile of the group equated the troubled history of ‘Lemonworld’ with their slow ascent to success and man, does it sound arduous.)

But getting back to ‘…Geeks’, which in all of its stately munificence and wonder acts as a literal flipside to ‘Terrible Love’, the opening track. “Loose wool and hot tar” is the sound the band strove for, and the layered, sonorous swirl that peaks (or rather, doesn’t quite) somewhere around the record’s four-minute mark in a mélange of voice and instrumentation really captures this woolly side. Berninger’s desperate lines regards “walking with spiders” and breaking oceans neatly encapsulate the uneasy thrill that lies at the outset of any romantic endeavour, as well as introducing the recurring motif of water that haunts the record.

Over the nine songs that lie between these two, The National fashion malaise and distance into something darkly beautiful. Some pretty gloomy locales are traversed here, but High Violet’s oppressive nature rarely tips into the stifling – even on ‘Afraid of Everyone’, where deep woodwind furnishes Berninger’s familial concerns with rich undertones, or ‘Sorrow’, with a first line that could be lifted straight from any New York-set Bildungsroman (“Sorrow found me when I was young / Sorrow waited, sorrow won”), enough light and shade is maintained to entertain unreservedly. When Berninger declares “I don’t want to get over you” on the latter it sounds almost victorious, and even the ominous lyrics that unshell ‘Conversation 16’ (“I think the kids are in trouble…”) sidle up next to dark humour, inimitably delivered in Berninger’s distinctive baritone. That Berninger has a young child is something that has impressed itself onto his tightly constructed snapshots, tangibly upping the stakes to just about everything in a manner I can only imagine is familiar to any new parent.

‘Runaway’ plays like this record’s counterpart to ‘Racing Like a Pro’; as recently discussed, it’s more of a holdover from the Boxer era than anything else here. Over warm brass, picked guitars and strings, Berninger’s deployment of the line “We don’t bleed when we don’t fight / Go ahead, go ahead / Throw your arms in the air tonight” illustrates exactly why it is The National have come to be beloved by so many in precisely 1,040 words less than this review hopes to. Elsewhere, ‘England’ rises and swells like, well; like hot tar, spinning sadness into something oddly triumphant, ‘Bloodbuzz Ohio’ comes on like the swarm of bees that carry its perplexed narrator, ‘Lemonworld’ is a lesson in oblique sumptuousness, and from the squalls of noise on which it enters to the stabs of contrapuntal bass that serve as its foundation, ‘Little Faith’ is positively hair-raising.

Perhaps the greatest compliment you can pay the album at this stage is to assert that it makes good on those impossibly high expectations mentioned earlier, subtly redefining the band’s sound all the while. An easy grandeur is present throughout, as is a sense they are following an increasingly individual, carefully textured path. It is a wild, vivid romance that The National make their own, and on High Violet it sounds just as striking, just as wild, just as vivid as ever.