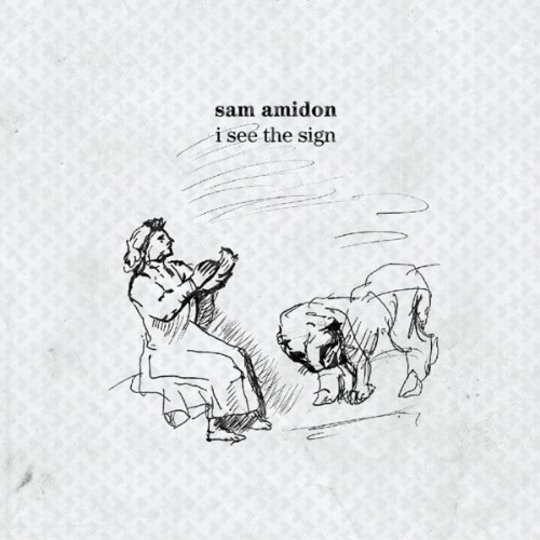 I'll keep it short, because the more time you spend reading this, the less time you have to listen to Sam Amidon's new album, I See The Sign, and it would really be a shame if you didn't spend the next occasion you find yourself alone in the company of these friendly, forgiving, firelit songs.

At a time when it's somewhat fashionable to pretend you grew up on a farm and did nothing but twang a banjo, chew corn and eat mudpies (I'm looking at you, Mumford), it's pleasing to hear a set of songs that resonates with a genuine hearthside warmth and heath-begotten bluster. Amidon's music has always sounded countrified and uncollared in the best and least cheesy of ways, but there's a maturity to I See The Sign that wasn't quite so evident in his three previous ventures. (And yeah, saying that whoever's latest album is more 'mature' than its predecessors is so overdone, but if you'll forgive me and think of the word in terms of someone having let something alone and allowed it to ferment in a slow, unmediated process, rather than of someone forcibly trying to sound older and wiser than they are, then you'll get my gist. Y'know, it's like wine. Or whiskey. Pour it, plug it, leave it to define itself. See what it comes up with while you're busy with something else.)

So anyway. Perhaps this seasoned dimension to Amidon's output owes its dues to I See The Sign's Icelandic producer and Bedroom Community bedfellow, Valgeir Sigurdsson, and the way he executes an expert face-off between Amidon's creaky, calcified voice and Nico Muhly's quixotic arrangements for bare-boned chamber orchestra; or perhaps it comes from the way Amidon allows guest Beth Orton her own space to vocalise in a gentle, ghostly manner that's both independent of yet crucial to his own lines, rather than using her simply as a backing singer. Or! Perhaps it's in the also-delicate balance of history – in the childrens' singing games and the Bessie Jones originals that he covers – and Amidon's own antiquated-sounding yet modern compositions. Whatever: as with all of your favourite records, the coy, secret core of this album remains unquantifiable, unidentifiable, and it's always just best to listen, to wrap yourself up in it, rather than analyse, rather than interrogate.

'How Come That Blood' opens proceedings, instrumentalist Shahzad Ismaily's Moog acting up so deep and gluggy that it's more or less a double bass; it thumps with arterial fury as Muhly's strings quiver. Innocent-seeming at first, the song is, toward its finish, mashed and manipulated by Ismaily – then swallowed, staunched, stopped. The title track, Amidon's own composition, exhibits a gift for painting pictures so briefly and powerfully – “loose horse in the valley” – that they're branded on your psyche even as the scene morphs into something else (“Said I run to the rock / Rock cried out / No hiding place”). Not dissimilar to some of Bill Callahan's best moments, it's as close and intimate as correspondence.

Throughout, Muhly's animated arrangements are more bold than bucolic, although there's a little of the latter in the boisterous 'You Better Mind', the bashful 'Pretty Fair Damsel' and the momentous, closing organ chords of finisher-upper 'Red'. Amidon's reworking of 'Way Go, Lily' could be at peace among the tracklisting of Arthur Russell's Love Is Overtaking Me; between the verses, Muhly's reed instruments comment sadly to each other, an optimistic horn countering their baleful glances.

Overall, this at-first-shy but eventually overpowering record will make yer cheeks sting with wine and late-night gales; and, as I've already said but feel sort of compelled to reiterate, it's so refreshing to hear, during an episode in popular music that seems to have made commodities of all things 'rustic' and 'rural', a record that reclaims both of these things for the complex and age-old symbols they are. I See The Sign is a telling of timeless tales that's matched easily to these first summer twilights. And I didn't keep it short. Oh well.