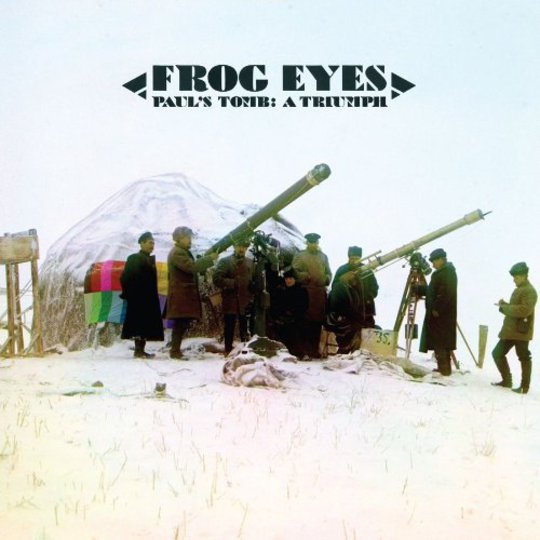 The most amazing thing about that interbred indie music scene from British Columbia, Canada is that nothing that has emerged from it has been discernibly awful. From Wolf Parade, to Sunset Rubdown, to Handsome Furs, to Swan Lake, to Frog Eyes, and all the rest, quality prevails. It might have something to do with the sharing of members, or the similarity between the sounds of the bands (and those factors are clearly interlinked), or that separately and together they've forged their own identity as a scene – something clearly on the 'indie rock' (sicks in mouth) spectrum, but somehow apart from it too.

Frog Eyes definitely exist within that definition, the music resembling Wolf Parade but with a greater awareness of space. Paul's Tomb: A Triumph is less frantic than previous record Tears Of The Valedictorian. It sees them revel in the journey. It also puts the vocals at the core of their sound. Without lyric sheets it's hard to say exactly what is going on here with the words, strangled as they are in guttural yelps and off beat accenting. It ends up naturally distorting the words. Carey Mercer's voice is the fulcrum around which everything else happens. The guitars and drums and keys are built around the echoes and the layers, the whoops and stutters. These songs aren't sung. They're performed. Mercer lives his vocals, and brings what could be flat indie into vivid, vibrant Technicolor. It might be pretentious to say it, but the performance is almost operatic.

The tempo is somehow controlled by that voice too. When it's excised from proceedings you see what's underneath – shimmers of guitars, gentle slivers of piano. Fragments. That croon helps to bind it all together. 'A Flower In A Glove' is treacly slow really, but whenever Mercer appears things feel faster, more stimulated. It's by the vocals that this record will be judged - they're one of those set of pipes that'll divide audiences (like so many bands these days). Without them this would just sound like a Wolf Parade tribute band.

That's not to label Frog Eyes derivative of their own scene, to say there aren't some brilliant tracks here. 'The Sensitive Girls' towers, vocals fast, hollering, the guitar parts churning like Sunset Rubdown circa Random Spirit Lover (which fits well when Spencer Krug is an ex-member). 'Rebel Horns' sound like it could be a single, its perky little bassline gradually taken over by Wolf Parade-esque layers of guitars that build and build, until they're replaced by a solo that falls just on the right side of sounding 'wrong.' It's almost a tamer version of Volcano!'s anti-melodic and arrhythmic guitar playing. 'Lear, In The Park' is a lull, a wispy flickering guitar led instrumental that acts as lungs, letting the listener (and Mercer) catch breath, before things surge back with 'Styled By Dr Roberts.' It starts off faster, with discernible lyrics including “You hit 'em in the fucking knees” and “Shooter, shooter, shooter”, before dissipating into guitar shrapnel and a slow drum pulse.

Paul's Tomb: A Triumph has two distinct modes – those slowburn instrumental passages, and the lyric driven, quicker, melodic segments. Frog Eyes succeed when the joins between the two really 'flow', when the segues work. The contrast between them generally keeps things interesting, with the vocalless parts showcasing the intricate layering and musicianship behind the more showy, affected singing. Occasionally, though, the songs drift too long in more ambient streams, even when they've started with the impetus and momentum of a raging torrent and they ebb away into aimless meanderings. In shorter bursts the slacker moments allow time to reflect and to delve into the mesmeric guitar lines. You can't escape the feeling, though, that this record is at its best when it is direct, when Mercer spews out gargled lines like a fountain, when it all clicks just so.