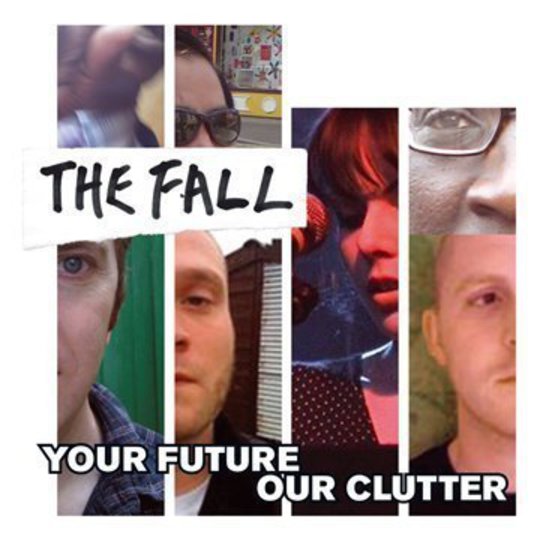 The pro forma approach to reviewing a new album by The Fall in the 21st century is to declare it a return to the band’s glory days, wherein Mark E Smith recruits a group of young bucks who really ‘get’ the groundwork laid down by the likes of Craig Scanlon and Steve Hanley, while simultaneously riddling Smith's lyrics with just the right amount of spit and bile. There won’t be any such claims for Your Future Our Clutter here. These are certainly strange times for The Fall — a lengthy gap between releases, a relatively stable band lineup, and even rumours that new label Domino rejected an earlier version of this album. But it would be difficult to call this a return to form when that ‘form’ has rarely ebbed since Are You Are Missing Winner in 2001.

Instead, this is another impressive set of songs knotted with obtuse meaning, buttressed by abraded guitar lines from Peter 'PP' Greenway, scuffed into malformed shape by Dave Spurr’s bass rumble, and fueled by a warm analogue purr from Elena Poulou. The latter even provides one of the best pop moments on a Fall record in recent times with her Brix-like “ah-ah-ah-oooh” vocals on ‘Hot Cake’. Lyrically, there’s a heavy health/hospital theme that unfolds throughout, presumably an allusion to Smith breaking his hip for a second time, which memorably caused him to appear on stage in a wheelchair — not the first occasion that’s happened. The Fall singer could probably write a short book on how to navigate the world’s stages on two wheels.

Your Future Our Clutter begins with ‘O.F.Y.C. Showcase’, which operates as an inadvertent masterclass on how to pile on pressure in just under six minutes. Smith opens by muttering something about ‘Archibald Yates’, a character he returns to on ‘Mexico Wax Solvent’. It takes about a minute and a half for the track to really hit its stride, but when it does it sounds like Smith is sending his troops out of the trenches, with the tension strung between each instrument resembling a gloriously distended ruck interpolated by the players, who cleave a prodigious path of most resistance all the way through the song. Sometimes you hear about manhole covers in Manhattan exploding into the sky when a giant steam pipe bursts, and this is like that — with The Fall locked on tap for an unaccustomed two-year break and then finally being able to loosen a great spew of singular, fearless, confident art onto the world once again.

The early songs continue in a similarly indomitable vein. ‘Bury Pts. 1 + 3’ begins like a muddy footprint being forced through a fax machine, only for Smith to grab it by the lapels to force some strident cohesion into it. ”I’m from Bury”, he snarls, before making reference to the Uncut interview that got him investigated by the RSPCA. Amusingly, the song has even landed a mention on Bury’s Wikipedia page. Archibald Yates resurfaces on ‘Mexico Wax Solvent’, which is more melancholy than recent Fall outings, largely due to the analogue bloops from Poulou and a lightness of touch from Greenway. It doesn’t quite stretch back to the overt pop of ‘Free Range’ or ‘Telephone Thing’, especially when a glob of spaghetti-like noise is dumped on the song toward the end, but it’s not far off those rarefied chart-troubling days of yore.

That pop nouse resurfaces on ‘Hot Cake’, which follows the Daft Punk-sampling and oddly un-Fall like Bo Diddley meets Morricone interlude of ‘Cowboy George’. This is the Fall refined and condensed down to a wonderful three-minute spurt, with Smith sticking his lyrical finger in your eye by opining ”my dialogue is stock”, when it’s clearly anything but. From there we’re taken into a markedly more downbeat close to the record. ‘Y.F.O.C./Slippy Floor’ initially feels like a rote Fall stomper, but reveals greater depth with repeat plays, especially as the song is full of pointed references to the singer’s recent battles with the medical profession. ”This new approach is on the borders of necessity” he claims, and then builds on it in the following ‘Chino’, in which he asks, ”when do I quit this hell/when do I quit this hospital?”. It’s safe to say that Mark E Smith would be a difficult patient to have on your hands if you were a doctor.

If this is Smith’s album where he grapples with his own mortality, and it certainly seems that way from the predominant lyrical conceits raised, it couldn’t end more perfectly than ‘Weather Report 2’. This is The Fall returning to ‘Bill is Dead’ territory, where Smith taps into a fragility that he usually veers away from, scratching all the musical soot out of his eyes for a few minutes to draw us closer to Mark E Smith the person. Initially it’s uncomfortable — Smith intoning ”you gave me the best years of my life” is a feeling akin to a new friend revealing a family secret when you barely know them. ”The whirlpools get wider and wider”, he says, before ending with two of his best lines in recent memory: ”Nobody has even called me Sir in my entire life”, he claims, before closing the album by whispering, ”you don’t deserve rock & roll”.

The fact that Smith rarely untangles The Fall from the cryptic absurdist approach that has become his stock-in-trade, to head toward this type of profoundly personal material, only makes it that more affecting when he actually does deviate from his path most traveled. If The Fall do have one key similarity with John Peel, it’s that it was always difficult to imagine the world without both of them in it. But with Smith asking “When do I quit? When do I quit?” throughout ‘Chino’, he nudges us closer to the distinctly uncomfortable and alien (and not to mention, wholly unwelcome) proposition of The Fall shuffling permanently out of view along with their biggest acolyte. Cherish him while he’s here. We won’t see his like again, and future generations will look back with considerable envy that we got to be around when an album that could so effectively eviscerate our expectations of what music is and can be was released by a band entering its fifth decade of existence.