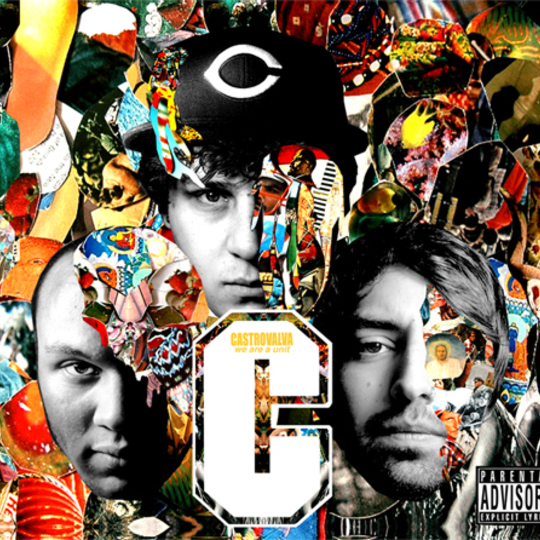 The singer ploughs into the crowd, until the only evidence of his presence is the taut lead of his microphone and the hysterical screams that are pealing out of the PA. I crane my neck to catch a glimpse of the carnage, but it's hard to keep sight as he leaps onto the chintzy-looking seats and somersaults over the glass-strewn tables of the club. Turning back to centre stage, the rhythm section are impassive, face to face, beating out a perfect soundtrack to the third's offstage antics; minimal, loud, and heavy.

It's pretty hard to escape just how good Castrovalva are live. The deafening, swaggering roar of their music was made to be loud, fast, and as sweaty as possible. The problem with many bands of their kind, however, is that when it finally comes down to getting their cacophony down on wax, something...the passion, the adrenalin, the smell of stale Carlsberg soaked into matted carpet...some indefinable quality is missing.

We Are a Unit is Castrovalva's first LP as a three piece, promoting sometime band artist Leemun Smith up to the mic and perhaps as importantly, from collaborator to visionary. As a two-piece, bassist Anthony Wright and Drummer Daniel Brader played many of the songs here as instrumentals, and it worked; they made a name for themselves as one of the premiere bands of the Leeds houseparty scene, their angular, breakneck grooves packing out sweaty basements wherever they roamed. But with the addition of Smith, they've stumbled upon pure alchemy.

His penchant for ghetto imagery and hip-hop tropes has also given the band a much-needed aesthetic, and his devil-child persona is in turns charismatic, cocksure, and downright terrifying.

Elsewhere, the versatility of Wright's bass surprises at every turn, from the eerie squeal of 'That's What I'm Talking About' to the FM radio-funk of 'Unit Radio' and the "is-that-a-saxophone-or-is-it-a-bass?" parp of 'Hooliganz R Us'. Brader's drums have a way of tumbling out of the speakers sounding thrillingly close to collapse, and shift from hardcore beatdown to hip-hop boom-bap on a blade-edge.

At only 27 minutes long, and with so many changes of pace and style, We Are a Unit is a breathtaking listen. But it's this brevity and diversity that allows Castrovalva to shine where other fearsome live acts have failed - to make a record that does their performances justice. Maybe you can't see the sweat on their brows or feel the cheap lager being thrown overhead, but whenever this album comes clattering into your ears, your gonna have to be fighting pretty damn hard not to be doing some table-somersaulting of your own.